US Secretary of Defense Carter to visit Turkey 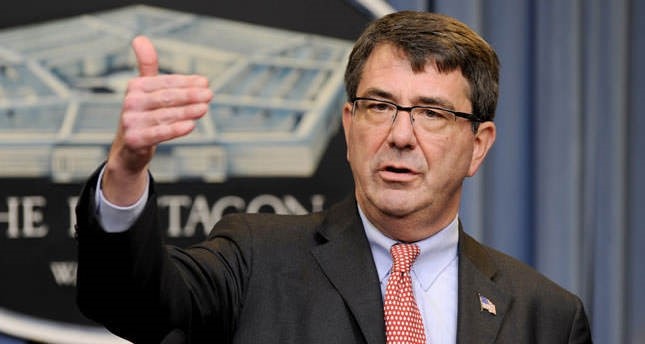 The U.S. Secretary of Defense, Ashton Carter will pay a visit to Turkey on Friday, October 21, the department said in a statement published late Tuesday.

In addition to Turkey, the secretary will also travel to the United Arab Emirates, France and Belgium between October 20 and 27 to meet with "key partners in the campaign to deliver Daesh a lasting defeat," the statement added.

Carter will also participate in his fifth NATO defense ministerial as secretary of defense.

"The secretary will begin his trip in Friday Oct. 21 in Turkey, a key NATO ally and member of the Counter-Daesh coalition. He is scheduled to meet with Turkish leaders to discuss a range of security challenges in the region including the latest developments in Iraq and Syria," the statement said, adding that he will then head to the United Arab Emirates for meetings with Emirati leaders.

"On Monday Oct. 24, Secretary Carter travels to Paris where the next day he will co-host the latest meeting of defense ministers from the countries contributing the most to the Counter-Daesh coalition. He and his counterparts will discuss the latest developments in the campaign to deliver Daesh a lasting defeat, including the start of the fight for Mosul," the statement further added.

Secretary Carter will conclude the visit by participating in a joint press conference with French Minister of Defense Jean Yves Le Drian, according to the statement.

"The secretary will wrap up his trip Oct. 26 by attending his fifth NATO defense ministerial in Brussels, where he will meet with his counterparts to build on the results of the July NATO Summit in Warsaw. He will open his visit to Brussels with a major speech on the NATO alliance and its future," the statement concluded.