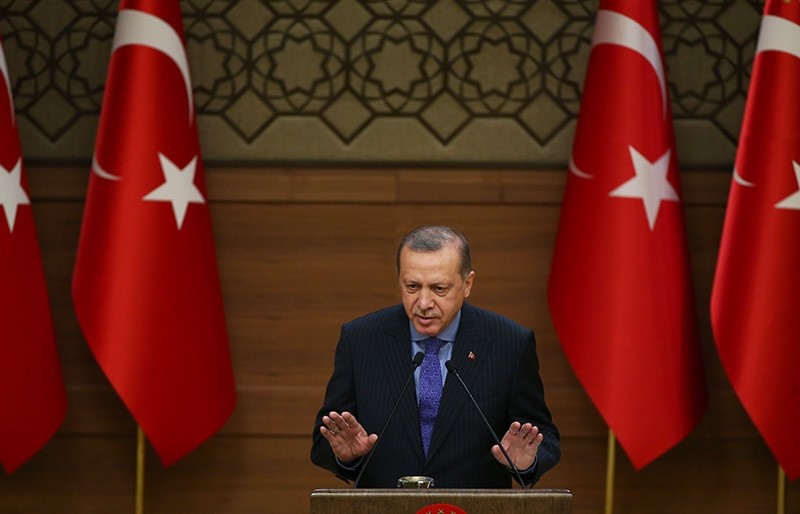 President Recep Tayyip Erdoğan said Wednesday that Turkey has employed new understanding when it comes to counterterror operations, stressing that the government will take necessary steps to eliminate all terror threats before terror groups take action.

Addressing village headmen at the Beştepe Presidential Complex in Ankara, the president said that Turkey will no longer follow what he called the "wrong security approach," saying that "From now on, we will not wait for troubles to come knocking on our doors."

Underlining that Turkey has been through difficult times both politically and economically, the president said that the Turkish people have suffered for many years due to internal conflicts which he referred to as "brothers killing brothers."

"We have lost thousands of our people due to brothers fighting each other. We do not want to pay a price anymore. I am announcing this today; from now on, Turkey has left its wrong understanding of security behind."

Erdoğan highlighted that Ankara's new counterterrorism approach will tackle the problem at its source rather than dealing with the consequences of the terror threat.

"No matter where these groups are, where they have found shelter, we will go and deal with them there and destroy them. Do we have a threat in Syria and Iraq? We will destroy the threats right there. From now on, we will eliminate the PKK from where it is hiding, whether inside the country or outside the country," Erdoğan asserted, while urging other states to cooperate with Turkey against terror groups.

The president underscored Ankara's willingness to clear Daesh from its borders, saying that Turkey has informed related states of Operation Euphrates Shield but that this should not be interpreted as a request for permission. Erdoğan also criticized the countries that oppose Turkey's participation in the Mosul operation, saying, "There is a tactical problem here. It is Turkey's operation launched two months ago that has revealed the game played here, which has caused the loss of nearly 600,000 people in the past six years. Those bothered by Turkey's involvement in the Mosul operation are the same ones who are bothered by our exposition of the game played in Syria. The PKK and FETÖ are also playing the roles that were given to them as part of the scenario. The real matter here is that there is a restructuring of the region going on."

Reiterating Ankara's position on participating in the Mosul operation, the president underscored that Turkey's intentions are driven solely for the protection of Turkey's national security and not against Iraq's sovereignty.

"We want to solve Mosul's problem in Mosul. If we let Mosul be sacrificed to a sectarian strife, then we will not be able to stop the problem from reaching our borders," Erdoğan said, referring to Turkey's position against any sort of sectarian clashes in the region. Criticizing the Iraqi prime minister's recent remarks denouncing the presence of Turkish troops in the Bashiqa camp near Mosul, he said that allowing Shiite Iraqi troops to conduct the operation rather than local forces is a dangerous move, which could cause sectarian clashes.

The population in Mosul, Iraq's second largest city after Baghdad, is largely comprised of Sunni Muslims including Arabs, Turkmens and Kurds. Ankara's warnings to Washington and Baghdad of the sectarian clashes that could erupt from the allocation of power to Shiite forces in a predominantly Sunni region have fallen on deaf ears.

Meanwhile, an agreement between Turkey and the U.S. on the participation of the Turkish air force in the Mosul operation as part of the U.S.-led coalition has been reached, the president also said.

Commenting on the developments in Aleppo, he warned that any refugee exodus from Aleppo could result in at least 1 million people fleeing to Turkey. Erdoğan said Turkey cannot cope with this additional burden alone, adding that those who trigger such a refugee influx have to consult Turkey on its consequences.

Erdoğan said the main issue in Tuesday's phone call with Russian President Vladimir Putin was Aleppo. "He said that as of 10 p.m. air bombardment was stopped. They appealed to us regarding evacuating the Nusra Front from Aleppo. We have reached a consensus to give our friends necessary instructions on evacuating the Nusra Front from Aleppo and maintaining the peace of the people of Aleppo," Erdoğan said.