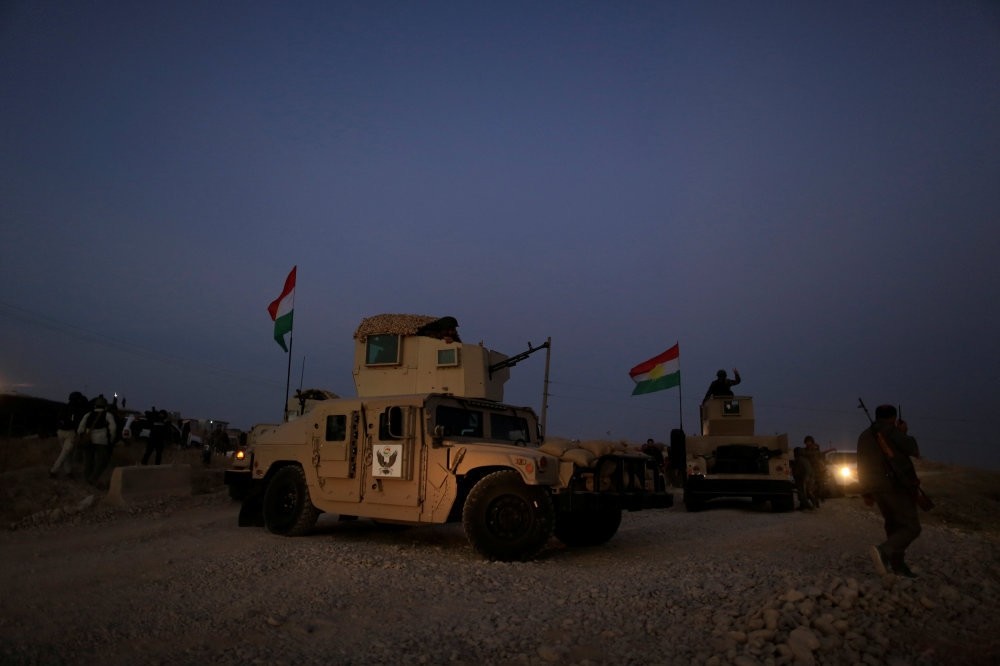 The Iraqi army has not lived up to expectations and suffered heavy losses against Daesh, while peshmerga forces have already liberated around 12 villages and continue to move quickly toward Mosul. Nineveh Guards in the peshmerga forces asserted that sectarian policies followed by the Iraqi government and a lack of cooperation was created problems for the operation

Having liberated nearly 20 villages from Daesh militants, at the beginning of the Mosul operation, peshmerga forces Thursday launched a major offensive by striking Daesh forces from three fronts in the northern part of Mosul.

Daily Sabah covered the latest developments in the offensive from the Bashiqa region in the early hours of yesterday as the peshmerga took action to drive Daesh out of northwestern Mosul. A high-ranking peshmerga commander told Daily Sabah that at least eight villages were seized, bringing the total liberated villages to 30.

The peshmerga forces were proud and satisfied after the first day of operations. Around 12 villages were liberated and the forces moved quicker than expected.

In the beginning, the plan was clear. The peshmerga forces were supposed to do their thing and leave the rest to the Iraqi army and the Nineveh guards. However, the Iraqi army has not lived up to expectations, suffering heavy losses against Daesh and making very minor advances.

Hawker, a 24-year-old peshmerga member, said morale within the forces is high. "We are confident in ourselves. We fight Daesh and will drive them out very quickly. We will do the same here in Bashiqa," he asserted. There are hundreds, maybe thousand, of peshmergas in the Narawan village. Not only teenagers but also the elderly took part in the offensive to sweep out Daesh. Even though the exact number was not announced by the peshmerga, many ambulances were seen rushing to hospitals from the Bashiqa front.

Daesh has been trying to deal heavy blows to the peshmerga and the Iraqi army with IED's (Improvised Explosive Devices), traps and suicide vehicles. The terrorist group yesterday attempted to launch suicide attacks as well. However, The peshmerga forces thwarted the attacks.

The Iraqi central government follows sectarian policies and does not give any support to the Nineveh Guards, a spokesperson for the guards told Daily Sabah in an exclusive interview. "Shiite people control the Interior Ministry and Ministry of Defense. This is why we do not get any help such as weaponry, men or money," Zubair Cuburi said.

The Nineveh Guards are supporters who will move jointly with the Iraqi army in the second phase of the Mosul operation to liberate the city. However Cuburi drew attention to the lack of cooperation between the Iraqi government and his group. When asked about whether the Iraqi army is lending a hand to the Nineveh guards, Cuburi quickly replied, "No, nothing."

The group has been trained by the Turkish military in a military camp based in Bashiqa, which has led a diplomatic crisis between Ankara and Baghdad. Cuburi pointed to the Iraqi government as being at fault for allegedly following sectarian policies. "The reason why we do not receive any support from Iraqi government is sectarianism. Nothing else," he concluded.
Last Update: Oct 20, 2016 7:20 pm
RELATED TOPICS