PKK leader justifies killings of politicians, threatens to do more 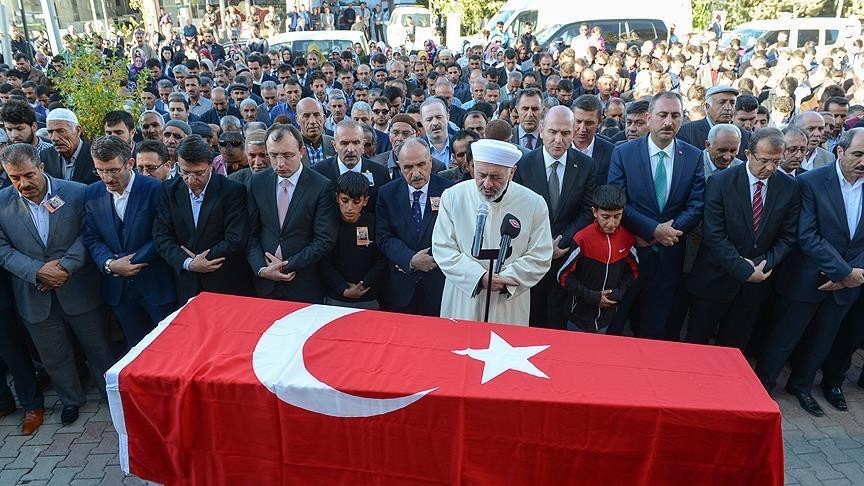 Funeral of Aydu0131n Muu015ftu, the AK Partyu2019s deputy head in the district of u00d6zalp of the southeastern province of Van, was found dead in his home after being ambushed by PKK terrorists.
by Daily Sabah Oct 20, 2016 12:00 am
The leader of the PKK Murat Karayılan claimed responsibility for the assassination of two district-level politicians and a state administrator in southeastern Turkey and threatened other administrators and politicians in the region with death, in an interview with Kurdsat News TV channel on Tuesday.

As the organization's attempts to take the war to urban areas collapsed due to the successful counterterror operations and the lack of cooperation from the people in the region, the PKK has introduced a new strategy in their terror campaign, assassinating Kurdish political figures who refuse to adhere to their policies.

In early October, two district-level politicians from the ruling Justice and Development Party (AK Party) Deryan Aktert and Aydın Muştu were assassinated by the PKK.

"These were not politicians but abettors of the Turkish government. Our people should know that these politicians will not be forgiven and will be punished by the guerrilla after this time. We will continue to take action against people who carry out politics under the roof of the AK Party," said Karayılan.

On Sunday, a councilman of Erciş Municipality who was appointed in a state decree Mehmet Şerif Doğu was also assassinated by the PKK in the front of his home.

Just one month earlier on Sept. 11, the mayors of 29 municipalities were charged with various crimes, including being members of a terrorist organization, aiding and abetting terrorism and financing terror, and were replaced by state administrators through a governmental decree. Twenty-five of the 29 mayors replaced are accused of having links to the PKK while the remaining four have alleged links to the Gülenist Terror Group (FETÖ). The said 25 mayors were members of the pro-PKK Democratic Regions Party (DBP), the local wing of the Peoples' Democratic Party (HDP).

After the decree, co-chairman of the Peoples' Democratic Party (HDP) Selahattin Demirtaş and Karayılan threatened state administrators, with Karayılan pointing to administrators as targets and Demirtaş saying they will not allow the administrators to fulfill their duties.
Last Update: Oct 20, 2016 11:52 am
RELATED TOPICS