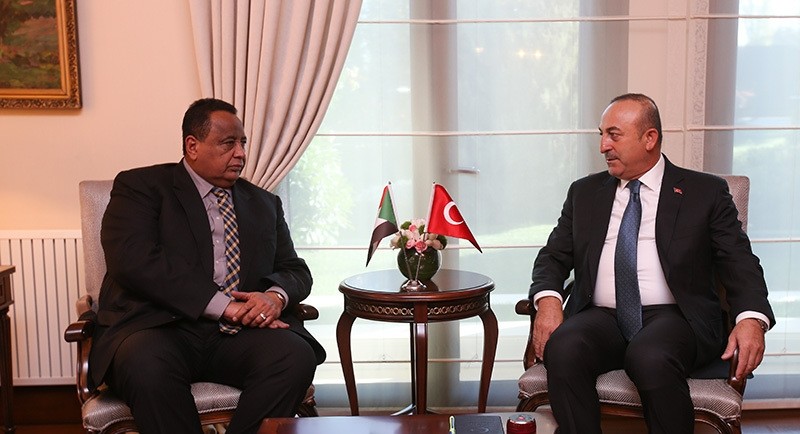 Following the deadly attacks carried out by regime forces loyal to Bashar al-Assad against Turkey-backed Free Syrian Army (FSA) fighters in northern Syria on Tuesday, which killed two and wounded five others, Foreign Minister Mevlüt Çavuşoğlu asserted on Wednesday that Turkey's fight against Daesh terrorists under Operation Euphrates Shield in northern Syria will continue. He further noted that the operation will extend towards al-Bab in an aim to establish a safe zone in the region. Speaking at a joint press conference with his Sudanese counterpart Ibrahim Ghandour in Ankara, Çavuşoğlu criticized the Assad regime for targeting the opposition forces that are fighting Daesh terrorists in Syria, instead of fighting terrorists.

Underlining that the regime and its supporters are concerned with neither Daesh nor al-Nusra, Minister Çavuşoğlu stressed that "such attacks will not halt our fight alongside the FSA under the coalition against Daesh, and the Euphrates Shield operation will continue." He reiterated that Turkey's aim in Operation Euphrates Shield is to completely eliminate Daesh from the region, as he said: "this operation is to extend towards al-Bab and we must declare this region a safe zone if we want the [Syrian] people to return there freely and continue their daily lives. This operation [Euphrates Shield] must continue and will continue."

In regards to a possible Raqqa operation, following a meeting with Albanian counterpart Ditmir Bushati, Çavuşoğlu on Tuesday stated that, "We [Turkey] can provide special forces towards a possible operation for the permanent peace of Raqqa." However, Çavuşoğlu once more stressed that Turkey urges that the operation be conducted with local forces in Raqqa, not including the PKK or its Syrian armed wing People's Protection Units (YPG).

Earlier this month Turkey sent a delegation to Iraq to discuss recent developments between the two countries, including the Bashiqa camp and Mosul operation. Çavuşoğlu informed the media that Turkey is now awaiting the arrival of an Iraqi delegation, while noting that there is no specific date set for the visit. Touching upon a recent report that the extremist Hashid al-Shaabi group in Iraq was advancing towards Tal Afar, which is mainly inhabited by Turkmens, the minister said: "If the developments there become a threat to our own security then we will take all the necessary measures to protect our own security. This is our right within the framework of international law." Çavuşoğlu further reminded the public that Turkey will not remain dormant if any attack is made against civilians in the region, especially Turkmens.

As both the Sudanese and Albanian foreign ministers expressed their solidarity and support to Turkey following the vicious failed coup attempt on July 15 by the Gülenist Terror Group (FETÖ), Minister Ghandour said, "The security of Turkey is a red line for Sudan." The Sudanese government ordered the closure of all FETÖ charter schools in Sudan in early August and in light of this, Ghandour urged other African states to do the same with FETÖ-affiliated institutions. In addition to the Sudanese minister's remarks, Albanian Foreign Minister Bushati stated, "A strong Turkey is not only important for Turkey but also for the security of the region and Europe."