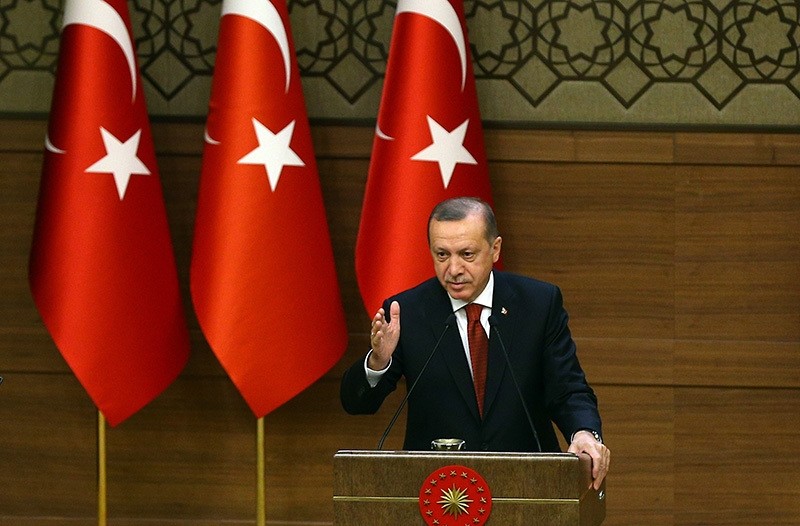 As the Turkey-backed Free Syrian Army (FSA) continues to clear the Daesh terror group from Turkey's southern border in northern Syria, Ankara has expressed its determined anti-terror stance against all groups it considers national security threats.

President Recep Tayyip Erdoğan reiterated Ankara's position on Wednesday, saying Turkey is determined to clear the PKK's Syrian offshoot, the People's Protection Units (YPG), from the northern Syrian town of Manbij after clearing Daesh from al-Bab, referring to the town located some 35 kilometers northeast of Aleppo.

Speaking to neighborhood headmen (muhtars) at the Beştepe Presidential Complex in Ankara, Erdoğan said, "They will either leave the region immediately, move to the east of the Euphrates [river] or we will do what is necessary." Clearing al-Bab from Daesh terrorists and forming a terror-free zone of 5,000 square meters, comprising the towns of al-Bab, al-Rai, Azaz, Jarablus and Manbij, was acknowledged as the final objective of Operation Euphrates Shield, launched on Aug. 24.

Erdoğan said that Turkey has also added to its agenda the clearing of terror organizations from the area lying south of Kilis province to the Kırıkhan district (of Hatay province). "Are we going to turn a blind eye to the terrorists coming from that region, carrying out attacks in our country and running back to Syria? It should not be forgotten that this is a matter of sovereignty for us," the president added. The area, which includes the town of Afrin, has been controlled by YPG since 2012, when forces loyal to Assad withdrew from the area and handed over control to its ally the Democratic Union Party (PYD), along with other border areas in the north and northeast.

Ankara considers the YPG a terror group, an offshoot of the outlawed PKK, which is itself listed as a terror organization by the U.S., Turkey and the EU. Turkey has voiced concerns over the YPG moving into Manbij, which has a predominantly Arab population. Turkey has also warned against YPG's aim of making demographic changes in areas captured from Daesh. Meanwhile, the YPG presence has become a matter of political friction between Ankara and Washington. Ankara argues that U.S. support to the Syrian Democratic Forces (SDF), predominantly led by the YPG, is eventually transferred to the PKK and ultimately used against Turkey.

On Aug. 24, Turkey launched Operation Euphrates Shield to clear the towns of Jarablus, al-Rai and al-Bab from Daesh, while preventing the YPG from extending its control over these towns.

The president also said that Turkey's military operations in Syria aim to secure control of the towns of al-Bab and Manbij but are not intended to stretch to the city of Aleppo. He added that Turkey's wish for Aleppo is the establishment of peace in the city and for it to be controlled by its locals. Erdoğan also warned that the refugee influx from Aleppo directly affects Turkey's southern border provinces, which now host nearly 3 million refugees.

His comments came after forces allied with Bashar Assad warned Turkey against any advance towards their positions to the north and east of Aleppo, saying any such move would be met "decisively and with force."

Turkey will not allow sectarian conflict in Iraq

President Erdoğan underscored that a sectarian conflict is being put into play in Iraq. "Daesh killed Muslims by exploiting the Sunni interpretation of Islam. Now in Iraq, terror groups are being pushed into the field by exploiting the Shiite interpretation of Islam," Erdoğan said. The president also said that Turkey has been left out of the equation on Iraq and Syria, despite it having faced terror threats based in these countries for more than three decades.

President Erdoğan recently emphasized Turkey's new anti-terror strategy, saying that although Turkey used to follow a static position against terror and was slow to act on regional developments, its new policy will eliminate terror threats at their roots.

"We do not have an eye on any country's soil. Rather, we are against those who have eyes on these countries' soil, against those with aims of instigating new ethnic and sectarian clashes among our brothers in these countries. This is what we are trying to do. Our physical borders are different, but the borders of our hearts are not different," the president said.