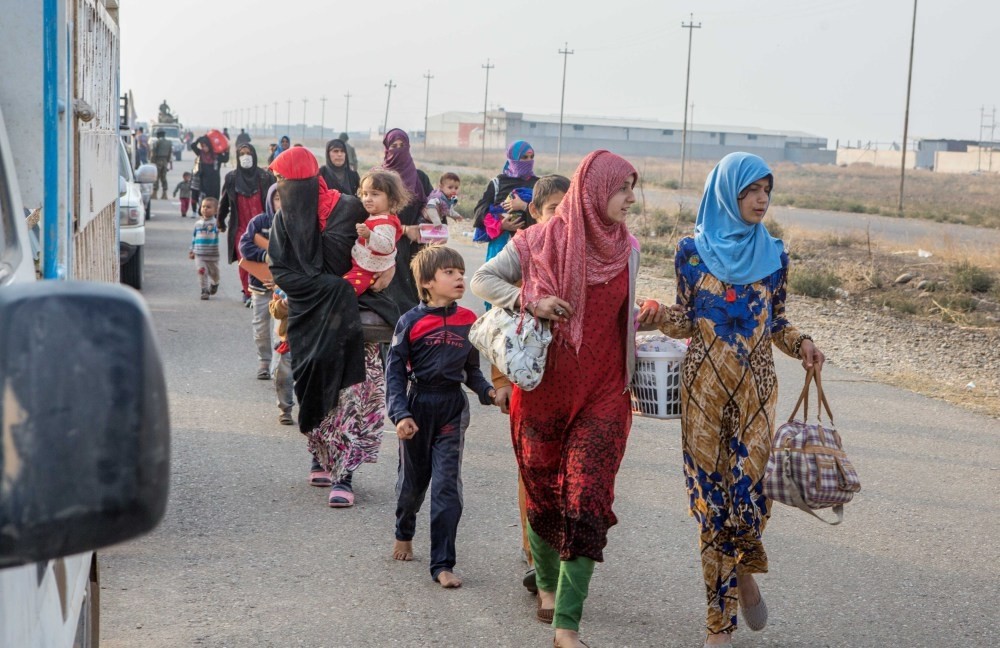 Locals fleeing village of Tob Zawa on the road between the Tarzilla and Bartilla villages of northern Mosul, Syria.
by Yunus Paksoy Oct 27, 2016 12:00 am

After the small village in northern Mosul, Tob Zawa, fell into hands of Daesh militants more than two years ago, life turned into hell for the locals after the terror organization imposed harsh, unbearable rules. Daily Sabah spoke with the people of Tob Zawa that fled their hometown, who now bittersweetly enjoy their restored freedoms

Driving on the road between the villages of Tarzilla and Bartilla north of Mosul, we suddenly stopped the car upon our curiosity to find out what an at least 2-kilometer-long convoy was doing. It turned out that hundreds of children, women and men had packed their belongings, took whatever they could carry and fled their village of Tob Zawa. Ahmad Azizah, 30, waved a pack of cigarettes at us as if it was a sign of liberty. "We have not even been allowed to smoke since Daesh seized our village. Life was miserable," Azizah remarked. 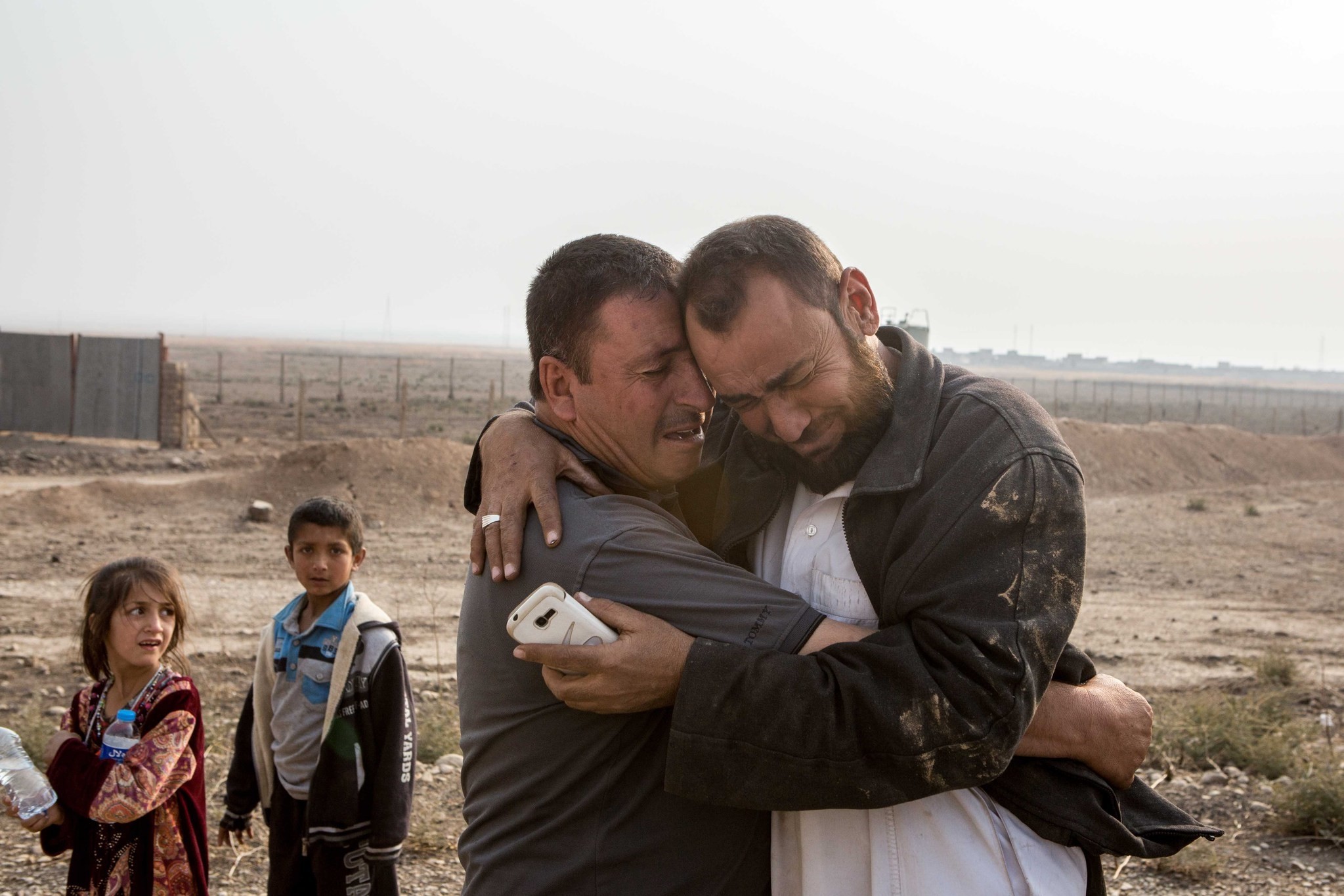 Tob Zawa, a small village north of Mosul, fell into the hands of Daesh militants more than two years ago. Similar to villages and towns in Syria and Iraq, life in Tob Zawa turned into hell for the locals after Daesh imposed harsh, unbearable rules. As we talked to the adult men of Tob Zawa in the convoy, there was hardly anybody that didn't have a long beard. Daesh did not allow men to shave, imposing a penalty of 50 lashes for those breaking the rule at first, then if the person continued to break this rule, their head was at stake. 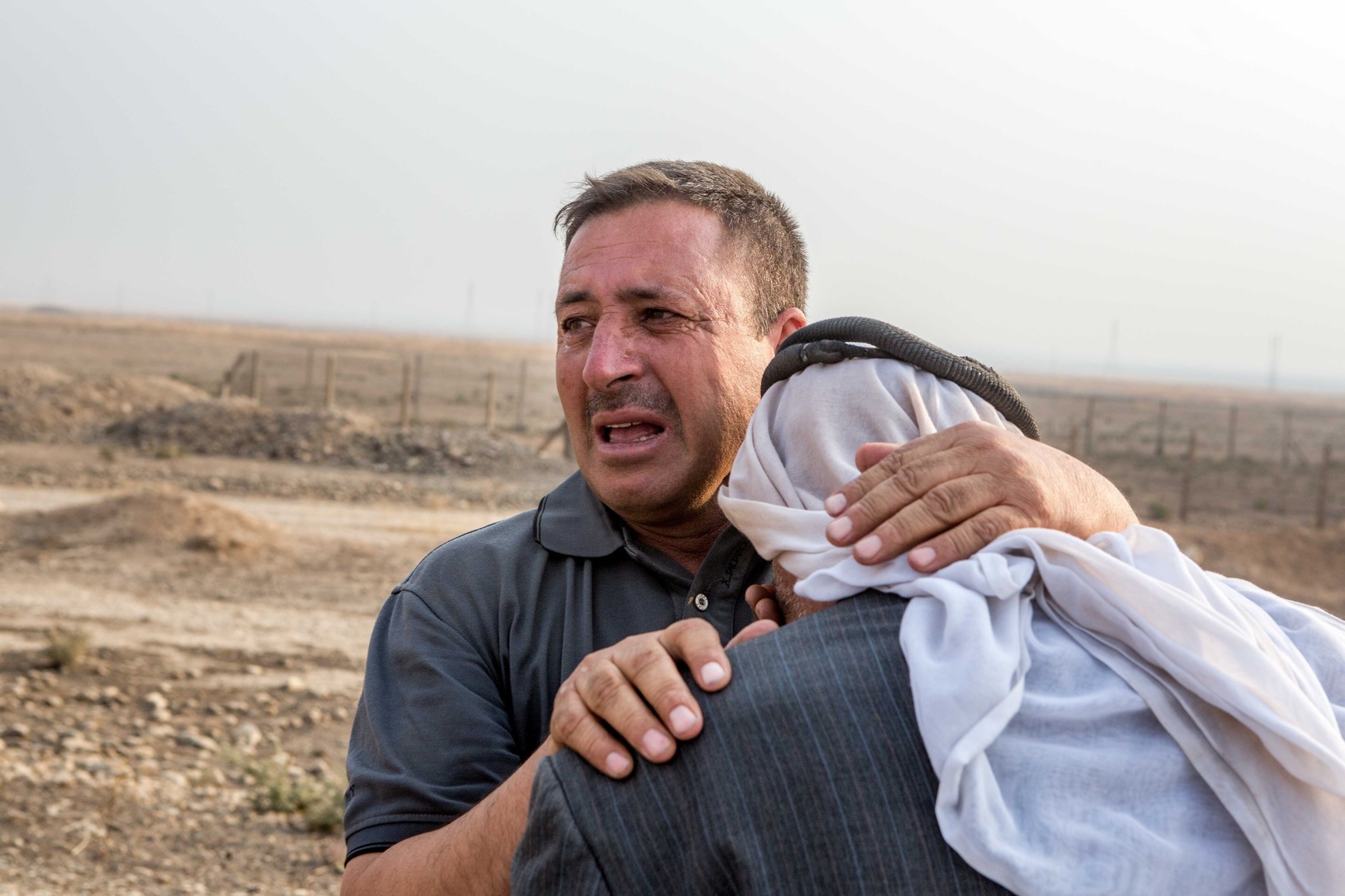 The low sound of a razor was not quite far away. We caught Abbas Hawas, 37, shaving his beard. Hawas, who has two daughters and three sons, complaining about having been stripped of his freedoms. "I did not want to grow a beard. I could not even do that. Daesh is the worst thing that I have ever encountered in my life," he cried out. 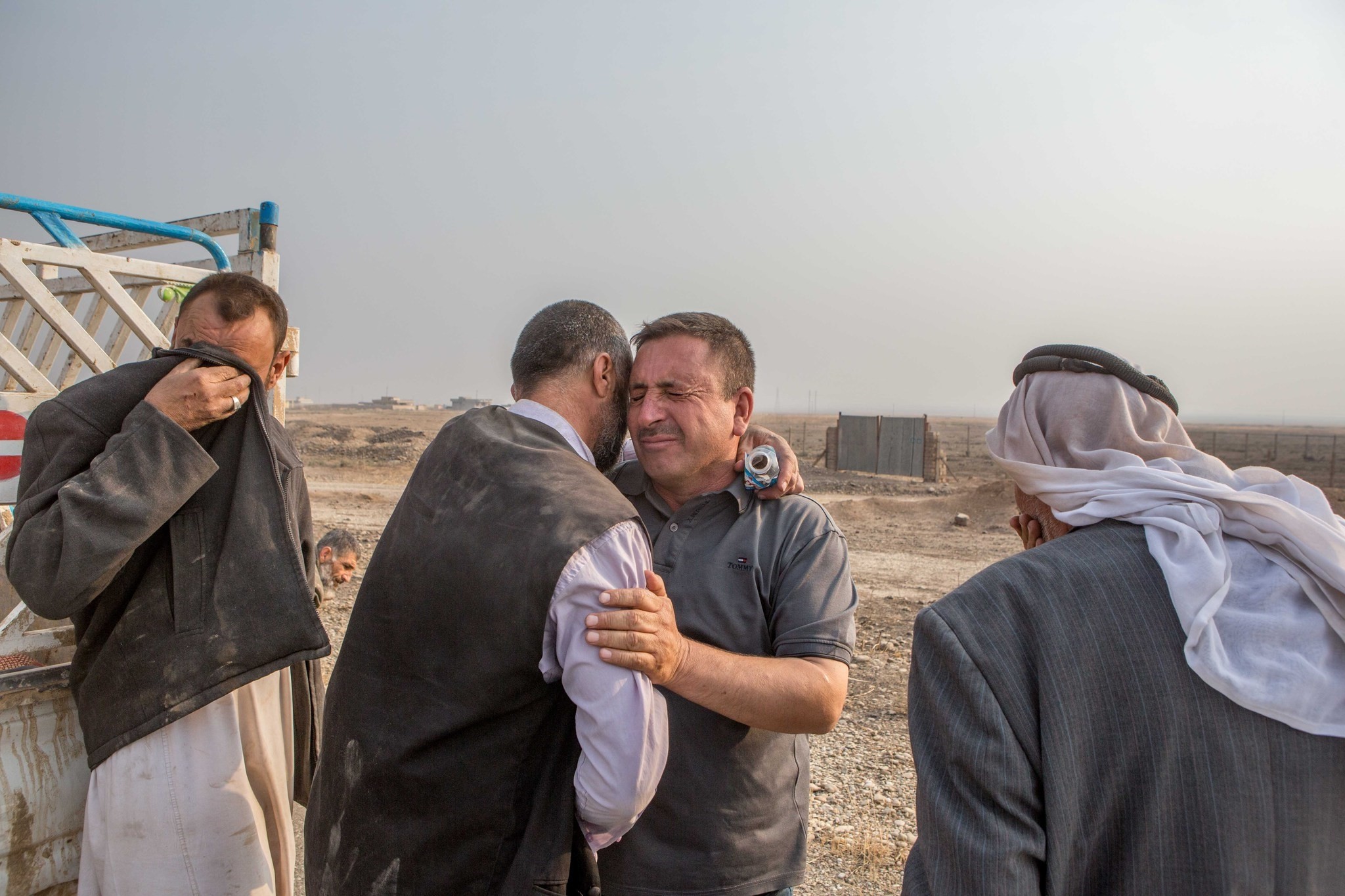 Women carried a very heavy burden under Daesh rule as well. For many, fleeing their village was the first time they had stepped outside the house for a long time. Aisha Fehm, 27, seemed shy when we approached her to ask a question. Her only words were "I am happy to be free of Daesh shackles." The shackles that Aisha mentioned were not only limited to rules that banned smoking, shaving or leaving the house. Fazillah Mustafa, 56, was audibly crying while walking down the road. She had a bold reason for that; Fazillah had to watch the execution of her son. He had been in the Iraqi police department before Daesh came. The militants labeled him an infidel, which led to his sudden execution in the main square of the village. "He did not do anything wrong. My whole world just collapsed. I begged them to have my head instead of his. They did not listen. He had three kids," Fazillah said, failing to share further. 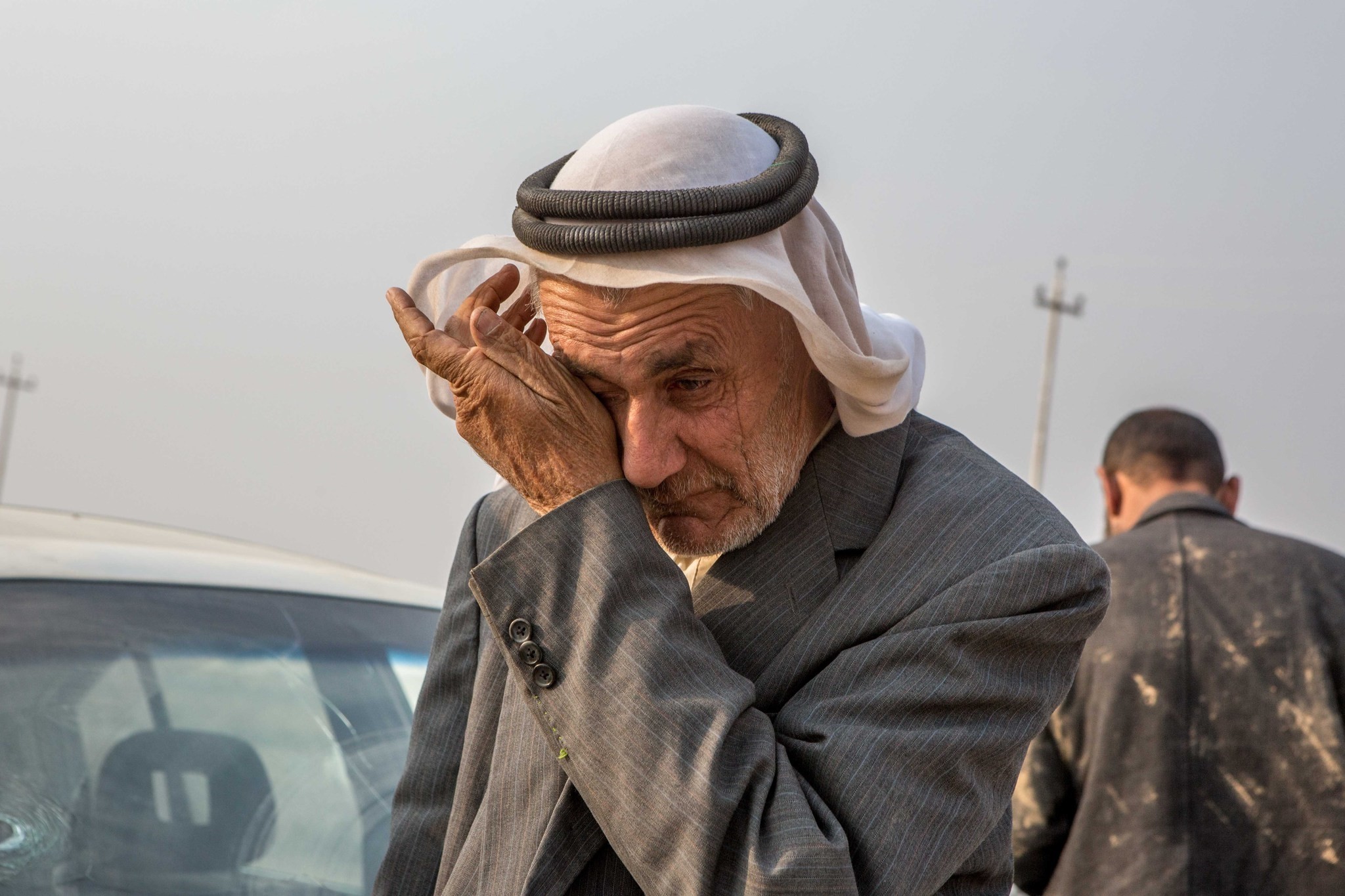 There was joy, grief and reunion on the very road that witnessed fierce clashes between peshmerga forces and Daesh militants only a week ago. Ali, 48, and his brother Muhammad burst into tears when they reunited. Despite living in neighboring villages, it had been months since they had seen each other. 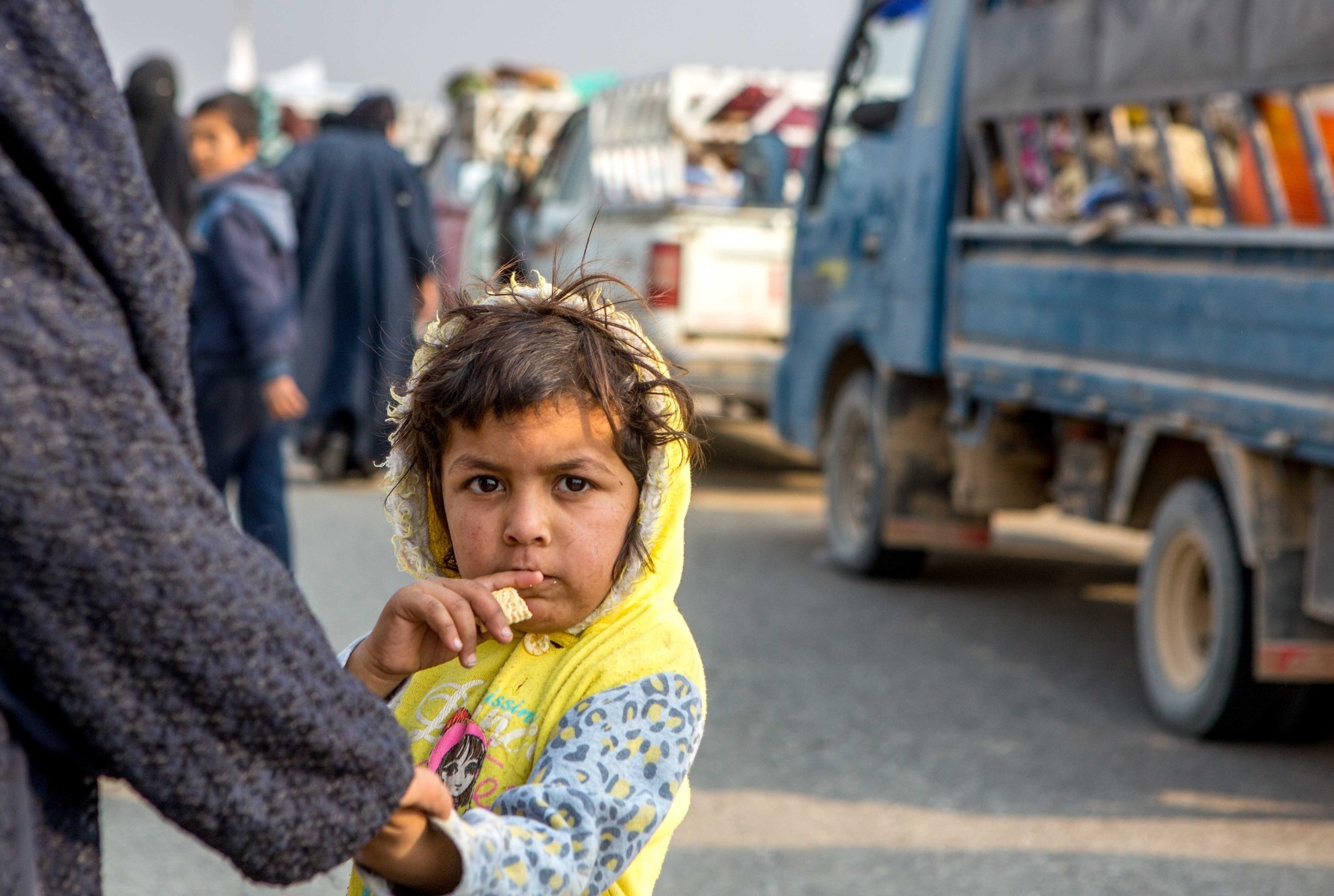 Although the people of Tob Zawa endured unbearable cruelty from Daesh, they still hope for a brighter future for themselves and their children. For dozens of babies sitting on the side of the road, there was no other world than that of Daesh. They had no idea about televisions, computers or mobile phones. 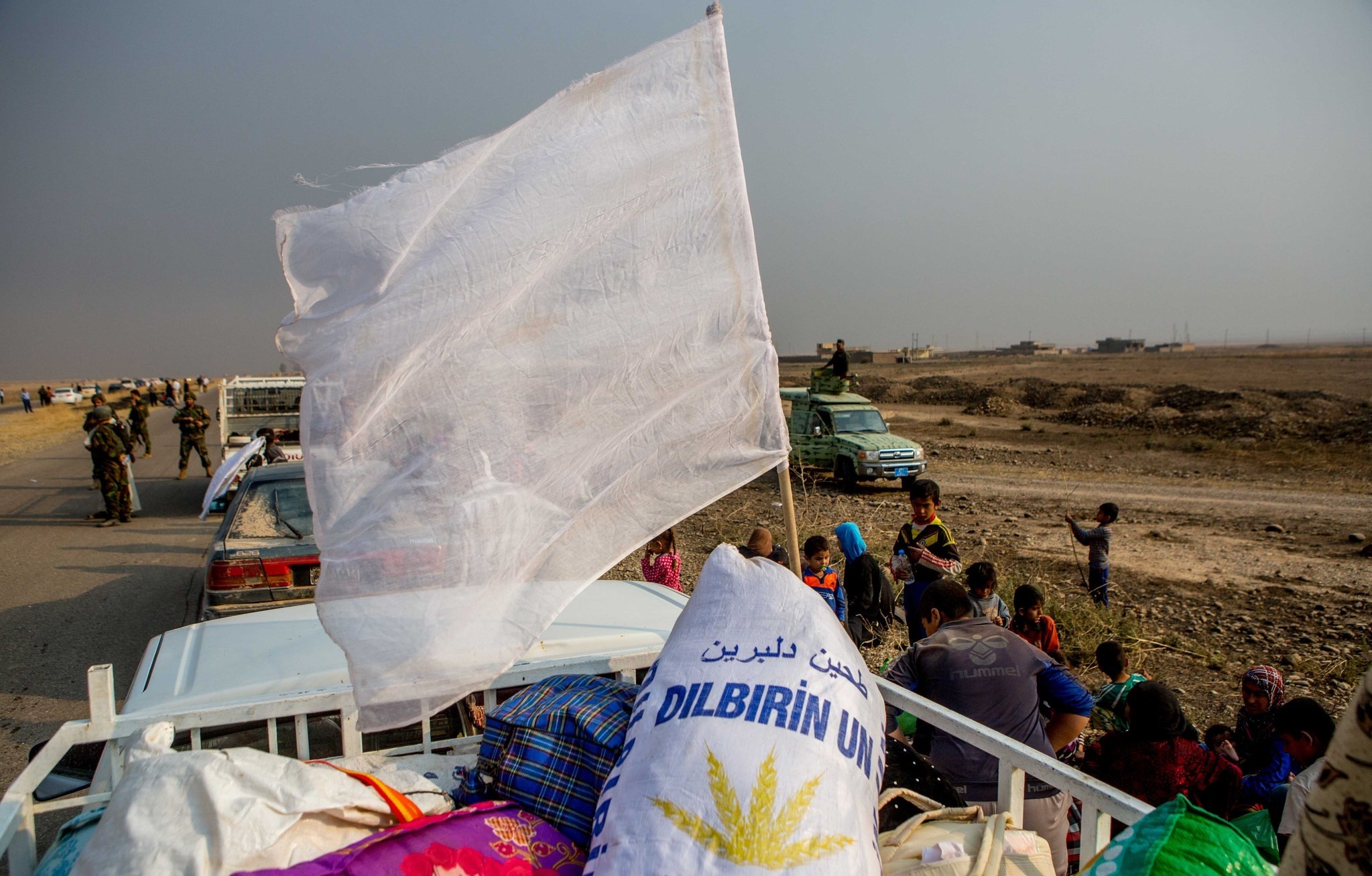 Forty-eight year-old Murat Hemo's only concern is to find a peaceful environment for his six children. There were different statements about where the people of Tob Zawa would be hosted. "I guess we are being taken to a refugee camp near Irbil," Hemo predicted. The uncertainty in his eyes reflected a bitter truth. He and his children still will not be able to feel totally safe for some time. 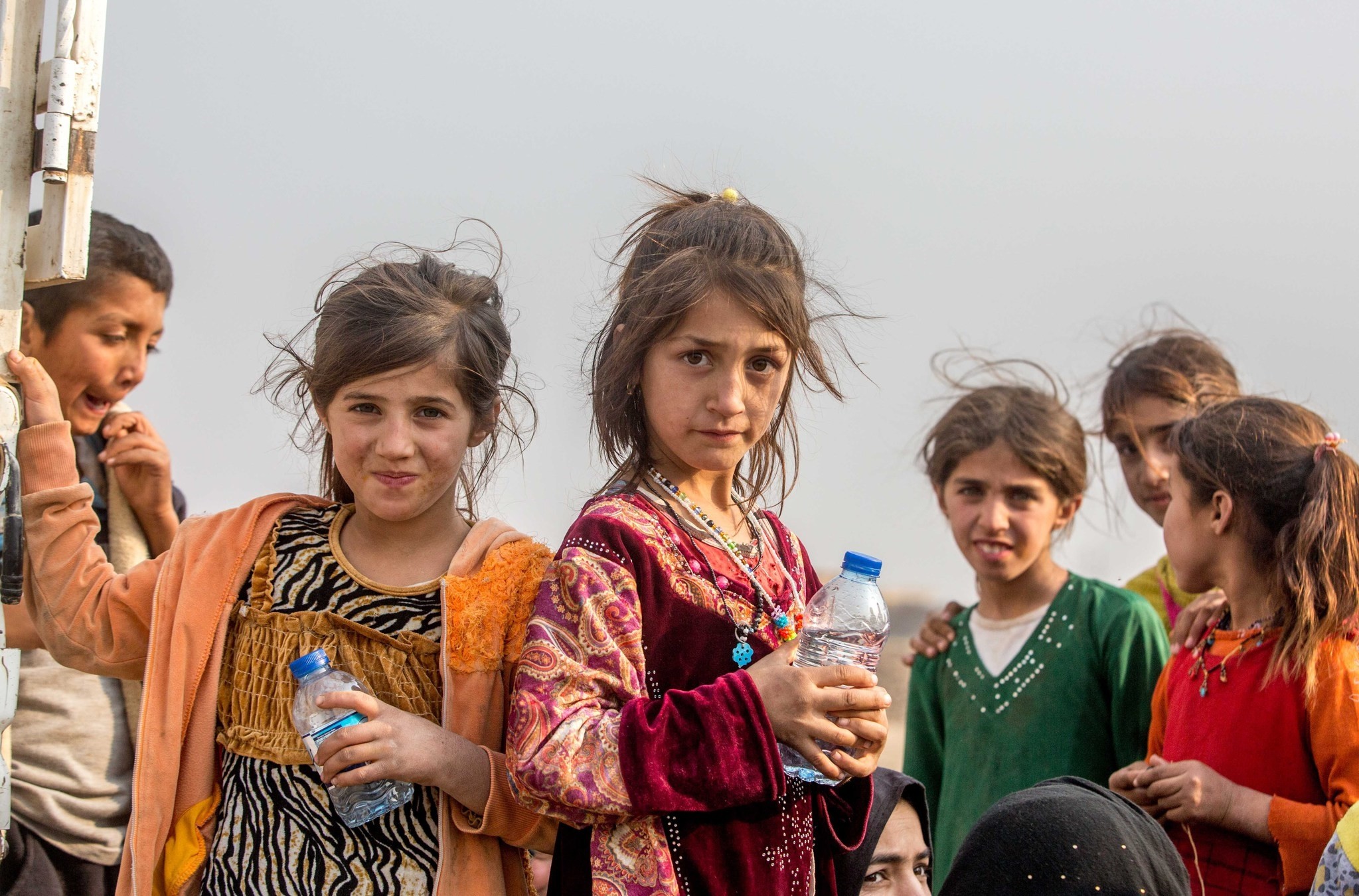 A huge refugee influx is expected once the Daesh-held city of Mosul is blockaded. Over a million people currently reside in Mosul. Experts predict that hundreds of thousands of people will seek ways to flee the city. 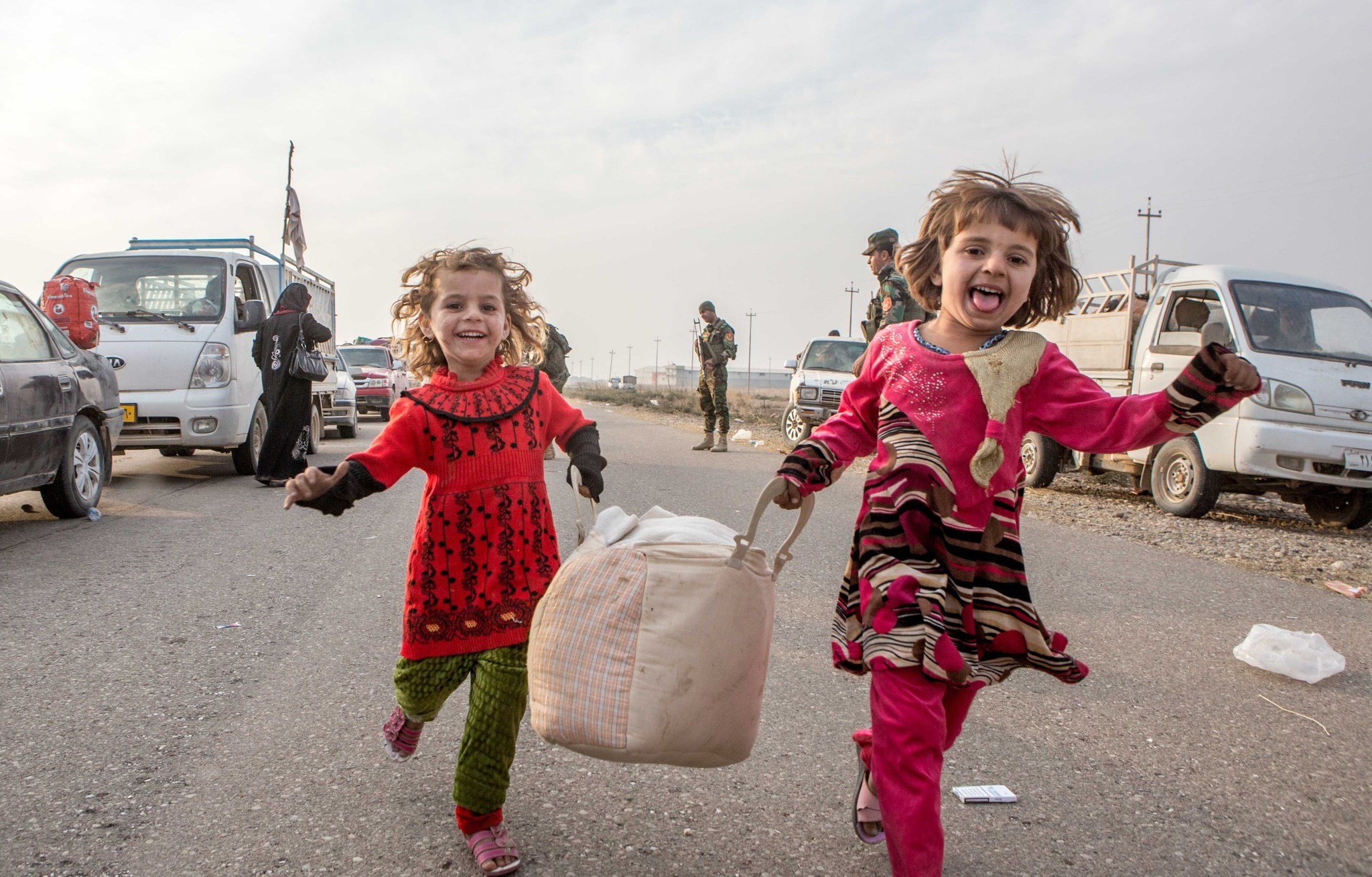 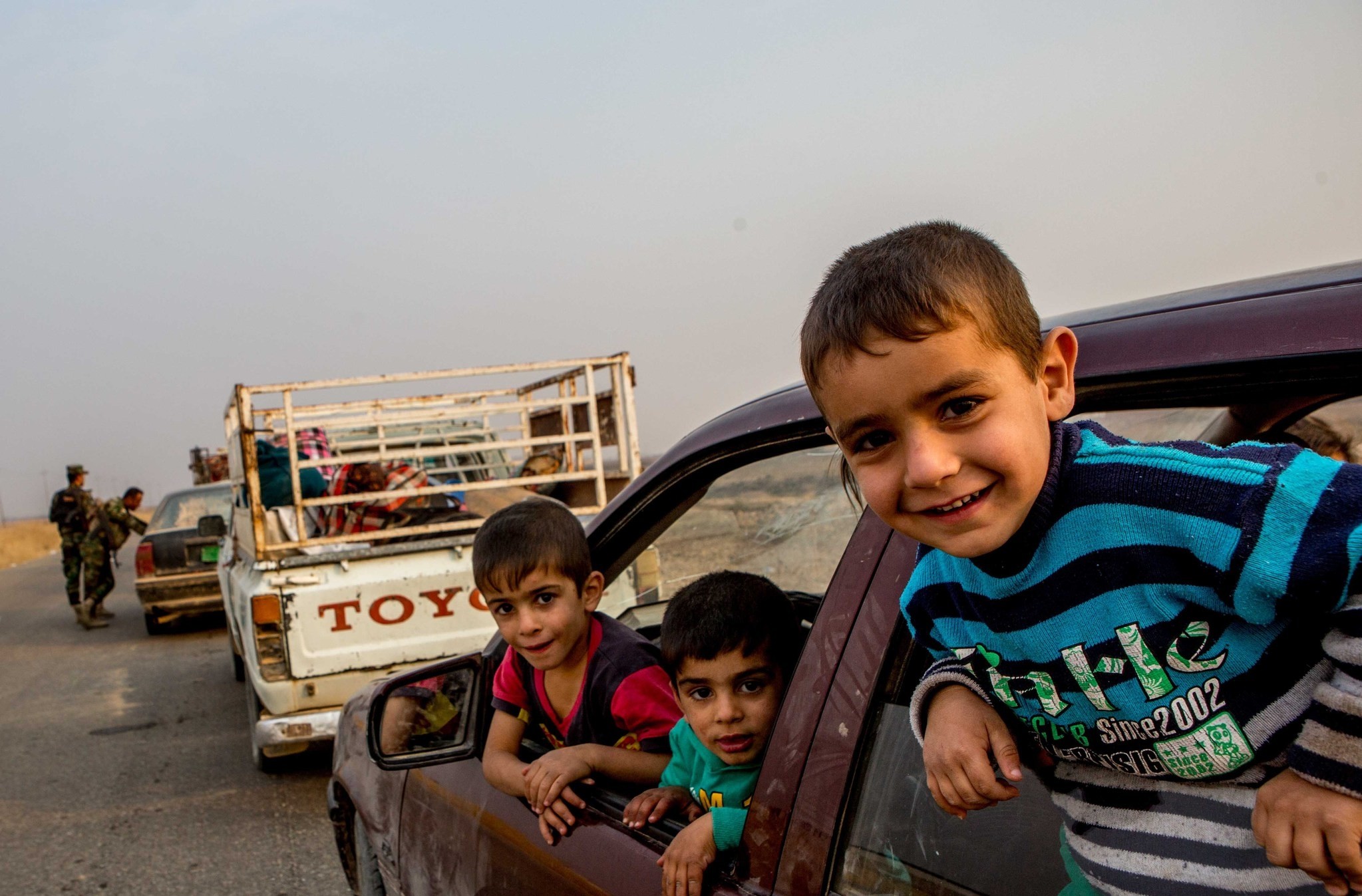 As peshmerga forces and the Iraqi army approach Mosul on multiple fronts, it is predicted that Mosul will be surrounded in a month. The inefficiencies cast doubts upon the future of civilians as a bloody war draws near.
RELATED TOPICS