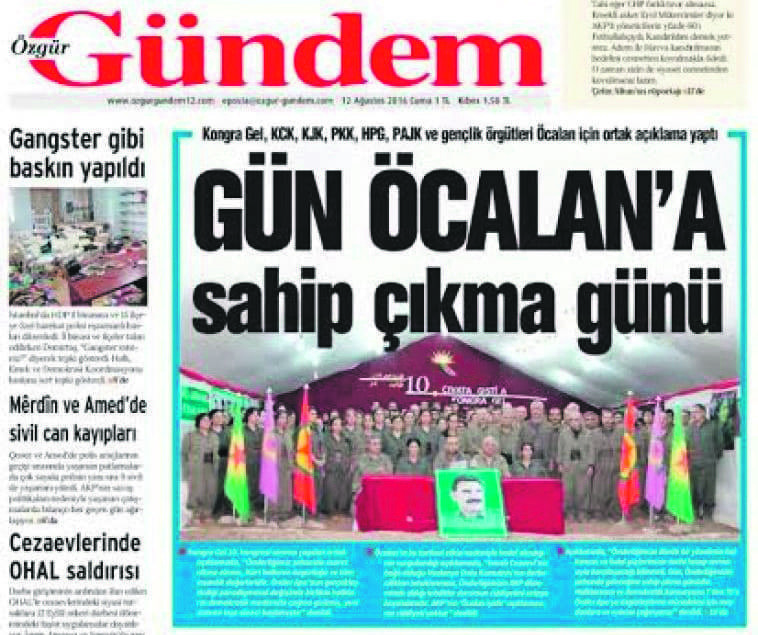 As part of the new anti-terror measures issued in a new statutory decree by the goverment, 15 media outlets were closed down for their affiliation to the PKK terrorist organization

In accordance with a statutory decree that was announced over the weekend, Ankara has shut down 15 media outlets including two of the most controversial ones, Özgür Gündem and the Dicle News Agency (DİHA), for their affiliations with the PKK terrorist group. The announcement was published in the Turkish government's official gazette and indicates that 15 purported media outlets engaged in actions that compromised the state's national security and were primarily linked to the PKK terrorist group.

News reports published by the said media outlets serve as concrete evidence that they were functioning as a political mouthpiece for the PKK – media outlets that Turkish Hürriyet daily columnist Ahmet Hakan directly referred to on Aug. 19 when he wrote, "a newspaper [Özgür Gündem] operates publicly as if it were the PKK's communicative body."Özgür Gündem's affiliation with the terrorist PKK was apparent in its controversial headlines such as a March 14 headline that read, "You cannot prevent spring from coming," referring to Ankara's counterterror operations in Turkey's southeast and directed toward the local population to rise up against Turkish security forces during Nevruz celebrations that were being held at the start of spring.The statutory decree on the PKK-affiliated media organizations included the DİHA, Özgür Gündem along with Jin News Agency, Azadiya Welat, Yüksekova News and Batman Çağdaş as well as the Cizre Post, İdil News, Güney Express, Prestij News and magazines like Evrensel Kültür and Özgürlük Dünyası.

One of the most notorious PKK affiliates is the media outlet Özgür Gündem, known for having columnists hailing from the PKK's parent organization, the Kurdish Communities Union (KCK). Back in 2015 as the November elections in Turkey approached, the KCK's Executive Council Co-Chairman Bese Hozat, also a columnist for Özgür Gündem claimed that the terrorist PKK would not conduct attacks during the elections as they were expecting a victory for the Peoples' Democratic Party (HDP).

Another senior PKK leader who also writes as a columnist for Özgür Gündem, Muzaffer Ayata, threatened Kurds who voted for the Justice and Development Party (AK Party) in the Nov. 1 elections, telling them they would have to answer for their choice of vote: "Traitors [who voted for the AK Party] probably think that they will not be brought to account and therefore continue to eat the bones thrown in front of them," Ayata said. The columnist further argued that those people will be remembered for their betrayal and damnation, adding: "These people will not forget these days and traitors."

On the other hand, Hürriyet daily columnist Hakan further questioned Özgür Gündem's affiliation with the PKK, writing: "Is being the spokesperson of a terror organization that detonates bombs, kills people and conducts genocide every day 'press freedom?'" One controversial headline from Özgür Gündem also raises questions, revealing the so-called media outlet's PKK ties in the Jan. 27 news headline that read, "Treaty of Lausanne demolished, Kurds in Geneva." The paper further referred to the Treaty of Lausanne as a Kurdish genocide, saying that with the PKK's Syrian offshoot the Democratic Union Party's (PYD) presence at the Geneva meeting that month, the Skyes-Picot and the Treaty of Lausanne were annulled, signaling a threat against the territorial integrity of the Republic of Turkey. Just two months later, on March 4, the newspaper's headline read, "Not stopping until blockade crushed," urging people to protest the military and police officers by fighting. After 10 terrorist groups in Turkey – including the PKK – declared their unification under the "Revolutionary United People's Movement" on March 13, Özgür Gündem described the unification of terrorist groups as a "Historical Uprising" in its front-page headline. Just a day after the controversial headline was published, the same newspaper threatened the Republic of Turkey with a headline that read, "You cannot prevent spring from coming" with front-page news articles commending the PKK's car-bomb attack in the capital city of Ankara which left more than 35 civilians dead. Prior to the July 15 coup attempt, Özgür Gündem on July 12 said "Retaliation Period" on its headline announcing PKK-wing KCK's retaliation against the Turkish military by aiming at primarily police stations and military posts.

Özgür Gündem's controversial headlines continued on July 25 when a headline publicly expressed support for the PKK's imprisoned leader Abdullah Öcalan, saying, "Standing uninterrupted guard for Öcalan." The article claims that supporters of PKK's Öcalan are unable to receive information on the terror leader during the state of emergency and calls on people to take to the streets for uprising once more. Finally, another headline in support of Öcalan from Aug. 12 reads, "Today is the day to support Öcalan," for an article which openly threatens Ankara and demands Öcalan's release. The DİHA is another PKK-affiliated media outlet shut down under statutory decree and the list of evidence of the so-called news agency is overwhelming. It includes a photo of children wearing Civil Defense Union (YPS) uniforms, representing the PKK's newest iteration of its youth wing wearing masks from Hakkari's Yüksekova district widely published in the media in January. Holding toy Kalashnikovs and playing a game digging in the snow to make emplacements, the photo was used in the pro-PKK Dicle News Agency (DİHA) with the headline "YPS-Zarok [Child] announcement from the children of the resistance."
Last Update: Nov 01, 2016 6:04 pm
RELATED TOPICS