Raqqa offensive within weeks, US says despite Turkey's concerns

Despite Turkey's warnings, saying that the operation to free Syria's Raqqa from Daesh should be after the Mosul offensive, the Pentagon said that the anti-Daesh coalition plans to launch operations within the upcoming weeks

"The United States and the coalition as a whole, we all feel it is important to maintain pressure on ISIL [Daesh] at this particular moment in time. While they're feeling the heat in Mosul, they're also feeling the heat in Syria, our continued support for local partners there, our air operations continue, both in Syria and Iraq," Cook said. "And I think the secretary's view is that we need to maintain pressure on them – as much pressure as possible, and that includes beginning at least isolation of Raqqah in the – in the not too distant future. And that's the view that we share with other members of the coalition," he added. 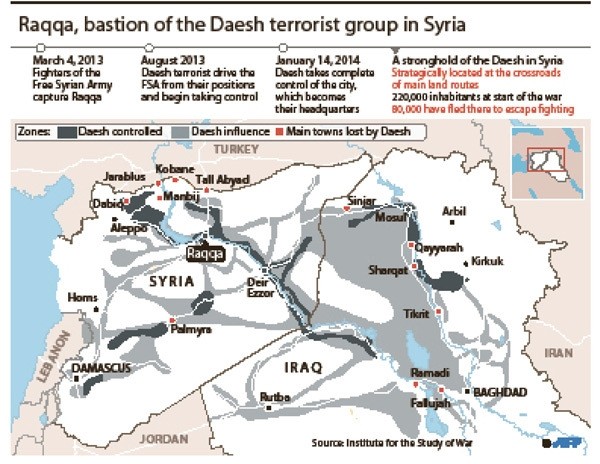 U.S. Secretary of Defense Ash Carter said recently that the U.S.'s plan to liberate Raqqa from Daesh will include supporting local forces on the ground, including People's protection Units (YPG militants), which has become a matter of dispute between Washington and Ankara. Turkey sees the YPG, the armed wing of the Democratic Union Party (PYD) as a terror threat, saying that it is the Syrian-offshoot of the PKK, which Turkey, the U.S. and the European Union recognize as a terrorist organization. The EU and the U.S., however, does not recognize the YPG/PYD as a terrorist organization. Turkey strongly opposes any PKK-affiliated group south of its border, both in Iraq and Syria, saying it constitutes a national security threat to its borders. Speaking to Daily Sabah, Yusuf Özhan, ESMEDYA digital group editor-in-chief and an expert on Middle Eastern affairs, said the U.S. administration's remarks on the possible operation in Raqqa signals that the U.S. will be sending military support to the YPG, in order to maintain its relations with the group in Syria.

"Operation Euphrates Shield has completed its first phase. The second phase will be to liberate al-Bab and then Raqqa. However, Turkey wants to participate in the Raqqa operation, once the military and logistical conditions are met," Özhan said and added that the YPG's main goal is to maintain control over al-Bab and Manbij, in order to eventually connect the YPG controlled areas in northern Syria.

"Who will the U.S. launch the operation with in Raqqa? The aim is to make a diplomatic maneuver against Turkey, which does not have a concrete physical response on the ground. The YPG does not have a desire or interest in being involved in the Raqqa operation, as much as it is concerned with al-Bab and Manbij, Such rhetoric signals that the U.S. will be sending armament support to the YPG sometime soon," Özhan also said.

The best option is for the Raqqa operation to be launched after the end of the Mosul operation in Iraq and the end of Operation Euphrates Shield in Syria, the deputy PM added. Ankara has insisted that operations against Daesh, both in Iraq and Syria, should only include local forces and moderate opposition, in addition to legitimate government forces.

He added that the anti-Daesh coalition will eventually be on the same page, similar to the plan for the Mosul operation.

Meanwhile, Kurtulmuş added that Turkey will support the Free Syrian Army (FSA) to clear Manbij from PYD terrorists, if the group does not withdraw from the Syrian city.

Ankara has been pushing southwards, supporting FSA forces as part of Operation Euphrates Shield, launched on Aug. 24, to now clear al-Bab from Daesh terrorists and form a 5,000-square-meter terror-free zone, comprising of the towns of al-Bab, al-Rai, Azaz, Jarablus and Manbij. The terror-free corridor will ensure security for Turkey's southern border with Syria, while providing a safe shelter for locals in the region, which would stop the mass influx of refugees coming into Turkey.

Both Daesh and the PKK/PYD terrorist groups have been targeted by the opposition FSA aided by Turkish tanks, artillery and aircraft since the launch of Operation Euphrates Shield.
Last Update: Nov 02, 2016 2:15 pm
RELATED TOPICS