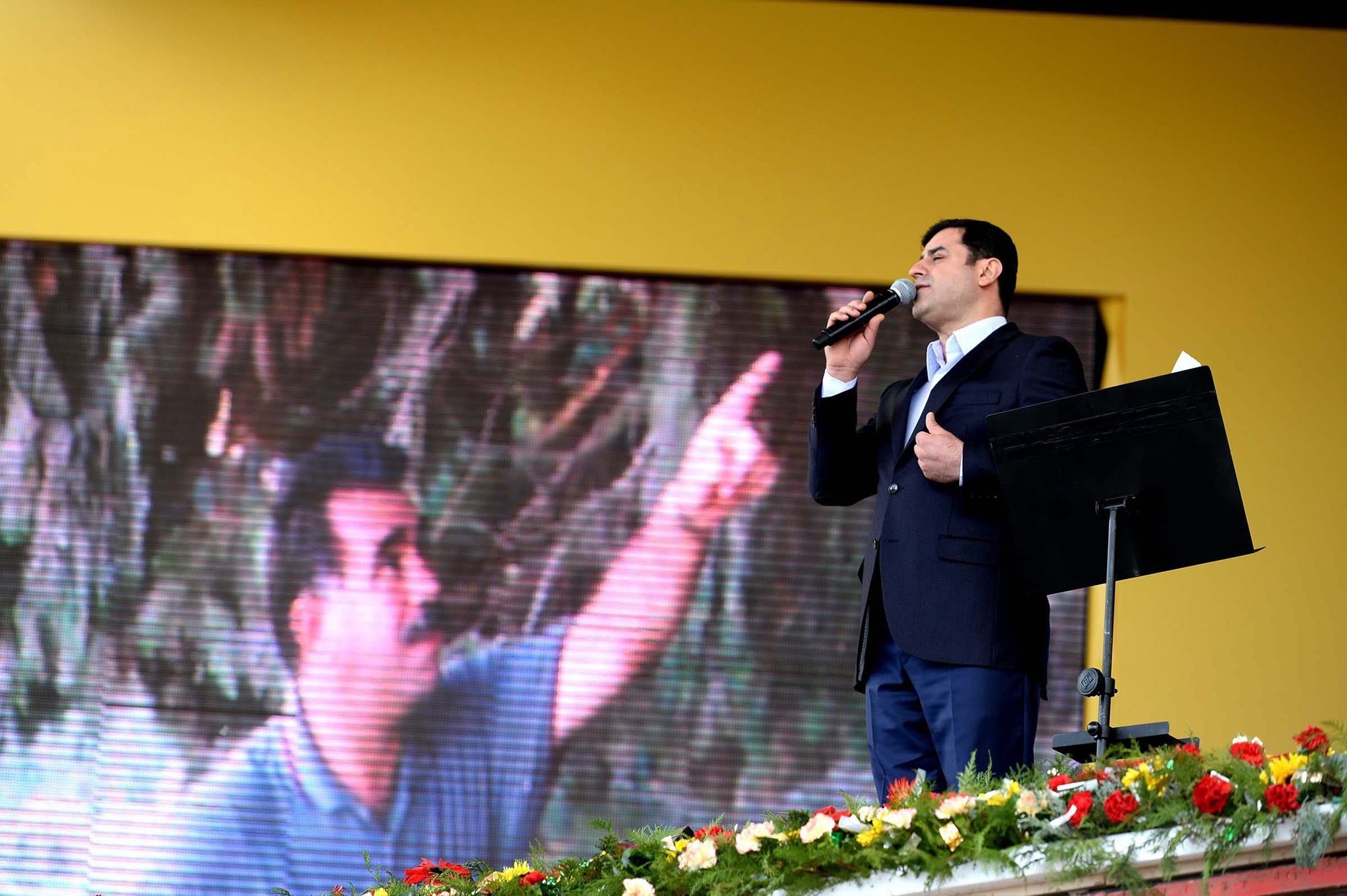 A Turkish court ordered the arrest of the co-chairs of the pro-PKK Peoples' Democratic Party (HDP) Selahattin Demirtaş and Figen Yüksekdağ and four other HDP deputies on Friday as part of the ongoing terror investigation.

Meanwhile, three of the 12 detainees, Sırrı Süreyya Önder, İmam Taşcıer and Ziya Pir, were released by the court on condition they regularly report to authorities. Şırnak Deputy Faysal Sarıyıldız and Van Deputy Tuğba Hezer Öztürk are said to be abroad.

Early on Friday, 12 HDP deputies, including Yüksekdağ and Demirtaş, were detained by Turkish security officers for refusing to bear testimony under the scope of ongoing terror probes.

Even though Nationalist Movement Party (MHP) Chairman Devlet Bahçeli and former Republican People's Party (CHP) Chairman Deniz Baykal testified on charges pressed against them, Demirtaş previously defied legal calls for him and his fellow deputies to testify months ago, asserting that the police would have to detain them to get them to do it.

The forces detained the co-chairs in southeastern Diyarbakır province and capital Ankara.

According to reports, HDP deputies failed to bear testimony after they were called by the prosecutors in Diyarbakır, Hakkari, Van, Şırnak and Bingöl provinces.

Other deputies, including the chairman of the Nationalist Movement Party (MHP) Devlet Bahçeli testified when they were called by the prosecutor over the summary of proceedings following the lifting of parliamentary immunity.

In a tweet, Demirtaş said that the police was at the door of his residence in southeastern Diyarbakır province.

"The HDP was given multiple chances to do politics in Parliament. They refused it," İlhami Işık, a renowned Kurdish writer and a columnist for the Star daily, said. Işık contended that the HDP and PKK violence had been intertwined for a long time. "Today's attack cannot be interpreted separately from the detention of HDP deputies," he added.

In addition to the detention of 12 HDP deputies, former HDP deputy and current co-chair of the Democratic Regions Party (DBP), Sabahat Tuncel, was also detained. Tuncel is also accused of being a member of a terrorist organization and spreading terror propaganda.

Demirtaş in September 2015 questioned counterterror operations against the PKK, saying, "What will you solve by bombing all provinces, just because a few youth took up arms?" He was quickly rebuffed in the media and public due to his alleged justification of youngsters carrying weapons on the streets.

Demirtaş has called for uprisings in the southeastern areas of Turkey many times. In an attempt to make Kurdish people in the region riot against the Turkish state in the face of terror operations against the PKK, Demirtaş attempted to call people to the streets. His calls have found little support.

"A political party that is so caught up in a terrorist organization and violence cannot be tolerated anywhere in the world," Işık contended, adding that there was no other way left for the Turkish state.

Yüksekdağ has also drawn heavy criticism for her alleged pro-PKK stance with her remarks for a long time. "We lean our backs on the YPJ [Women's Protection Units], YPG [People's Protection Units] and the PYD [Democratic Union Party], and we do not see any harm in mentioning and defending it," she said in July 2015. The PYD and its armed wing YPG are affiliated with the PKK. In addition, the two are reportedly commanded by PKK leaders. The capital city of Ankara was recently hit by a suicide bombing attack carried out by Abdülbaki Sömer, who fought in the YPG's ranks in Syria.

She praised the PKK and described it as "a national liberation movement and also an organization that stands for democracy and equality." A parliamentarian labeling an organization that targets security forces and civilians democratic and an advocate for equality drew ire in the public.

HDP Şırnak deputy Faysal Sarıyıldız was accused of supplying arms to the PKK in July 2015. He also in late January reportedly attempted to entrap security forces in the Cizre district of Turkey's Şırnak province, claiming that, "Thirty people have been wounded in the basement of a building and cannot reach an ambulance." The claim proved to be a hoax in the end, allegedly made up in order for security members to fall into a trap.