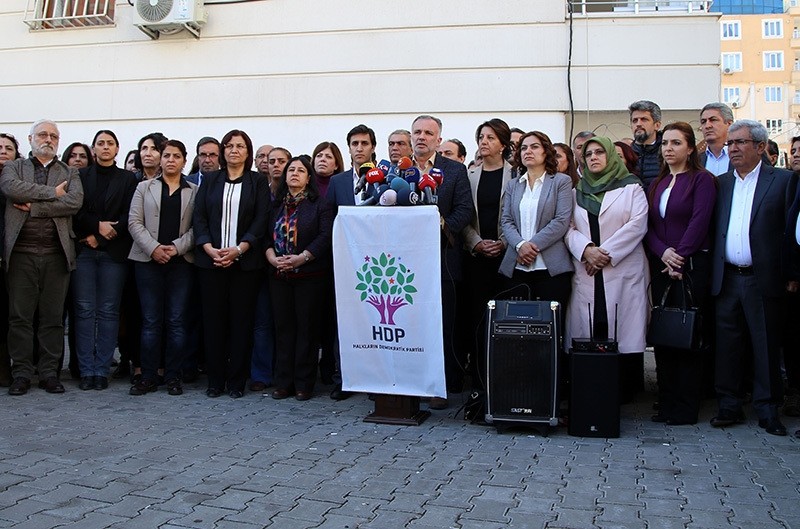 Following the arrest of its lawmakers who defied calls to testify before prosecutors in the face of terror charges, the pro-PKK People's Democratic Party (HDP) declared that it will halt legislative efforts.

Party spokesman Ayhan Bilgen declared on Sunday in a press conference in southeastern Diyarbakır province that the senior executives' meeting of HDP resulted in a decision to not participate in the general assembly and commission sessions of the Turkish Parliament.

Bilgen added that the party will not withdraw from parliament and HDP deputies will continue to hold their parliamentary group meetings, while also noting that their decision aims to gauge the possible effect of their boycott in Turkey and the world.

HDP politicians have long been accused of openly voicing their support for the PKK terror group as well as glorifying suicide bombers, inciting violence and hatred among the public and providing assistance to terrorists.

Demirtaş has called for uprisings in the southeastern areas of Turkey multiple times. In an attempt to make Kurdish people in the region riot against the Turkish state in the face of terror operations against the PKK, Demirtaş attempted to call people to the streets. His calls have found little support.

The PKK -- listed as a terrorist organization by Turkey, the U.S. and EU -- resumed its decades-old armed campaign in July last year. Since then, PKK terrorist attacks killed more than 700 security personnel and also claimed the lives of many civilians, including women and children, while nearly 8,000 PKK terrorists were killed in army operations.