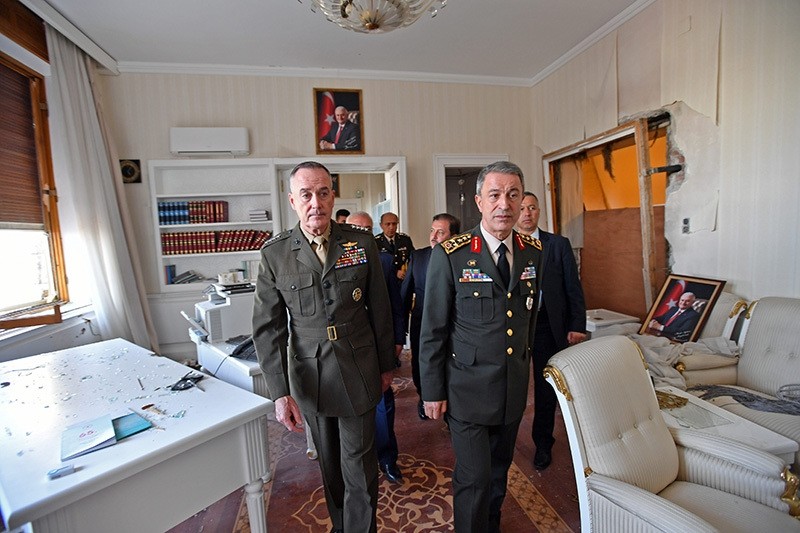 Dunford, along with his Turkish counterpart Akar, visit the damaged sections of Turkish Parliament bombed during the July 15 coup attempt, on Aug. 03 in Ankara. (AP Photo)
by daily sabah Nov 06, 2016 12:00 am

Turkish and American military chiefs met Sunday in capital Ankara to discuss the latest situation in Syria's Raqqa and operation against Daesh in Iraq's Mosul as well as the extradition process of the fugitive preacher Fetullah Gülen.

The meeting was focused on the assault launched on Sunday by the Syrian Democratic Forces (SDF), which is dominated by terrorists from PKK Syrian affiliate the Democratic Union Party's (PYD) People's Protection Units (YPG), to capture the Daesh terror group's so-called capital Raqqa in Syria, the statement released by the Turkish General Staff said.

The U.S. Chairman of the Joint Chiefs of Staff Joseph Dunford made a previously unannounced visit for talks with his Turkish counterpart Hulusi Akar.

The statement added that Akar conveyed Turkey's concerns about the terror activities carried out by the followers of Fetullah Gülen, the leader of Gülenist terror group (FETÖ) who currently resides in the U.S, to Dunford during the meeting.

PKK's Syrian wing YPG was also high on the agenda of the meeting which lasted for four and a half hours. Both chiefs of staff further exchanged views on the presence of YPG militants in Manbij, a geostrategically important city in Northern Syria that falls on the west of the Euphrates river.

Turkey is committed to free the city of YPG terrorists and prevent a possible terror corridor in the north of the war-torn country. President Recep Tayyip Erdoğan previously warned the PYD and its military wing YPG to stay on the east of the Euphrates, and reiterated Turkey's commitment to prevent the group from connecting the Afrin and Manbij pockets to form a corridor dominated by terrorists.