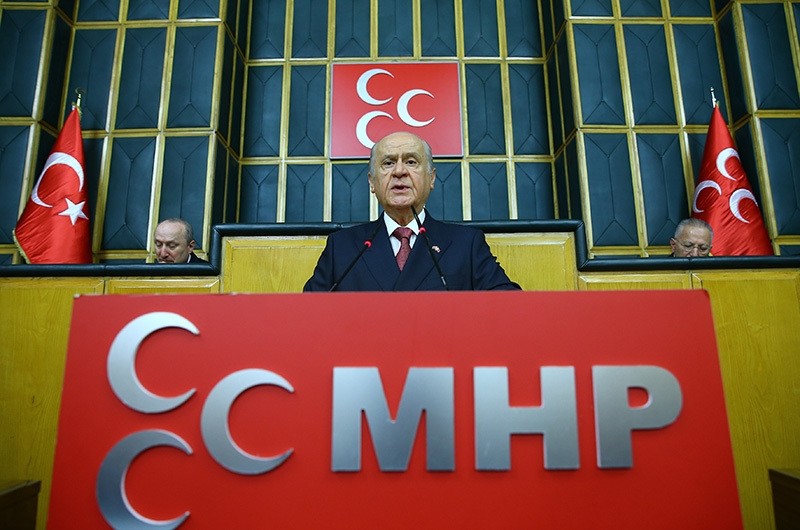 The leader of the opposition Nationalist Movement Party (MHP) has voiced support for the arrests of pro-PKK Peoples' Democratic Party (HDP) deputies.

At his party's parliamentary group meeting on Tuesday, Devlet Bahçeli made clear his party's position on the arrest of HDP deputies.

"The fundamental duty of the state is to bring people who say 'I do not recognize the law' to justice," said Bahçeli.

"Qandil's law is not valid here, but Turkey's law is," stressed Bahçeli referring to the Qandil Mountains in northeastern Iraq where the terrorist organization PKK is known to have camps and its headquarters.

"Nobody should forget […] that the betrayal to Turkey has never gone unpunished," said Bahçeli.

Since last Friday, a total of 10 HDP lawmakers, including co-chairs Selahattin Demirtaş and Figen Yüksekdağ, were remanded in custody for failing to answer public prosecutors' summons concerning an ongoing counter-terrorism probe.

"Being elected does not give the right to aid and abet in a crime," said Bahçeli adding that those who wanted to topple the constitutional order could not be forgiven.

"Considering this as an occasion of mourning by the CHP is not reciprocated in the nation's conscience," he said.

The CHP has said the arrests were "against the constitution".

Bahceli also addressed the HDP's suspension of its parliamentary activities.

"The Turkish Grand National Assembly is on duty. Nobody goes into mourning for the decision of terror's stooges," he said.

HDP, on Sunday, announced the suspension of its parliamentary activities following the arrests.

The government has accused the HDP of links to the PKK, which is listed as a terrorist organization by Turkey, the U.S., and EU.