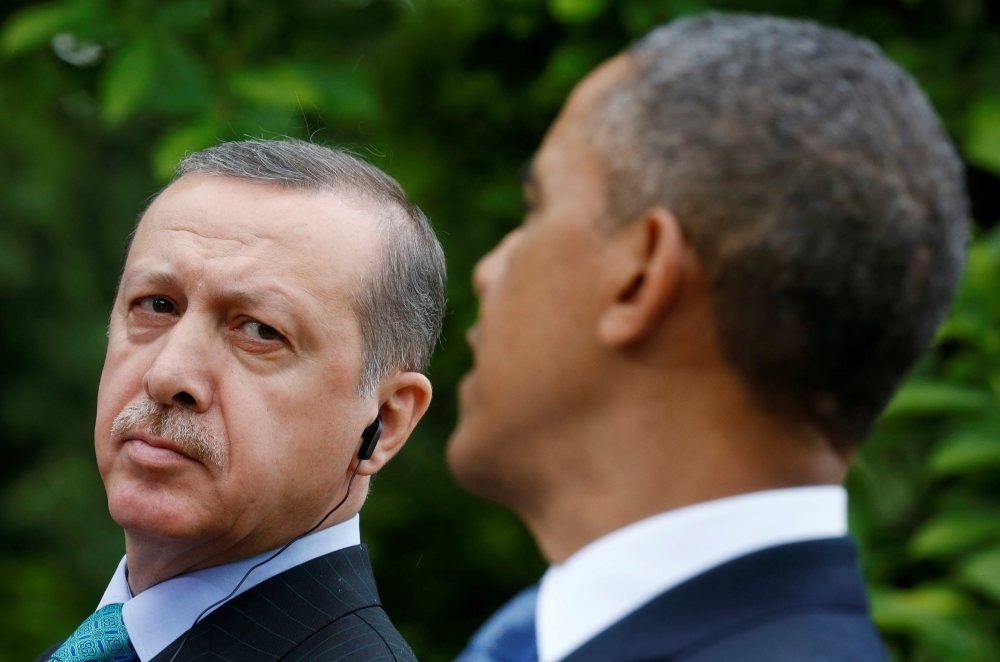 In spite of President Erdou011fanu2019s conversation with Obama, in which he offered a Turkish-U.S. operation to retake Raqqa, Washington sided with the YPG on the ground.
by Yunus Paksoy Nov 08, 2016 12:00 am

Despite Ankara's concerns and suggestions about the Raqqa Operation to liberate the city from Daesh militants, Washington sided with the PKK's Syrian wing the YPG. The terrorist group's already-worrying human rights violations sparked fears in Turkey that a sectarian war could emerge in the region

After the PKK's U.S.-backed Syrian wing the People's Protection Units (YPG) announced on Sunday that it has kicked off an offensive to retake Daesh's so-called capital Raqqa, it is feared in Turkey that the U.S.-backed operation could drag the entire region into a sectarian war. The PKK-affiliated YPG is already accused of serious human rights violations in the villages and towns it seized in Syria.

The terrorist group's plans with the U.S. to launch an offensive to retake the Daesh stronghold has drawn heavy criticism from Turkey.

Ankara has repeatedly voiced staunch concerns about its closest NATO ally Washington's collaboration with the YPG, which it considers to be a terrorist group. However, the U.S. did not seem to be interested in choosing Ankara over a terrorist group.

On Sunday, the YPG announced that it is determined to retake Raqqa from Daesh militants without a Turkish presence on the ground. The terrorist group contended that a deal with the U.S. would ensure that.

Turkey has already made its intentions known to participate in the Raqqa operation. President Recep Tayyip Erdoğan said late October that he held a phone call with U.S. President Barrack Obama about the matter.

"We don't need the PYD [Democratic Union Party] or [its armed wing] YPG terror organizations. The PYD and PKK are all the same in Raqqa," Erdoğan said, referring to his conversation with Obama. "We said 'Let's clear Daesh from Raqqa with you. We can deal with it together. We have this power'."

Ankara believes that the Turkish presence in territories retaken from Daesh could prevent human rights violations and sectarian conflicts. However, the U.S. abstained from including Ankara in the Raqqa operation, siding with the YPG.

Despite Washington's differences with Ankara over how to retake Raqqa, U.S. Chief of Staff Joseph Dunford said in a statement yesterday, following his four-hour-long meeting with on sunday Turkish Chief of General Staff Gen. Hulusi Akar, that the U.S.-led coalition will work together with Turkey to take control of Raqqa and contain and administrate it in the near future.

"The coalition and Turkey will work together on the long-term plan for seizing, holding and governing Raqqa," Dunford said.

"The U.S. wants the region to remain unstable by partnering with terrorist groups such as the YPG," Yaşar Hacısalihoğlu, rector of the Yeni Yüzyıl University and a columnist for the Akşam daily, said. Turkey is the only actor that can ensure peace and security in the post-Daesh region, Hacısalihoğlu said.

Meanwhile, Deputy Prime Minister Numan Kurtulmuş yesterday stressed that Raqqa should belong to local actors. Speaking at a press conference held following a Cabinet meeting yesterday, Kurtulmuş said: "Raqqa, Aleppo and Mosul belong to the locals who lived there and any change in the demographic structure of those cities would not contribute to regional peace. We are sensitively working on this matter as the recent military deployment to Turkey's border region was done as part of precautionary measure."

U.S. Secretary of Defense Ash Carter said recently that the U.S.'s plan to liberate Raqqa from Daesh will include supporting local forces on the ground. Even though Washington contends that only local forces will be on the ground, around 30,000 YPG fighters are expected to take part in the operation.

Even though the U.S. opted to side with the YPG on the ground, not the moderate opposition that Ankara works with, Dunford said, "a predominantly Arab and Sunni Arab force" is needed in the Raqqa operation.

Hacısalihoğlu drew attention to the "necessity of keeping local sources where they live," after Daesh has been swept out. "We saw a great example in Jarablus. After Daesh was cleared from the town by the Turkey-backed FSA, locals returned to normal life," he stressed.

Kurtulmuş drew attention to the grave danger of Raqqa being invaded by non-local actors. "Raqqa, a complete Arab-populated city, being seized and administrated by non-Arab groups would not contribute to regional peace. Similarly, Tal Afar and/or Sinjar being seized or controlled by the Hashd al-Shaabi would also not contribute to peace in any way, rather it would further escalate the conflicts." Kurtulmuş added that all of Turkey's concerns regarding these matters were conveyed to U.S. officials as well as Iraqi officials.

Yesterday, local activists and opposition in Raqqa reportedly issued a written statement via social media, saying that YPG forces will not be welcome in the city should they prevail against Daesh.

Commenting on the withdrawal of the PKK-affiliated YPG/PYD groups from Manbij, Kurtulmuş reiterated Turkey's determination on the matter as he said "our determination regarding Manbij was once more clearly conveyed to the U.S. Chief of General Staff [Joseph Dunford] during his visit to Turkey yesterday and urged the PYD's complete and immediate withdrawal from Manbij as part of our agreement… Turkey has reminded [Dunford] of its insistence regarding the al-Bab operation. We have provided information to our counterparts regarding the matter in efforts to prevent any other developments there [the al- Bab region]."*Merve Aydoğan contributed to this report from Ankara
RELATED TOPICS