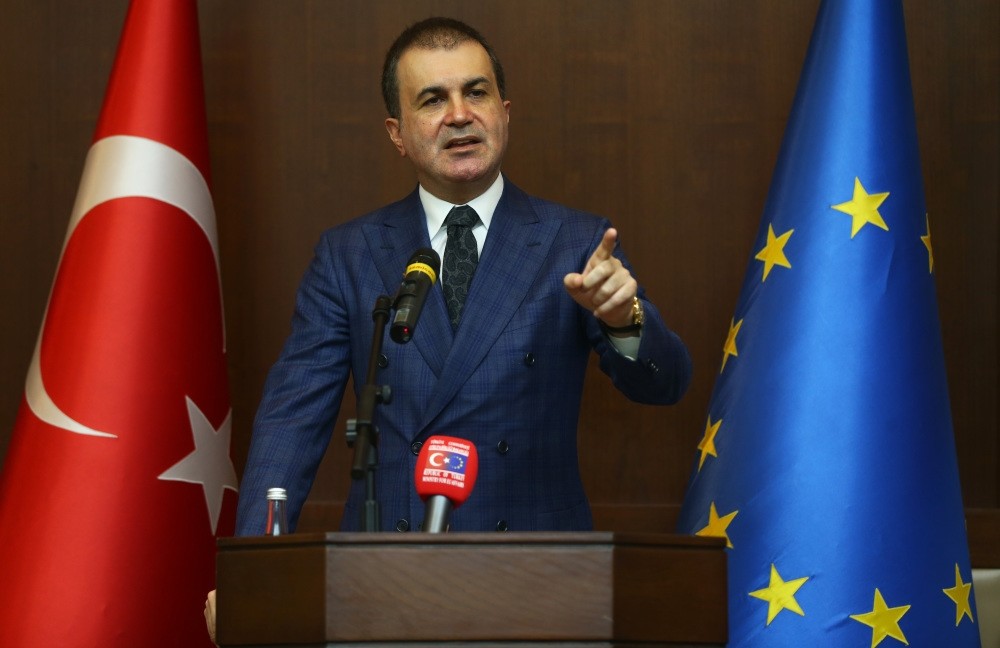 Ankara denounced double standards within EU institutions over the PKK, which is recognized as a terrorist organization by the member states, saying the EU fails to stand against PKK terror activities targeting Turkey and its people

Recent remarks by European Union politicians against Ankara's new anti-terror strategy and Turkey's firm stance against PKK terrorism has faced harsh criticism from Turkish politicians, saying the EU fails to stand against the terrorist group's activities targeting the state and its people, both in Turkey and within EU borders. Turkey's EU Minister Ömer Çelik is voicing criticism for what he calls the "double standards" of EU institutions applied to the PKK terrorist organization, urging the EU to rectify its stance in terms of principles and revise its mindset. EU Minister Çelik stressed that the recent decision of a Belgian court violates the European Convention on Human Rights (ECHR).

In a controversial decision made last week, a Belgian court ruled that the recruitment activities of PKK members in Belgium were within the scope of an "armed struggle" and were not terror crimes, even though the PKK is officially recognized as a terrorist organization by the EU, U.S. and Turkey. At a press conference held on Monday, Çelik slammed the double standards EU institutions apply to the PKK, arguing that, "The recent decision of the Belgian court does not align with the purported statements of the EU with regard to the terrorist organization; contrarily, this ruling defies the ECHR and equalizes the terrorist organization with legitimate states, violating the principles of the U.N. and every international convention we have ever signed," Çelik said.

Despite being on the EU's official terrorist organizations list, the PKK's presence in Europe has been met with indifference in those countries, resulting in an anomaly widely criticized by Ankara, who argues that the anti-terrorist rhetoric used by EU leaders directly contradicts the enabling of PKK activities in EU-member countries.

EU Minister Çelik invited EU envoys to Ankara on Monday morning and exchanged his views with 28 EU-member countries. Regarding their meeting, Minister Çelik criticized the EU envoys who gathered in an emergency assembly on Friday to discuss the detention of Peoples' Democratic Party (HDP) deputies.

''EU ambassadors should have gathered in an emergency assembly to express their solidarity with Turkey after the terror attacks that we have suffered,'' Çelik underscored.

Stressing that Turkey is not the first country to lift immunity of parliamentarians and noting that 24 such cases were reported in EU countries between 2004 and 2009, Minister Çelik said that none of the EU countries represent the liberty of the people if they support terrorism. ''As the Justice and Development Party [AK Party] we oppose the eradication of political parties and we fully believe in freedom of expression but we will not accept criticism for the detention of these parliamentarians who showed support for terrorism and refused to testify in ongoing terrorist investigations," he said.

Criticizing the pro-PKK HDP's decision to boycott legislative efforts in Turkish parliament following the detention of HDP deputies, Minister Çelik stressed that parliament is the only place where political solutions can be reached.

"Deputies who leave parliament are actually betraying the people they represent in the name of the PKK," Çelik said. "Calling people for sedition and considering the digging of ditches to be a political gain should never be accepted as normal or legitimate," he noted.

Luxembourg Foreign Minister Jean Asselborn told Germany's DeutschlandFunk Radio on Monday that Turkish authorities are using methods reminiscent of the Nazis in the crackdown following the July 15 failed coup attempt. Addressing the foreign minister's remarks, Minister Çelik said that Asselborn lacked knowledge of history, and that Ankara's actions should be equated with efforts to "protect democracy while fighting against the Nazis."

"The Nazis seem like apprentices when compared with the Gülenist Terror Group," Çelik said.

''We are talking about an organization that has massacred its own people, using warplanes, tanks, warships and helicopters. Why would anyone think that we will take a step back in our fight against them," he added.

Meanwhile, Ankara also rejected criticism against the detention of HDP deputies after the government's Cabinet meeting in Ankara yesterday, saying the process has been followed per the requirements of the legal procedures and laws.

Deputy Prime Minister Kurtulmuş said in a press conference after the Cabinet meeting that the detentions were made as a result of HDP deputies failure to follow the law, requiring them to testify "following the amendment made to the Constitution allowing lifting of parliamentary immunities," and added that the criticisms were against the decision made by Parliament.

"A legal procedure had begun against all deputies that have a file or summary of proceeding regarding them until that moment in Parliament. Thus, the MHP chairman personally went to give testimony, the CHP chairman had sent his lawyer to give testimony on his behalf along with other party deputies personally who went and gave their testimonies to the prosecutor. However due to HDP members refraining from giving testimony, such legal procedure had begun. Indicating that this procedure is against the Constitution is completely disrespecting the Parliament's will as this is a constitutional process," he said.

The deputy prime minister added that if the steps were not taken, it would be against constitutional amendments.

"Relevant courts have done those necessities. We would not know what the final decision would be as it is not a matter of politics for us. There is nothing political with the matter. The detention process, arrest process and the processes following thereafter are 100 percent legal. Thus, we urge everyone to respect this judicial process," Kurtulmuş said.

* Merve Aydoğan contributed to this report from Ankara
RELATED TOPICS