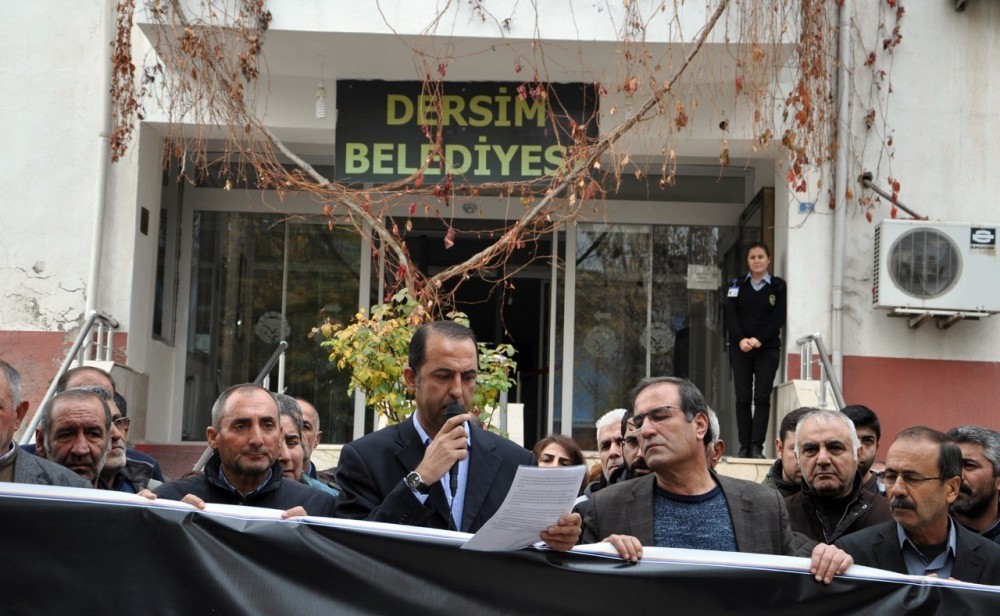 Pro-PKK DBPu2019s Tunceli co-chair Mehmet Ali Bul (C)
by Daily Sabah with AA Nov 16, 2016 12:00 am
Law enforcers on Wednesday detained the mayor of Tunceli and arrested the mayor of Siirt as part of a terror probe, confirmed a police source.

According to the source, who spoke on condition of anonymity, said the arrest of Siirt Mayor Tuncer Bakırhan, a member of the Democratic Regions Party (DBP) – a fraternal party of the opposition Peoples' Democratic Party (HDP) – came after the Siirt public prosecutor's office issued a warrant as part of an investigation into the PKK terrorist group.

In addition, the co-mayors of Tunceli, Mehmet Ali Bul and Nurhayat Altun have also been detained in Tunceli as part of the Tunceli Public Prosecutor's Office's terror investigation.

In late October, Diyarbakır Mayor Gültan Kışanak, a member of the pro-PKK Peace and Democracy Party (BDP) and her co-mayor and a city council member, Fırat Anlı, were remanded in custody as part of the investigation.

The Chief Prosecutor's Office in Diyarbakır had said Kışanak was arrested for being a member of an armed terrorist group.

In September, an official report by the Justice Ministry revealed at full length the involvement of the Democratic Regions Party (DBP) municipalities in various crimes. The DBP is the regional affiliate of the HDP.

Vehicles belonging to many DBP municipalities, including those in Diyarbakır, were used to carry and bury deceased terrorist members of the PKK, the PKK's Syrian offshoot the Democratic Union Party (PYD) and its armed wing the People's Protection Units (YPG).

The PKK, listed as a terrorist organization by Turkey, the U.S. and EU, resumed its decades-old armed campaign in July 2015.

Since then, PKK terrorists have killed nearly 800 members of security forces and claimed the lives of over 310 civilians, including women and children, while more than 10,000 PKK terrorists have been killed or apprehended in army operations.
Last Update: Nov 16, 2016 9:17 pm
RELATED TOPICS