YPG advances west of Euphrates towards al-Bab despite US pledges 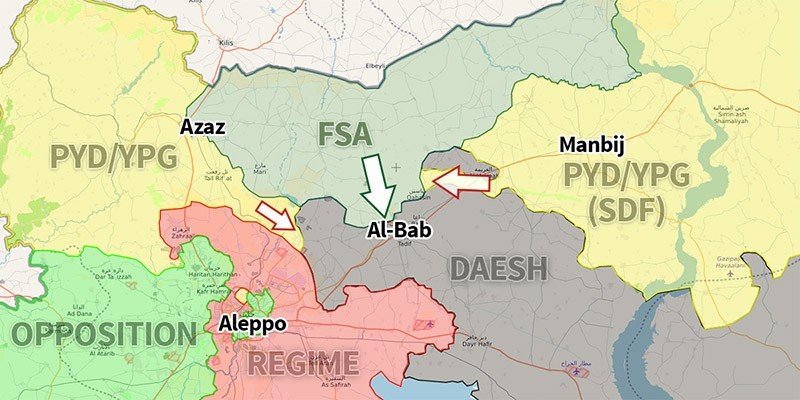 Despite U.S. pledges that YPG, the military branch of the PYD which is the Syrian offshoot of PKK, is leaving Manbij and the territories west of the Euphrates River, the terrorist group is still advancing towards the northern Syrian town of al-Bab, a key point to link its cantons against Turkey's warnings.

PYD forces moved westwards from Manbij area and occupied eight villages on Wednesday, cutting off the Daesh-held village of Arimah from the rest of Daesh-occupied areas.

The U.S. military had said earlier on Wednesday that the YPG/PYD elements in the northern Syrian town of Manbij have begun to withdraw.

Tensions between Turkey and the U.S. have persisted for months regarding when all of the elements affiliated with the PKK terror group would leave Manbij, which is located on the western banks of the Euphrates River, and cross back to the eastern banks after they help local Arab forces liberate the town from Daesh. The Pentagon had previously said the fighters had left the city.

Despite Ankara's insistence that the U.S. keep its promise to leave the predominantly Arab town to locals, President Barack Obama's special envoy supervising the counter-Daesh fight, Brett McGurk, tweeted on Wednesday that YPG fighters will leave after the training of local forces is complete. But while speaking to Pentagon reporters via videoconference from Baghdad, anti-Daesh coalition spokesman, Col. John Dorrian, caused additional confusion by saying YPG elements have just started to move out of the town.

However, it later appeared that YPG terrorists, far from withdrawing, were resuming their advances west of the Euphrates at the same time as U.S. officials were pledging their removal, and took control of eight more villages from Daesh terrorists.

In the case of the YPG occupying al-Bab, they would create a corridor linking the areas they occupy in northwestern Syria, known as the Afrin region, with the territories they hold in northeastern Syria.

Turkish President Recep Tayyip Erdoğan has already said on several occasions that YPG and PYD are affiliates of the PKK terrorist group, which has been engaged in a fight against the Turkish state for the last 40 years, and that the occupation of al-Bab by the terror group is a red line for Turkey.

Earlier in September, U.S. officials had also said that YPG terrorists were withdrawing from the west bank of the Euphrates River while Turkish intelligence reported that this removal never happened.

The U.S. considers the YPG-dominated Syrian Democratic Forces (SDF), which is currently active in Manbij and north of Daesh's Syrian bastion Raqqa, as its best partner on the ground in Syria.