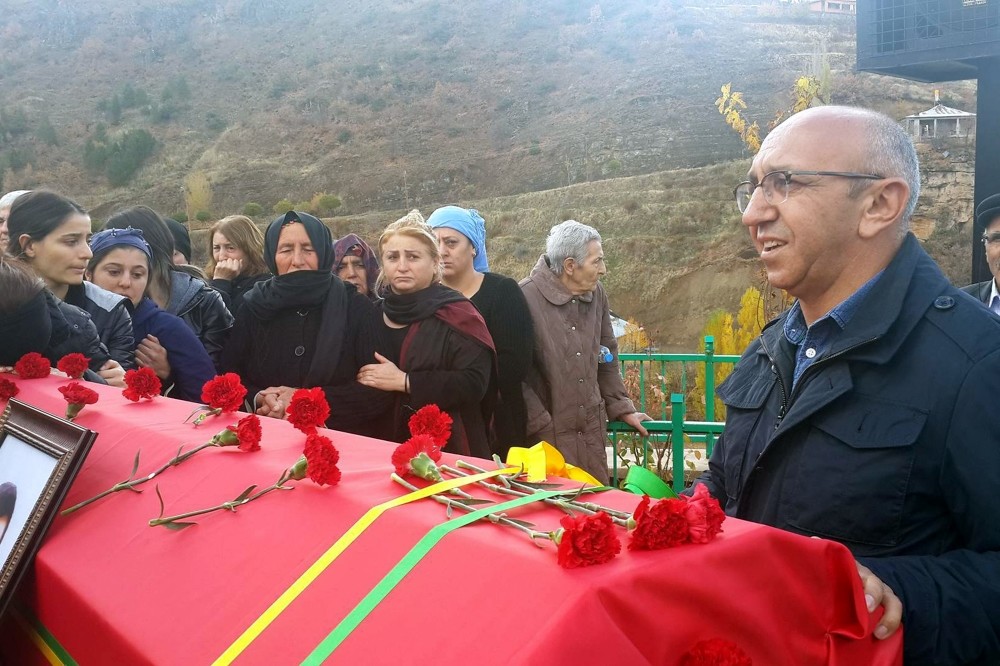 Alican u00d6nlu00fc (R) attended the funeral and burial of a PKK militant.
by Daily Sabah with AA Nov 18, 2016 12:00 am
In the latest example of his party's support for the terrorist group the PKK, Alican Önlü, a lawmaker from the Peoples' Democratic Party (HDP), attended the funeral of a militant killed in anti-terror operations.

Önlü, a lawmaker from eastern province of Tunceli, was among the crowd bidding farewell to Celal Oduncu, one of 14 terrorists killed in air strikes targeting the PKK on Nov. 8 in the province.

Several lawmakers from the HDP already face investigation over spreading propaganda for a terrorist group for their attendance to the funeral of PKK members in October. Ziya Pir, Feleknas Uca and Sibel Yiğitalp attended the funeral of four terrorists killed in anti-terror operations in Diyarbakır last month.

The HDP's leaders are currently in prison for refusing to testify in a case against the party's links to the terrorist group responsible for hundreds of deaths in a terror campaign. The HDP often claims they do not support the terrorist group although its members have close ties to the group. Its leaders also praise the group as "a liberation movement." The PKK claims the fighting for Kurdish self-rule in southeastern Turkey.

The PKK is listed as a terrorist organization by Turkey, the U.S. and the EU and resumed its 30-year-old campaign of terrorism against Turkey in July 2015, after breaking a unilateral truce with Ankara that had been in force for roughly two years. Since then, PKK terrorist attacks have killed more than 600 security personnel and claimed the lives of many civilians, including women and children, while more than 7,000 PKK terrorists have been killed in army operations since it began.
RELATED TOPICS