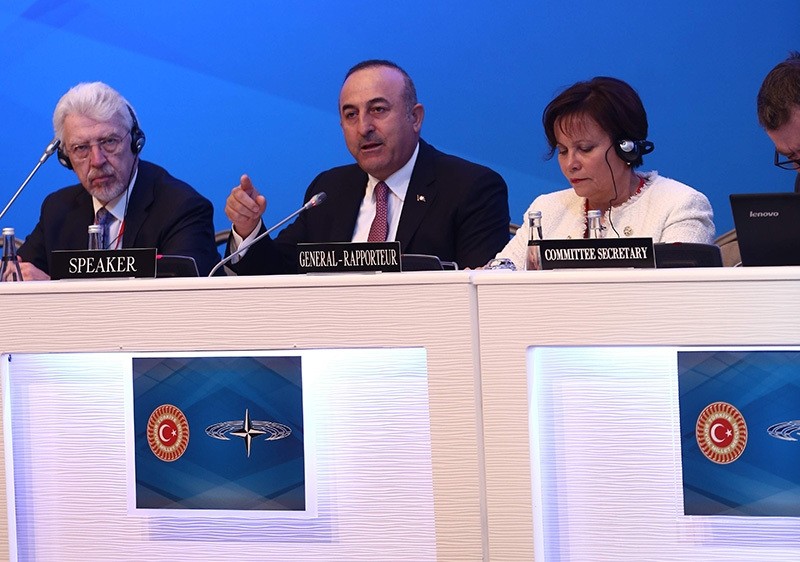 Foreign Minister Mevlüt Çavuşoğlu dismissed claims by the head of the Armenian delegation to NATO Parliamentary Assembly on Saturday and urged him to be honest regarding Turkey's fight against Daesh terrorists.

Attending the Parliamentary Assembly of NATO meeting in Istanbul, Çavuşoğlu responded to Koryun Nahapetyan's claims accusing Turkey of actively supporting the terrorist group by saying that they have no basis and that Turkey is one of the most active participants in the fight against Daesh.

"How can you claim that we support Daesh?" Çavuşoğlu said and continued by adding that Turkey is currently waging the most active fight against the terrorists and is the most effective when it comes to destroying the group's ideology.

"In Bashiqa alone we killed over Daesh 700 terrorists" Çavuşoğlu noted and urged Nahapetyan to be honest and show evidence of such claims.

The foreign minister also said that Turkey is one of the main targets of Daesh terrorists, and President Recep Tayyip Erdoğan, as well as his supporters, including Çavuşoğlu himself, are listed as main enemies of the terrorists.

Çavuşoğlu also reminded the Armenian official that Turkey has deported many Daesh terrorists, including some who carried out terrorist attacks in Belgium and France and has informed European authorities about the threat, but the latter failed to take action.

Turkey has prevented the entry of 52,000 people with suspected Daesh-links, while 4,000 suspects have been deported to their countries of origin and arrested over 2,000 Daesh suspects.

With the efforts to clear Daesh terrorists from its borders, Turkey launched Operation Euphrates Shield on Aug. 24. The operation is aimed at bolstering border security, supporting coalition forces, and eliminating the threat posed by terror organizations, especially Daesh.