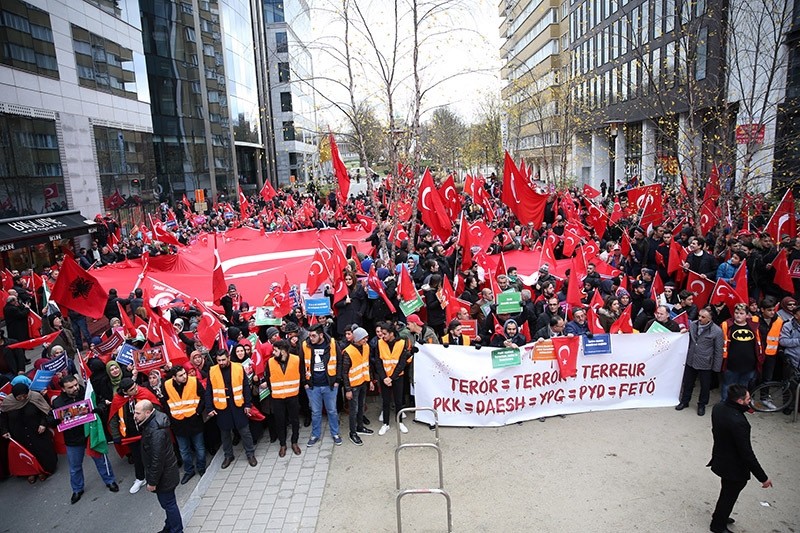 Thousands of Turks descended into streets across Europe over the weekend to protest blatant support from European countries to terrorist groups ranging from the PKK to FETÖ, which target Turkey

Turkey's outrage over the European Union countries' supportive stance toward members and supporters of the terrorist group the PKK, blamed for killing thousands, and the Gülenist Terror Group (FETÖ), blamed for the July 15 coup, was reflected in rallies over the weekend. Thousands of Turks living in the continent took to the streets to denounce terrorism and EU support for perpetrators under the guise of the defense of human rights.
In Belgium and Germany, demonstrators waving Turkish flags and banners with slogans reading "PKK=DAESH=FETÖ=Terror" marched at Teröre Lanet, Demokrasiye Davet (Curse The Terror, Invite Democracy) rallies. The rallies come amid Ankara's spat with the EU over reluctance to capture terror suspects or their extradition and defense of people wanted for terror charges.

Germany and Belgium are especially known for their tolerant and supportive stance toward multiple terrorist organizations, including the PKK, the Revolutionary People's Liberation Party-Front (DHKP-C) and FETÖ. Terrorists fleeing Turkey seek a safe haven in these countries, where they are given shelter and evade prosecution in Turkey.

In Germany, demonstrations organized by Europe-based nongovernmental organizations had a huge turnout. A large crowd gathered in front of the historic Brandenburg Gate. After reciting Turkish and German national anthems, the group waved flags from both countries and chanted slogans condemning terrorism. A joint declaration of protesters read out at the rally said Turkey was an inseparable part of Europe and it was "self-denial" for Europe to claim Turkey does not belong to Europe. Several EU officials have recently started voicing calls to freeze Turkey's membership talks with the union, citing alleged human rights violations in Ankara's combat against terrorism. "We don't accept terrorism, the common enemy of entire mankind, to come between Turkey and Europe on this issue," the declaration said.

Ali İhsan Alacun, one of the demonstrators, said he has been living in Germany for 36 years and the country "never changed" in its attitude toward terrorism. "They have always been hypocritical," Alacun said, referring to Berlin's anti-terror alliance with Turkey that contradicts with the failure to capture and extradite PKK suspects. Turkey says there are outstanding legal cases against 4,500 PKK members in Germany, but only three suspects have been sent back to Turkey so far. "Germany lends these [terrorists] very significant support. I gave Chancellor [Angela Merkel] 4,000 documents regarding this. When I asked her about what they have done, she said the judicial process was continuing," President Recep Tayyip Erdoğan said in late July, pointing the finger at the German government for their lack of cooperation.

Even though German authorities deny that the government does not tolerate the PKK, Germany has allowed PKK propaganda to be spread by supporters of the terrorist group, allowing rallies to be held freely and even allowing a public speech by a senior leader of the group.

In Brussels, home to the European Commission and other key institutions of the European Union, thousands converged at Schuman Square, a few hundred meters away from EU buildings. The crowd first commemorated victims of the July 15 coup attempt for which a junta loyal to FETÖ is blamed and then unfurled a banner reading "Stop Supporting Terrorism." Protesters said in a joint statement they were concerned over Europe "turning its back to values key to peace and prosperity." "As part of Europe's family, it is our right to raise our voice against this dire situation," they said. Protesters emphasized that they expected European countries to side with democracy, human rights and legitimate, elected governments. "This is possible with a principled stance against terrorist groups and anyone supporting them. If the European Union and Belgium do not respect their own designation of certain groups as terrorist organizations, they don't deserve respect," the statement said.

Though the PKK is on the EU's official terrorist organization list, Turkey has complained of the member states' indifference towards the terrorist group. Ankara argues that although EU leaders condemn the PKK terror in rhetoric, the continuing activities of the terror organization point to an anomaly created by EU authorities.

The PKK continues to freely conduct terrorist activities and attack Turkish people around Europe with the help of the encouraging atmosphere offered by European countries.

Last week, 2,000 sympathizers and supporters of the PKK held a demonstration in Brussels with the permission of Belgian authorities. The group has convened at the same point where the weekend's anti-terror protests were held. To Turkey's dismay, this was not the first anomaly for Belgium, according to data obtained from Turkish security forces. Terrorist groups including the PKK and the DHKP-C organized 23 demonstrations in Brussels and Antwerp between Dec. 15, 2015 and Nov. 5, 2016. Also in August, PKK supporters in Brussels were allowed to celebrate the anniversary of the terrorist group's first attack on Turkey in its history and just five months earlier sympathizers set up tents outside EU buildings ahead of a Turkey-EU summit.

Zafer Sırakaya, the head of Union of European Turkish Democrats (UETD) who attended the Brussels rally, said they were with the Turkish administration in its fight against the PKK and its affiliates, Daesh and FETÖ. Sırakaya told Anadolu Agency the PKK emerged as a rising threat in Europe and Turks in Europe convened to "draw attention" to this fact. "European countries should exhibit an unconditional attitude against terrorism," Sırakaya said.
Last Update: Nov 20, 2016 9:25 pm
RELATED TOPICS