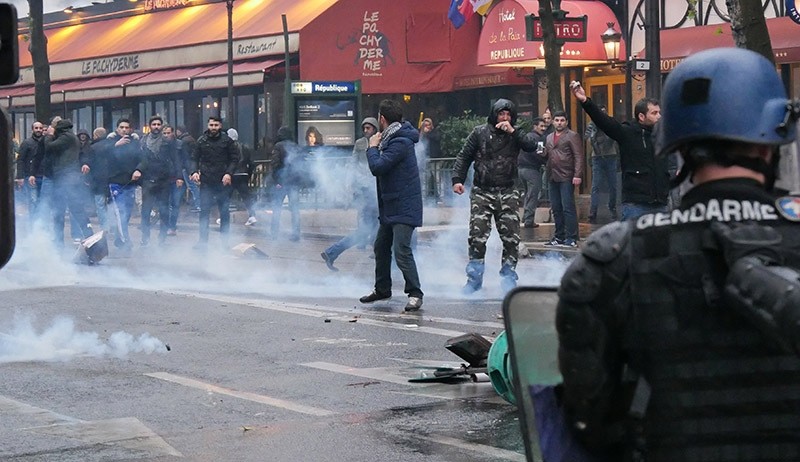 A mob of PKK-PYD terror sympathizers attacked a peaceful protest denouncing terrorism on Sunday in Place de la République, a square in the center of Paris.

The demonstration, supported by Turkish NGO's, was organized under the slogan 'Curse upon terrorism, invitation to democracy' denouncing PKK, PYD, Daesh and all forms of terrorism. The protest gathered several hundreds of people coming from across France. A group comprised of several dozens of PKK-PYD sympathizers attacked the peaceful demonstration with iron sticks, Molotov cocktails, and fireworks, reports said.

At least 15 people, including women and children, were reportedly injured in the attacks. The pro-PKK gang clashed with French police, damaged public property, and broke car windows.

Some protestors criticized the French police for failing to do their job properly, and avoiding to confront the violent group.


The PKK is listed as a terrorist organization by Turkey, the U.S. and EU; the PYD is the Syrian offshoot of the PKK. The PKK resumed a 30-year armed campaign against the Turkish state in July 2015. Ever since, PKK terrorist attacks have killed more than 800 security personnel and claimed the lives of over 310 people, many of which were civilians, including women and children while more than 10,000 PKK terrorists have been killed or apprehended in military operations. The U.S. and the EU, recognizing PKK officially as a terrorist organized, are reluctant to recognize the PYD as a terrorist organization, despite Turkish authorities providing countless evidence which prove undeniable links between the PKK and the PYD.

Many supporters of the PKK, who claim persecution in Turkey, find asylum in European countries. The PKK, exploiting several nongovernmental organization fronts, is active in many European countries including Germany, Austria, Denmark, France, the Netherlands and Greece.

Turkey has often criticized European countries for offering a safe haven for supporters of the terrorist group as well as its active members.