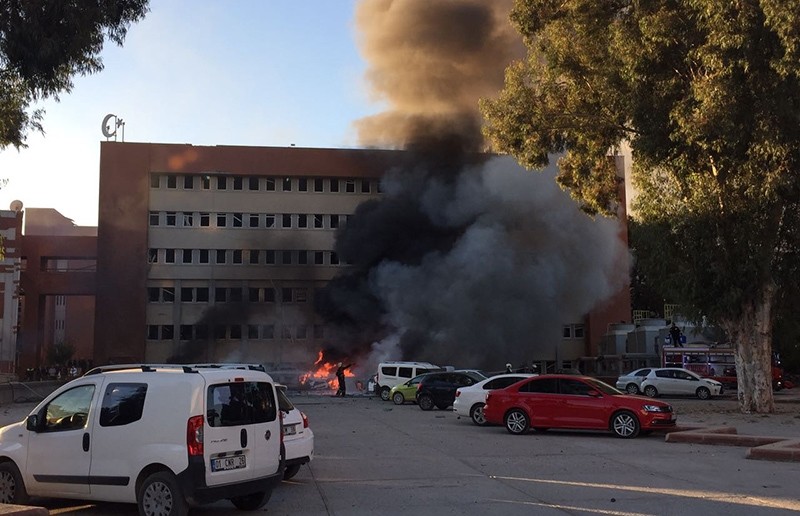 Two people have been killed, with 33 others injured early Thursday in a suspected terrorist attack in the parking lot of the governor's office in southern Turkey's Adana province.

Several ambulances and police teams were dispatched to the area as Labor Minister Mehmet Müezzinoğlu stated that the attack was most likely carried out by the PKK terrorist organization.

According to preliminary reports, a car exploded in the parking lot, causing damage to nearby vehicles and the governor's building. Adana governor Mahmut Demirtaş survived the attack and announced the number of casualties as two dead and 16 injured.

It was reported that later in the day the driver of another bomb-laden car in Adana was shot and captured.

During his visit to the blast site, Energy Minister Berat Albayrak confirmed the casualty toll and said one of the injured was in "serious condition."

Earlier, speaking at the 7th Turkey Energy Summit that began in Adana on Thursday, Albayrak pointed out the hand of "puppeteers" in the attack.

"You are mistaken if you think you can frigthen and discourage this nation with traditional methods or distract it," he said, adding that the attacks would not stop Turkey from going ahead on 'ts own path.

Before the energy minister's remarks, Adana Governor Mahmut Demirtaş told Anadolu Agency the car had exploded at 8:05 a.m. [0605 GMT] in the parking lot close to the office entrance. "It is suspected that a female carried out the attack," Demirtaş said, adding that the license plate of the suspect's car had been identified.

Several ambulances and police teams had rushed to the area, while a police helicopter hovered above.

Nearby vehicles and the governor's building had also been damaged in the incident.

Police have launched an investigation into the incident. A man, who worked at the parking lot, was taken to a police station for questioning, a police source, who spoke on condition of anonymity due to restrictions on talking to the media, said.

Meanwhile, the Prime Ministry imposed a temporary broadcast ban on the blast, the Supreme Board of Radio and Television announced.

Prime Minister Binali Yıldırım was informed about the blast by ministers, according to a Prime Ministry source, who spoke on condition of anonymity due to restrictions on talking to the media.

Deputy Prime Minister Numan Kurtulmuş tweeted on the incident saaying, "I condemn the treacherous attack in Adana and curse terror and its supporters."

Kurtulmuş said Turkey would "resolutely" continue to fight against terrorism and would not "surrender" to terrorism.

Foreign Minister Mevlüt Çavuşoğlu also tweeted: "Terrorists and collaborators targeted our peace in Adana. I wish God's mercy upon our citizens who lost their lives in this atrocious attack."

Turkey's EU Minister Ömer Çelik also tweeted: "The cursed terror continues to target our people. We will struggle against this terror for humanity until the end."

Çelik wished a speedy recovery to those injured.

Turkey's EU Affairs Minister Ömer Çelik tweeted that he had spoken with the governor. Footage captured by local media outlets showed a fire in the governor's building and thick black smoke billowing above. The explosion blew out the windows of the multi-story building.

Turkey has been the target of many terrorist organizations, including the PKK, Daesh and the Revolutionary People's Liberation Party-Front (DHKP-C). The PKK is listed as a terrorist organization by Turkey, the U.S. and EU. The terrorist group resumed its 30-year armed campaign against the Turkish state in July 2015.

Since then, PKK terrorist attacks have killed more than 800 security personnel and claimed the lives of over 310 many civilians including women and children, while more than 10,000 PKK terrorists have been killed or apprehended in army operations.