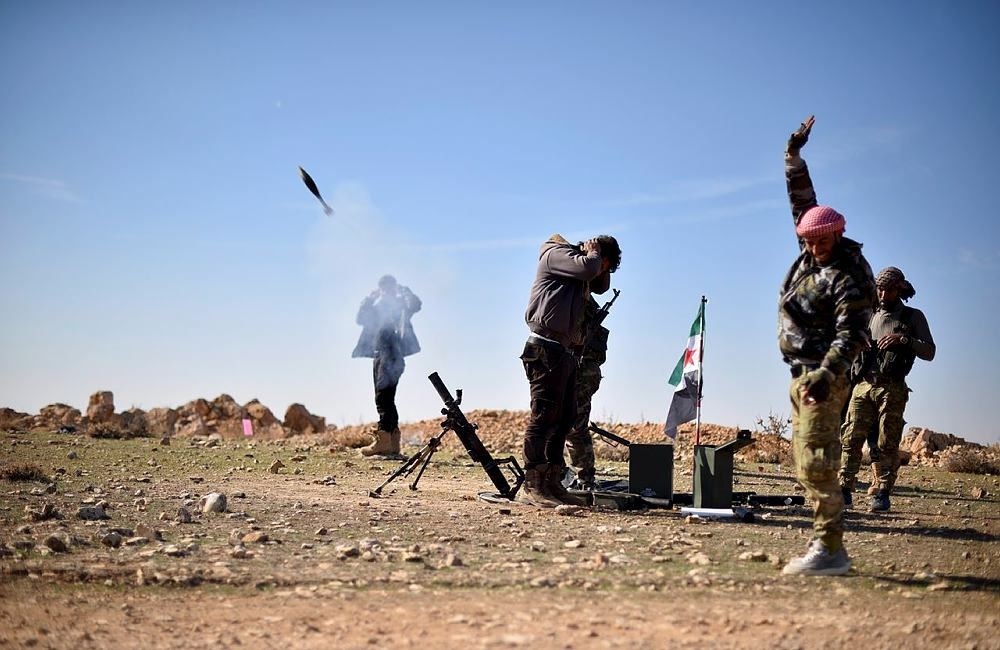 Free Syrian Army fighters during clashes against Daesh terrorists near the Syrian town of Qabasin on Nov. 21.
by Merve Aydoğan Nov 26, 2016 12:00 am

After airstrikes were conducted against the Turkish Armed Forces (TSK) near the town of al-Bab in northern Aleppo early Thursday morning, new questions are being raised on the fate of Operation Euphrates Shield, as well as the future of Turkish-Russian relations. After the airstrikes, which came on the one-year anniversary of the downing of a Russian fighter jet which entered Turkish airspace on Nov. 24 last year, security experts stressed the importance of expanding operations further south, toward Manbij, while emphasizing that the recent airstrikes were solely intended to create a rift between Turkey and Russia.

During an interview broadcast by state-run TRT Thursday night, Prime Minister Binali Yıldırım vowed that Operation Euphrates Shield will continue, reaffirming that turkey aims to prevent the PKK's Syrian offshoot the Democratic Union Party (PYD) from seizing Manbij-Afrin where the terrorist group aims to connect their cantons while eliminating Daesh terrorists. On that note, Retired Lt. Gen. and former head of the TSK General Staff Intelligence Department İsmail Hakkı Pekin spoke to Daily Sabah, stressing the crucial importance of the operation and noting that it must be expanded further south.

"Operation Euphrates Shield was necessary, especially for TSK-backed Free Syrian Army (FSA) fighters, to prevent the establishment of a corridor [by terrorist PYD] near Kobani and the Afrin region. However, the operation must expand further south toward Manbij. Foremost, the operation must continue toward al-Bab before it moves toward Manbij, in order to prevent the corridor from being established to the south. ... Turkey has no interest in moving toward Raqqa," Pekin asserted.

As the operation entered its 95th day, it had seemingly decelerated near the al-Bab region. With that respect, the retired lt. gen. gave two major reasons for the slowing down of operations, pointing to the lack of FSA fighters as the first, main reason: "[The operation] has slowed down due to several reasons including the low participation numbers of the FSA. If the TSK had directly intervened with its own forces, the operations would have been completed quickly. However, in efforts to avoid being perceived as an intruder and to display that the operations are being conducted solely to protect Turkish security interests, the TSK is backing the FSA in the operation," he said. Pekin noted that the second reason is due to ongoing political dialogues between Turkey and regional actors such as the U.S. and Russia.

"As you know, complications occur from time to time during the course of operation and get resolved along the way. Thus, Turkey is currently holding intensive talks on the al-Bab matter with both Russia and the U.S."

Continuing by noting that the killing of Turkish soldiers on Nov. 24 in Syria is likely a provocation meant to strain Turkish-Russian relations, Pekin stressed that the "perpetrators are the ones who gave the exact coordinates of the TSK." Pekin stated that he does not believe that Russia was affiliated with the recent incident, adding that a "red line" must be established in Syria. Echoing Pekin's remarks, retired military officer and security specialist Abdullah Ağar also stressed that the attack on the TSK convoy in Syria was meant to sour relations between Turkey and Russia. Ağar noting that Turkey is not only combating Daesh in Syria but also fighting against "the PKK, which is recognized as the Western world's proxy warrior," he said.

Emphasizing that the operation is actually decelerating and continuing with caution, Ağar said: "It was already known that the operation would become more difficult as it deepened and moved farther south. Al-Bab is the major obstacle that we are facing today. … [The PYD and its armed wing the People's Protection Units] YPG, the PKK, Syria's Assad regime as well as the Shiite militias have diverging plans regarding al-Bab. While the YPG-PKK hastens efforts to connect the Afrin region with the area west of the Euphrates, it also tries to seize regions that were cleared of Daesh. The[Syrian] regime is trying to further enhance its influence over Aleppo and surrounding region at the same time." The retired military officer also pointed to the necessity of maintaining the demographic structure of al-Bab and the region for the sake of al-Bab's peace, security and welfare in the future.
RELATED TOPICS