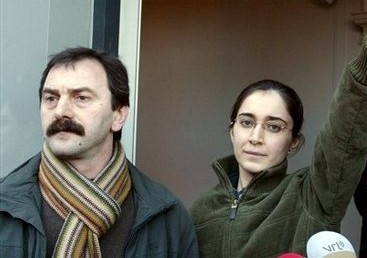 German authorities detained a high-ranking militant of the Revolutionary People's Liberation Party-Front (DHKP-C) on Friday in the German city of Hamburg in an operation conducted weeks after the country's interior minister said they were "open and ready" to cooperate with Turkey in the fight against terror.

One of the group's top leaders, Musa Asoğlu was detained by German security forces in an anti-terror raid in his apartment and he is reportedly still under detention.

The Federal Prosecutor's Office released a statement on Saturday, saying that Aşoğlu, a publicly known terror figure, was responsible for numerous killings and terror attacks in Turkey.

The statement also said that Aşoğlu was accused of leading a terrorist organization, giving orders to carry out terrorist attacks, supervising terrorists and obtaining donations for the terror group.

The statement added that Aşoğlu gave his testimony on Saturday, and an arrest warrant is expected to be issued soon until the investigation is completed.

In November, Interior Minister Thomas de Maizière said that "for us, all terrorism, regardless of motive, is something that we in Germany fight against'."He added that they would be "open and ready" to cooperate with Turkey.

Aşoğlu is among the top wanted terrorist fugitives on Turkey's list. The United States State Department had also offered a $3 million reward for information on Musa Aşoğlu, as part of the Department of State's Rewards for Justice program in 2014.

The DHKP-C, although less influential in Turkey than other terrorist organizations such as the PKK, still represents a considerable threat to the country with a string of attacks in past years. The group was behind the suicide bombing that targeted the United States Embassy in Ankara in February 2013, which killed a Turkish security guard. Just a month later, the group staged attacks on the Justice Ministry and the headquarters of the ruling Justice and Development Party (AK Party) in the capital.

The organization's last known attack in Istanbul was on March 3. Two female militants of DHKP-C were killed after they opened fire on a bus carrying members of riot police in Istanbul in a non-lethal attack. On Wednesday, a suspected DHKP-C member was shot dead after he attempted to carry out an attack targeting governorate building in the eastern city of Tunceli.