Turkey's Chief of Staff Akar meets with his US counterpart Dunford 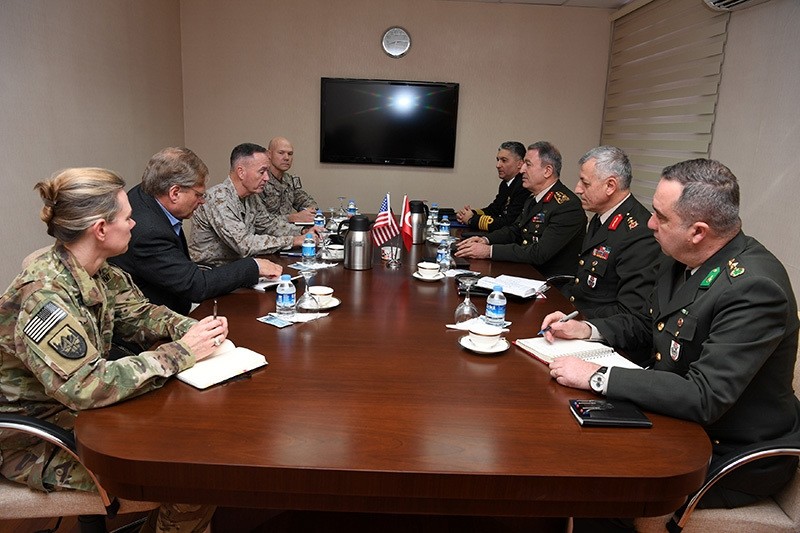 Turkey's Chief of General Staff Gen. Hulusi Akar met with the U.S. Chairman of the Joint Chiefs of Staff Gen. Joseph Dunford at İncirlik Air Base in Turkey's southern province of Adana yesterday, according to a statement released on the Turkish Armed Forces' (TSK) website.

Akar, along with the commander of the Turkish Army Gen. Salih Zeki Çolak, traveled to Adana on Monday to inspect the troops stationed there and following the visit, Akar met his U.S. counterpart.

Though an official statement regarding the details of the meeting was yet to be released, the main topics of the discussion, according to experts, involved the Syrian civil war and the global threat posed by some regional terror groups, such as Daesh, the PKK and its Syrian offshoot, the Democratic Union Party (PYD).

The two generals have had several meetings in the recent months discussing regional developments, most importantly the Syrian crisis and the anti-Daesh operations in Iraq.

During Dunford's visit to Turkey in November, the two countries agreed to work on a plan to seize and hold the Syrian city of Raqqa, the so-called capital of the Daesh terrorist group.

The Pentagon was yet to release any detail, however, a Defense Department News quoted Gen. Dunford as saying, "The coalition and Turkey will work together on the long-term plan for seizing, holding and governing Raqqa," after the visit.

The generals met to coordinate operational planning in different areas, including Raqqa, Mosul, Iraq and others, according to the Pentagon.

Turkey has been backing Free Syrian Army (FSA) fighters in its Operation Euphrates Shield, launched on Aug. 24. As a result of the operation, the FSA has so far been able to liberate a few key Syrian towns, including, Jarablus, Azaz and Dabiq, and is on the verge of capturing al-Bab from Daesh.

The operation on al-Bab has been launched with areas along the way being liberated. However, the FSA has not yet entered the town itself.

Meanwhile, Ankara also argues that after liberating al Bab from Daesh, its next step would be to eliminate the PYD and its armed wind, the People's Protection Units (YPG) from Manbij.

Ankara considers the YPG a terror offshoot of the outlawed PKK, which is itself listed as a terror organization by the U.S., Turkey and the EU.

Turkey has voiced its concerns over the YPG moving into Manbij, which has a predominantly Arab population. It has also warned against the YPG's aim of making demographic changes in the areas captured from Daesh. YPG presence has become a matter of political friction between Ankara and Washington as Ankara argues that the U.S.'s support to the Syrian Democratic Forces (SDF), predominantly led by the YPG, is eventually transferred to the PKK and ultimately used against Turkey.

Despite the several meetings between the two generals in recent months, it is not known as of yet, whether or not an agreement has been reached between the two allies about the next steps regarding Raqqa and the Mosul operations.

The frequent visits made by Dunford to Ankara have also been interpreted as a strategic move by the U.S., amid the recent signals of a military cooperation between Russia and Turkey on developments in Syria.

The operation on Iraq's Mosul has also been a matter of discussion between Ankara and Washington, as well as the Iraqi central government. Turkey argues that the Mosul operation should be conducted through legitimate armies and local forces, as it believes that including militia groups will lead to further clashes in the region and cause ethnic and sectarian tensions.

Mosul is Iraq's second largest city after Baghdad, largely populated by Sunni Muslims, including Arabs, Turkmens and Kurds. Ankara has warned Washington and Baghdad of the possible sectarian clashes as a result of the central government's plan to include Shiite forces, the Hashd al-Shaabi, in the operation, and the allocation of power to Shiite forces in control and governance of a predominantly Sunni region.