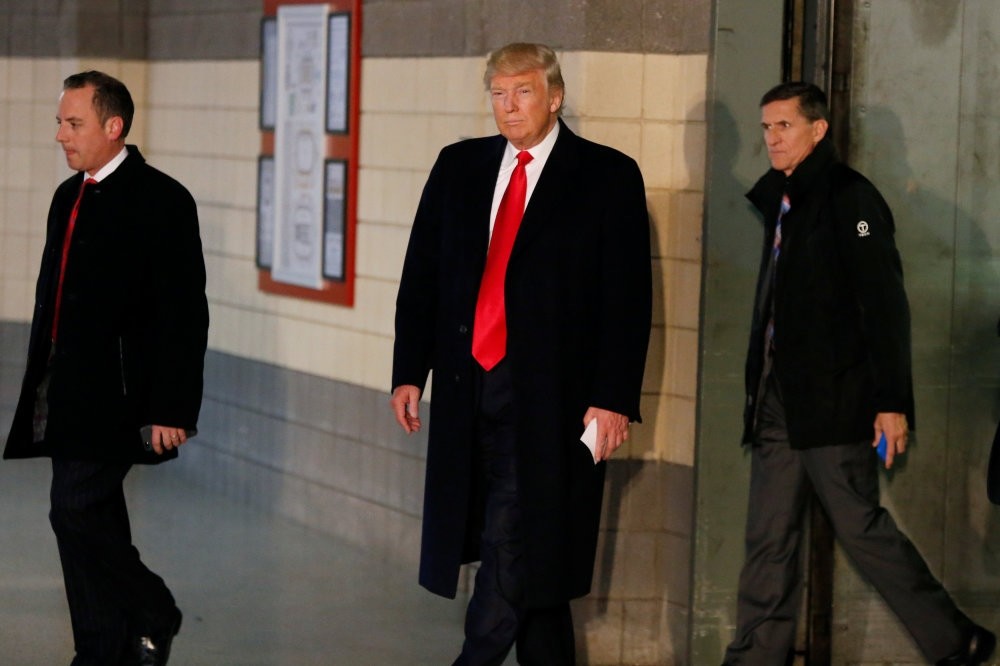 The U.S. President-elect Donald Trump and retired U.S. Army Lt. Gen. Michael Flynn (R). Flynn is on Gu00fclentist figures' target due to his negative-view on Fetullah Gu00fclen.
by Mustafa Kırıkçıoğlu Dec 10, 2016 12:00 am

Having strongly gave support to Hillary Clinton financially and in action, Gülenists disappointed by Trump's victory due to his administrations expected negative stance to their leader Fetullah Gülen and his terror group, and continue their restless anti-Trump campaign especially on social media

Donald Trump's unexpected victory in the Nov. 8 elections, becoming the 45th president of the U.S., had a devastating effect on his wide-based list of opponents, including U.S. newspapers, celebrities, politicians, the EU and countries considered to be traditional allies of the U.S. Being one of the lesser-known member of this "losers' club," the Gülenist Terror Group (FETÖ) and its fugitive figures, who publicly expressed their strong support to Democrat candidate Hillary Clinton during her presidential campaign and financially supported her, also grieved the results. Despite many of the above-mentioned opposition figures changing their attitude after Trump's unpredictable victory, FETÖ members have been continuing to target Donald Trump and his officials on his expected administration, particularly on their social media accounts.

It was publicly known during the election period that people close to Fetullah Gülen, the leader of FETÖ and the mastermind behind the failed 15 July coup attempt, established strong connections with the Democrat campaign. They were seeking to keep their leaders' status, which has been a safe haven for Gülen in Pennsylvania living in self-imposed exile on a 400-acre property in the foothills of the Pocono Mountains since 1999.

Despite Turkish authorities issuing an official request for Gülen's extradition on Sept. 13, under a 1979 treaty between Turkey and the U.S., the Obama administration's reckless approach toward the issue has encouraged more Gülenists to support Democratic governance.

In regard to their support of Clinton, prominent Gülenist figures carried out a campaign on their social media accounts against Donald Trump during the election race. As one of the examples, FETÖ member Mahir Zeynalov accused Trump's campaign of "being [in a] relationship with foreign governments Russia and Turkey" in his tweet on Nov. 9, and threatened the elected-U.S. government by saying these relations will "be a headache for them." Another Gülenist, Sevgi Akarçeşme, the former editor-in-chief of Today's Zaman newspaper, which was shut down by a court decision due to its terror links, described Trump's politics as "fear-mongering" and said politics even "would benefit from Orlando attack," the deadliest terrorist attack in the U.S. after 9/11, which left 49 dead, in her tweet on July 12. She also tweeted, "Every time I go through the torture of listening to Trump, I feel as if I'm watching a dark comedy show. This can't really be happening to the U.S."

Regardless of the candidates' other policies, the reason that Gülenists' strongly support Hillary while defaming Trump lied behind the candidates' and people's on their views on the extradition of Gülen. As mentioned above, FETÖ showed strong support for Hillary in order to see a return of their "investments" on her, and have strongly stood against Trump. The people expected to take duties in his cabinet, especially Lt. Gen. Mike Flynn, announced to be National Security Adviser by President-elect Trump, were declared as an "enemy" by FETÖ, due to his stance against Fetullah Gülen. After the election, Flynn said, "What would we have done if right after 9/11 we heard the news that Osama bin Laden lives in a nice villa at a Turkish resort while running 160 charter schools funded by the Turkish taxpayers?" in an article and suggested the U.S. handover Gülen to Ankara, the "U.S. ally in the region." Because of this stance, Gülenists put him as a target and simultaneously took action against him on social media. Zeynalov implied that Flynn takes bribes in his tweet on Nov. 11. "Trump's top defense adviser gets money from Turkey, whitewashes Erdoğan on Election Day," he said. Another prominent Gülenist, İlhan Tanır, also began intensely sharing posts against Flynn on his Twitter account after Nov.10, two days after Trump was elected, which alleged that Flynn is the Turkish government's lobbyist, and even might be a "Russian informant."

Gülenists often choose to compare Trump to President Recep Tayyip Erdoğan, their "arch-foe." Akarçeşme tweeted on Oct. 14: "We must be a cursed generation to experience the era of politicians such as Erdogan, Trump & similar others who are not supposed to be there." On Dec. 3, İhsan Yılmaz, a FETÖ member who has been living in the U.S. for many years tweeted: "Trump: American Erdogan!"

FETÖ's support was not only confined on social media campaigns and prominent figures' supportive statements. A democratic source said some of FETÖ figures made nearly $2 million in donations to the presidential candidate of the Democratic Party, Hillary Clinton, during her campaign, Anadolu Agency reported on Nov. 12. The Gülenists' donation to the Clintons consisted of 3 percent of the total amount; regarding the total amount of donations to her campaign was around $600 million.

Trump's adviser on foreign policy Walid Phares described donations from members of a group seen as terrorists by NATO ally Turkey to the Clinton Foundation as "shocking," and said "it will be one of the first issues the Trump administration will investigate."

Also, Democratic vice presidential nominee Tim Kaine has had extensive relations with Gülen's followers through multiple organizations and spoke in support of Gülen-run networking events. He was also a speaker at the Gülen-linked American Turkish Friendship Association (ATFA) in 2013 and last year attended the annual convention of the Turkic American Alliance (TAA), Gülen's business arm whose main purpose is to influence congressmen. Additionally, Kaine sent a congratulatory letter to the Washington-based Rumi Forum on Nov. 20, whose honorary chairman is Fetullah Gülen.

High-level financial administrator and political activist in the Democratic Party, Murat Güzel said to AA the relation between FETÖ and the Clinton family is "not a new issue," adding they spent lot of effort to maintain their good relation as they believe that Hillary Clinton would become the new President of the United States.

What will become of Trump's administration attitude toward Fetullah Gülen and his terror group is one of the most speculated topics for Turkish people, and without a doubt the issue will be a determinant of Gülenists' stance to Trump in the upcoming months.