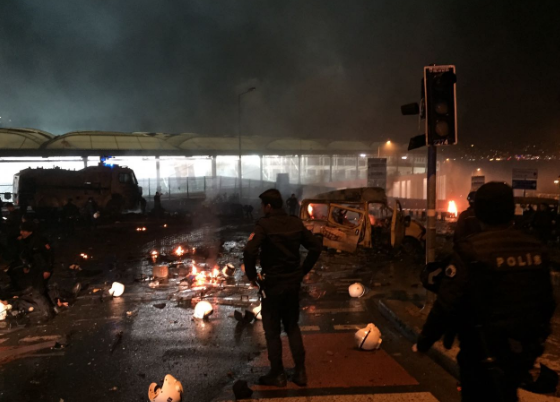 Deputy Prime Minister Numan Kurtulmuş said two bombs blasted; one suicide bomber self-detonated in the Maçka Park, and a car bomb was blown up on a nearby street. Kurtulmuş also noted that both blasts took place at an interval of 45 seconds.

Soylu noted that the identity of one victim is still being investigated.

"Such cruel acts do not discourage us, but rather bring us together as a nation" Soylu told reporters, and added that Turkey will continue to take measures to fight terrorists.

The Interior Ministry also announced that 12 suspects were detained in relation to the terrorist attack.

A number of ambulances and fire squads were dispatched to the scene after the blast, which was heard from many places across the city.

The statement released by the terror group TAK said that nobody in Turkey should expect to lead a peaceful life as long as these situations persist and Abdullah Öcalan, the imprisoned PKK leader, remains behind bars.

President Recep Tayyip Erdoğan issued a statement following the attack, saying that people have been killed in the explosion. He stressed that PKK, Daesh and the Gülenist Terror Group (FETÖ) terrorists all target Turkey for the same purpose.

Erdoğan said the attack targeted police and civilians, and aimed to cause as many casualties as possible. The President also said that Turkey is alone in its fight against terror, but will not give up and will recover as soon as possible.

He postponed a planned visit to Kazakhstan -which was scheduled to take place on Sunday- following the terror attack, presidency sources said.

Prime Minister Binali Yıldırım issued a statement saying that this vile terrorist attack, where suicide bombers were used will be dealt with and will not go unpunished, and this attack will not manage to break the unity of the nation.

Yıldırım also signed a decree sent to all government departments announcing one day of national mourning across Turkey, asking to lower flags at half-mast.

Istanbul's Chief Prosecutor's Office charged six prosecutors, including İsmail Uçar, who is a specialist in tracking terror cases, to investigate the blasts and to ensure the judicial follow-up.

Photos and videos taken at the scene showed smoke rising from behind a newly built stadium.

Witnesses at the scene said gunfire could be heard in what appeared to have been an armed attack on police, but these reports have not been confirmed.

The explosion has also been caught live on the cameras of BJK TV.