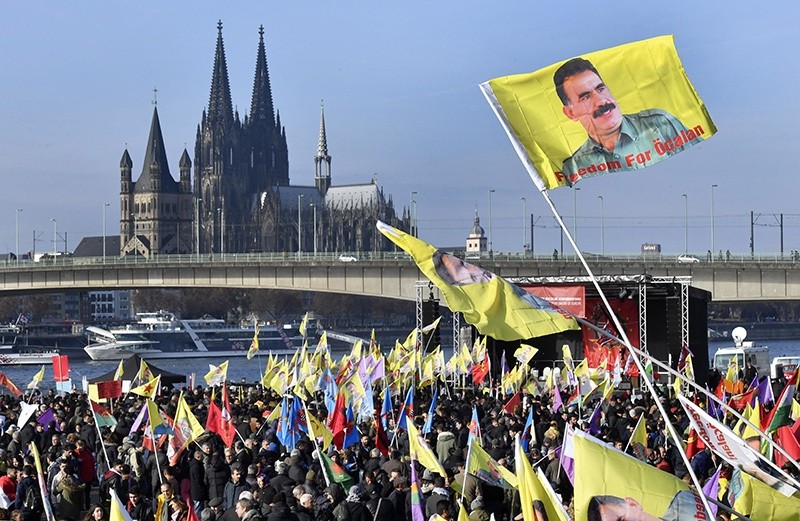 The PKK terror organization gains 30 million euros income per year by collecting fees from its foundations in European countries despite the group being listed as a terrorist organization by the EU, according to Turkish intelligence sources.

The outlawed PKK, which was listed as a terror organization in 2002 by the EU Commission, started organizational activities in EU countries back in 1999, thanks to some political assistance provided by it member states.

The PKK, which has killed thousands of innocent people in Turkey, maintains a wide elbow room in the EU countries. Ankara has repeatedly voiced its concerns over European countries supporting the PKK, both politically and financially.

The terrorist PKK does not only kill civilians and security officials in Turkey, but also operates the country's largest drug trafficking ring.

Between 2006 and 2016, Turkey requested the extradition of 136 PKK terrorists from German authorities. Only three have been handed over so far, according to the International Law and Foreign Affair General Directorate of the Justice Ministry.

The general directorate of the ministry also said, besides Germany, Turkey requested extraditions of another 263 terrorists from 20 EU countries, between 2007 and 2016, but only eight of them have been sent back.

EU authorities recognize the PKK's terror foundations within European borders as official nongovernmental organizations and the deadly terror group opens and operates its associations in Europe by deceitfully naming them "democratic center," "Kurdish people centers," or "community centers." However, these places are often used by the PKK to spread terror propaganda.

All these foundations linked to the PKK belong to an umbrella of associations led by Yüksel Koç and Şemse Güllü called The European Kurdish Democratic Societies Congress (KCD-E), based in Belgium's Charleoi.

Meanwhile, the PKK's propaganda in Europe is conducted by The Kurdistan National Congress (KNK), which holds meetings every year in Belgium capital Brussels.

At its 16th annual meeting held in Sept. 2, 2016, the KNK called for a fight against the Turkish state. The congress are led by PKK militants, including Nilüfer Koç, Rebuvar Teşid and Adem Uzun.

The PKK has also intensified its attacks against Turks in European countries, following the detention of its political wing, Peoples' Democratic Party (HDP) deputies, due to their open support to the terror group and its members.

The terror group is also being allowed to protest against the Turkish state in many European cities, declaring war on the government and demanding the release of their imprisoned leader, Abdullah Öcalan.

"When we ask how these weapons fell into the hands of the PKK, their answer is ready; they claim that these were sent to the anti-Daesh coalition," Erdoğan said.

Since July 20, 2015 the PKK terror organization has killed more than 787 security forces members and 312 civilians, injuring another 4,000 law enforcers and more than 2,000 civilians.

In operations against the separatist terror group, more than 5,500 weapons, 650,000 ammunition, 142 tons of explosives and nearly 15,000 bombs were recovered, the president revealed, adding that the West has turned its back to the realities of the terror organization.

Germany and Belgium are especially known for their tolerant and supportive stance toward multiple terrorist organizations, including the PKK, the Revolutionary People's Liberation Party-Front (DHKP-C) and the Gülenist Terror Group (FETÖ). Terrorists flee Turkey to evade arrest or prosecution and are offered safe haven in these countries.

Besides, Belgium and Germany, the PKK is also active in other EU countries such as Austria, Denmark, France, the Netherlands, Sweden and Greece.