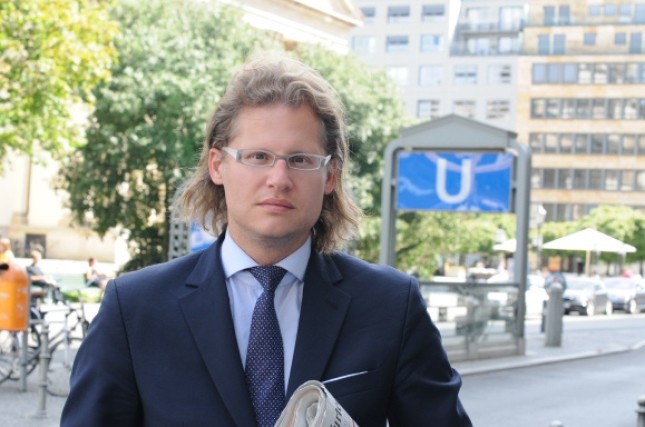 German journalist Martin Lejeune was attacked with a knife by PKK sympathizers in an event he attended last week, which was protected by the police. The attack showed the PKK's influence in the country and German authorities' broad tolerance toward them despite being designated a terrorist organization by the EU

A German journalist was attacked by PKK terror group followers Sunday during a rally organized by the group's sympathizers in Berlin as he was covering the event.

Journalist Martin Lejeune was reportedly attacked by three men showing him a knife and attempted to hit him. The journalist, who said he has received threats from PKK followers recently, reportedly escaped the attack by running into a restaurant.

Speaking to Daily Sabah, the German journalist said the event was approved by the authorities, and protected by the police, despite the PKK being recognized as a terror group by the EU.

"The protesters were happy and even though it has not been 24 hours since the terrorist attack in Istanbul, the PKK protesters were celebrating," he said and added: "I was out with two of my friends and wanted to film and document how the supporters of terror and the PKK, which is actually officially banned in Germany, can freely demonstrate. I wanted to show what is possible (for terrorists) in Germany."

Lejeune criticized the German authorities for being in active with the PKK, saying, "Supposedly the PKK is banned, but none of the security authorities are doing anything. The PKK has an official office and can do whatever they want. This office I am talking about is well-known. They are even allowed to enter the Bundestag. Salih Muslim of the YPG [People's Protection Units] was greeted like a state guest in the Bundestag."

He further criticized the authorities for ignoring the free activities of the group, saying, "I got the impression that the PKK can control the roads in Berlin and the security authorities do not stop this."

"The PKK, a terrorist organization, can collect money in front of the police in Germany. Presumably the money then flows into arms in Turkey," he added.

Commenting on the recent attack against him, Lejeune said: "In Cologne during a PKK demonstration my camera was snatched from my hands and the police did not do anything. Yesterday, one of the attackers was armed with a folding knife and threatened me but the police did not mind. I do not want to impute anything to anyone but it seems as if the police are only there to protect the PKK and its supporters."

Ankara has repeatedly criticized the German government for not cooperating against the PKK terror group, particularly in extradition of the group's members who reside in Germany.

"It is known that the Turkish government gave the German government about 4,500 files of individual terrorists and those have not been evaluated yet. The reason for this was always "we do not have time to take care of this. Imagine if Germany had 4,500 files on Daesh terrorists and they would not look through them. That would be a big scandal, wouldn't it? Or if Daesh demonstrated here on the public streets? Or if Daesh demonstrated in public squares protected by the police? If Daesh flags were being shown in Germany? Would that be a scandal, too? Here is an obvious double standard. One terror organization is allowed, perhaps because – like the British have done – to weaken, to split or rule over certain countries," Lejeune also underlined.

Anadolu Agency had reported recently that between 2006 and 2016, Turkey requested the extradition of 136 PKK terrorists from German authorities. Only three have been handed over so far, according to the International Law and Foreign Affair General Directorate of the Justice Ministry, the report said. The general directorate of the ministry also said, besides Germany, Turkey requested the extradition of another 263 terrorists from 20 EU countries, between 2007 and 2016, but only eight of them have been sent back.

Lejeune also criticized the German media for ignoring the PKK attacks against him, saying, "Unfortunately, the freedom of press in Germany is really relative. You can criticize Turkey, criticize [President Recep Tayyip] Erdoğan, criticize [U.S. President-elect Donald] Trump, but there are also red lines. One must not write anything that harms the PKK or Israel. This is also true for the editorial offices, the newspapers and the media. One can also remember the [Abdallah] Öcalan interviews published in the German media before the terrorist leader was arrested."

Though the PKK is on the EU's official terrorist organization list, Turkey has complained about the member states' indifference toward the terrorist group. Turkish institutions, establishments and Turks in Germany have been attacked by PKK followers numerous times. Ankara argues that, although the EU leaders condemn the PKK terror in rhetoric, the activities of the group in EU countries contradict the EU authorities' stance.