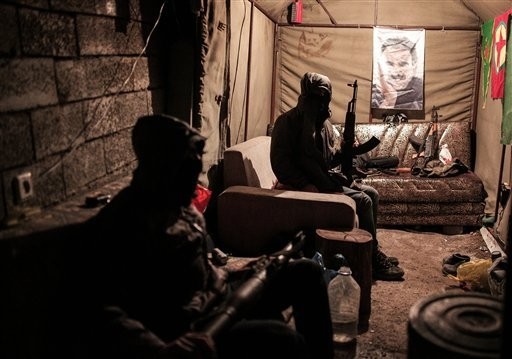 EU Minister Ömer Çelik said in Berlin the PKK steals the democratic rights of Kurds with aims to establish a new status quo in the region. He also criticized the international community over its lack of support to the Syrian people facing ‘genocide'

As part of Turkey's long-standing combat against the terrorist PKK, European Union (EU) Minister and Chief Negotiator Ömer Çelik has stressed that "the PKK has a policy of coercion against the Kurdish people." As part of his visits within the scope of "Turkey-EU civil society dialogue meetings," Çelik visited Berlin where he held meetings with nongovernmental organizations (NGOs) as well as businessmen in Germany. Speaking exclusively to a group of journalist in a meeting Thursday, Minister Çelik touched upon the terrorist PKK and its coercion policies against the Kurds.

He also criticized the international community over its lack of support to the Syrian people facing "genocide" as he said, "one must question what those criticizing Turkey over human rights are doing for Aleppo."

Ankara has repeatedly criticized the German government for its failure to cooperate against the PKK terrorist organization especially in relation to the extradition of PKK affiliates residing in Germany. Regarding the issue, Çelik criticized the Peoples' Democratic Party's (HDP) affiliation to PKK and added that "the PKK steals the democratic rights of Kurds with aims to establish a new status quo in the region." He continued on by noting that "Kurds have long faced an injustice, they were oppressed. However now, as a result of Turkey's democratization process during the Justice and Development Party (AK Party) rule, these rejection, denial and assimilation policies have all been halted through the reconciliation process as well as the National Unity and Brotherhood Process.

There was stability in northern Iraq to a certain extent and for the first time Kurds are being assimilated by some sort of terrorist groups claiming to represent their rights. In reality, aside from being a terrorist group, the PKK has an assimilation policy toward Kurdish people," said the EU minister, drawing attention to the PKK's coercive strategy which aims at forcing the Kurds to follow their ideology.Stating that the mountains of the southeast were finally opened for tourism and children were accessing proper education with the reconciliation process, Çelik said that the PKK, through its "pro-trench tactic," not only took away Kurdish children's future but also aimed to include itself in a "nasty alliance" in the Middle East. He also criticized the pro-PKK HDP's position and stressed that the HDP had the most important responsibility throughout this process.

"The most important responsibility was on the HDP when the process was going positively and they did not ask the PKK 'why are you not laying down arms, why are you still abandoning these children to your pro-trench tactics?' Instead, they did the quiet opposite of what was supposed to be done and began to adopt a discourse more radical than Qandil [the mountain headquarters of the PKK]," Çelik said. Further adding to his remarks, Turkey's EU minister addressed a possible new establishment in the Middle East through terrorist groups. "I believe that there are aims to establish a Baath-like structure in the Middle East through the PKK and other terror groups… Through the PKK, PYD [Democratic Union Party] and other relevant terror groups, they are trying to re-establish the Baath structure by claiming to represent the rights of Kurdish people here, but are rather stealing the rights of Kurds to establish a new status quo," the EU minister stated and added, "Whenever the rights of Kurds are being represented democratically and an environment of joint welfare is being established, it always gets sabotaged by the PKK."

Commenting on the Assad regime's current killing spree of civilians in Aleppo, Çelik criticized the international community's lack of action and support to the Syrian people. "One must question what those criticizing Turkey over human rights are doing for Aleppo." Adding on to his remarks by stating that the "non-interventionism policy" of the West has brought about the current situation in Syria, Çelik said, "it is not just violating human rights in front of the modern world, but a people are being subjected to genocide."

He further added that, "Everything gained in favor of humanity is tested out in Aleppo. Why was the cease-fire declared and violated again? Regime forces cannot tolerate the time span and the passage way opened for civilians to exit."In regards to Turkey-EU relations, Çelik stated that the problem between Turkey and the EU is a reflection of the crisis that the EU is facing due to conflict in its own values. He once more touched upon the EU's "lack of vision" in relations with Turkey and indicated that "Although Turkey believes in the EU membership as strategic partnership and that it is significant for its national interests, we do not want to be a part of a Europe that is to be led by ideologies such as PEGIDA." He further urged that European standards and values be global and announced that the customs union agreement with the EU is being revised. In response to concerns on the EP's decision to freeze membership talks with Turkey and the U.K.'s Brexit decision, Çelik said, "The world will follow the path Turkey and the U.K. have chosen to take."
RELATED TOPICS