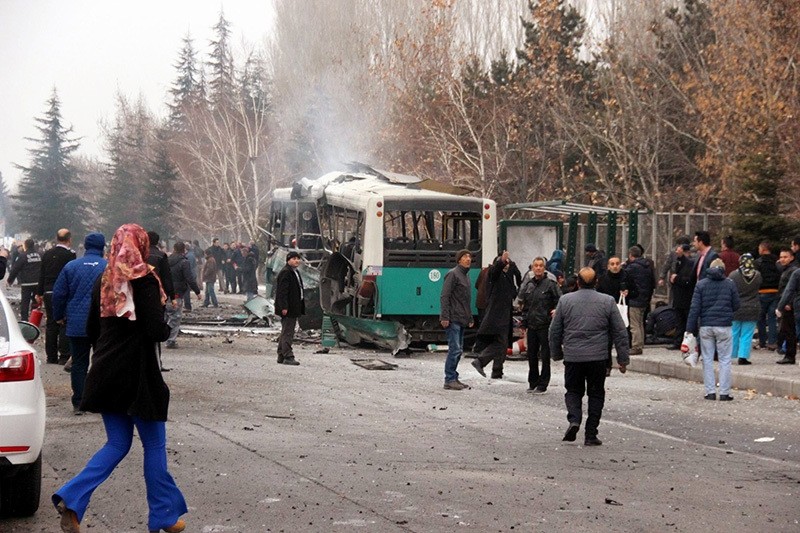 At least 14 soldiers have been killed, 56 others have been injured after a car bomb targeted a public transportation bus near a university campus in central Turkish province of Kayseri, a statement by the Turkish military said on Saturday, a week after a deadly PKK-led terrorist attack killed 44 people in Istanbul.

Interior Minister Süleyman Soylu said that security forces have identified the perpetrator of the attack and seven suspects have been detained, and five are sought in relation to suspected PKK-led terror attack in Kayseri.

The blast reportedly took place around 08:45 a.m. local time when a public transportation bus carrying civilians and off-duty soldiers in front of the entrance of Erciyes University campus in Kayseri was hit by a car-bomb, the military said.

The soldiers, consisting of low-ranking privates and non-commissioned officers were on leave from the commando headquarters in the city, it said in the statement.

"The wounded passengers have immediately been transported to nearby hospitals and are receiving treatment" the statement said.

President Recep Tayyip Erdoğan said the attack targeted all the nation through the police officers and soldiers, reiterated that terrorist attacks will not manage to break the unity of Turkey. Erdoğan also stressed that Turkey is under joint attack from terrorist organizations, while also especially referring to the separatist terrorist organization.

Prime Minister Binali Yıldırım said off-duty soldiers were targeted in the terrorist attack, he also noted that attack was carried out through suicide bombing.

Interior Minister Süleyman Soylu said that 12 of the wounded are in intensive care unit, while six are in critical condition.

The Radio and Television Supreme Council (RTÜK) declared a temporary broadcast ban on the explosion to prevent the publication of things that may cause "fear in the public, panic and disorder and which may serve the aims of terrorist organizations."

Chief of General Staff Hulusi Akar has informed President Recep Tayyip Erdoğan regarding the blast in Kayseri province, while Prime Minister Binali Yıldırım has reportedly cancelled his visit to Konya and is holding a security meeting.

General Akar also issued a statement condemning the attack, saying that the Turkish military will continue its anti-terror fight with determination until all terrorists are destroyed.

Prime Minister Binali Yıldırım is expected to make a statement regarding the attack.

The U.S. Embassy in Turkey also condemned the terrorist attack.

We condemn the terrorist attack in Kayseri. No cause could justify such heinous acts.

A day later, the terror attacks were claimed by PKK's suicide team TAK, which is described as a hardliner splinter group that claims PKK attacks targeting civilians in a public relations effort against American and European nations.