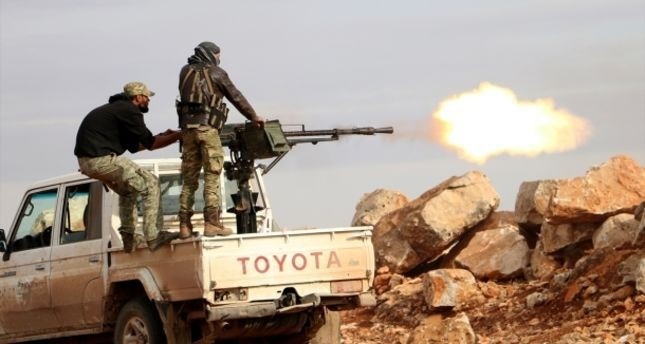 As the Turkey-backed Operation Euphrates Shield continues to eliminate Daesh from Turkey's southern border, and move southwards toward Syria's al-Bab, the PKK has intensified attacks against Turkey to isolate it from developments in Syria and Iraq

After Turkey employed a new anti-terror strategy, which includes fighting and eliminating the problem at its source, the Turkish military-backed Free Syrian Army (FSA) has successfully destroyed 217 Daesh terrorist targets in northern Syria on the 117th day of the ongoing Operation Euphrates Shield, the Turkish Armed Forces (TSK) announced Sunday.

According to the statement, on the 117th day of Operation Euphrates Shield, which will soon move to capture the Daesh-held town of al-Bab, 160 Daesh targets were hit by ground vehicles, while 57 targets, including arsenals in the surrounding regions of al-Bab, Bzagah, Zammar, Suflaniyah and Qabr al-Muqri, were destroyed by airstrikes. Turkey has expressed that, through its new anti-terror strategy, it will eliminate terror threats at its sources, before they are able to carry out attacks. As such, with the launching of Operation Euphrates Shield on Aug. 24, Ankara has been aiming to eliminate the Daesh terror threat from Turkey's southern border, as well as the PKK's U.S.-backed Syria affiliate, the Democratic Union Party (PYD), and its armed wing, the People's Protection Units (YPG).

The operation has been pushing southward to clear Daesh from al-Bab, forming a 5,000-square-meter terror-free zone comprising of the towns of al-Bab, al-Rai, Azaz, Jarablus and Manbij. The terror-free corridor will ensure security for Turkey's southern border with Syria, while providing a safe shelter for locals in the region, which would stop the mass influx of refugees coming into Turkey.

According to military sources more than 1,860 square kilometers (700 square miles) of land in northern Syria, have so far been cleared of Daesh terrorists as part of Operation Euphrates Shield, including formerly Daesh-held Jarablus, Azez, and Dabiq.

Ankara has been also pressing to clear the YPG from Manbij, east of the Euphrates River, to the west. Despite Turkey reiterating concerns to its U.S. counterparts, the terrorist group has not yet left the area.

President Recep Tayyip Erdoğan has repeatedly warned that the next target for the Turkish military after liberating al-Bab will be Manbij, as part of Ankara's plan for a terror-free zone in Syria.

Speaking to reporters, Prime Minister Binali Yıldırım said on Saturday that the PKK leadership in Syria and Iraq has told its terrorists to carry out suicide attacks by whatever means necessary. Highlighting that Turkey's new anti-terror strategy has reached a new level of success, Prime Minister Yıldırım added that the PKK has lost major capacity to carry out attacks through its rural militants. Yıldırım also added that with the successful operations in Syria, the Daesh terror threat has been mainly limited from Turkey's southern borders. "We will also conduct similar operations in all of our southern borders," Yıldırım added.

Turkey has long argued that the presence of the YPG in northern Syria, and the PKK in Iraq's Sinjar constitute an existential threat to its national security. After a recent terror attack in Istanbul, as well as Saturday's suicide car bombing in the central Kayseri province, analysts have argued that the attacks have direct links to the PKK establishments in Iraq and Syria, and that the aim is to isolate Turkey from regional developments, particularly in Iraq and Syria.

Speaking to Daily Sabah, Burhanettin Duran, director of the Ankara-based Foundation for Political, Economic and Social Research (SETA), said that the recent attacks by the PKK terror group cannot be disconnected from Turkey's successful cross-border operations in Syria, namely Operation Euphrates Shield. "Once the PKK was unsuccessful in its urban warfare in Turkey's southeastern region, it has now chosen to use suicide car bomb attacks, as a tool to diverge Ankara's enhanced anti-terror focus in Syria and Iraq," Duran said. He added that, with the upcoming term of U.S. President-elect Donald Trump, a new equation of regional balances will be established and that the PKK's heightened suicide attacks are part of its preparations that aim at creating an internal tension to draw attention on Turkey, portraying it as an unstable actor in the international arena.

Duran also said that with the cease-fire developments in Aleppo, Turkey's operations may slow down in Syria, which would mean the focus would be shifted to Iraq, particularly to Iraq's Sinjar and Tal Afar. "This is what the PKK foresees and thus why it has also intensified its attacks against Turkey."

The PYD/PKK has aimed at establishing a self-declared autonomous canton from Syria's northwestern Afrin to Kobani and Jazeera cantons in the northeast, which moderate opposition groups have opposed as it threatens Syria's territorial integrity. Due to organic organizational links between the PKK and the PYD, Turkey also sees the PYD as a terrorist establishment in its borders, which Ankara has said numerous times it will not allow.

Meanwhile, Yeni Birlik newspaper columnist Avni Özgürel said that many of Turkey's internal problems also have international dimensions. "Many of the events, beginning with the 1960s or even earlier, are related to Turkey's political attitude towards international developments. Recent developments are also of the same nature, particularly due to Turkey's policies on Syria and Iraq, which have conflicted with the U.S.'s interests in the region," Özgürel said, adding that the U.S.'s partnership, military and logistical support with the PYD in Syria, despite Turkey's concerns, has encouraged the PKK terror group to carry out attacks against Turkey, the U.S.'s historic NATO ally. Özgürel added that the recent attacks cannot be understood fully unless the international supporters of the PKK terror group are exposed.

On Saturday, a PKK suicide car bombing targeted a bus carrying soldiers in the central Kayseri province, killing 14 and injuring more than 50 others. On Dec. 10, the PKK affiliated TAK (Kurdistan Freedom Falcons) targeted a police shuttle in Istanbul's Beşiktaş district, killing 44 people, including eight civilians and injuring over 150 others.

The PKK, which is also listed as a terrorist organization by the U.S. and the EU, resumed its 30-year armed campaign against the Turkish state in July 2015.
Last Update: Dec 19, 2016 2:13 am
RELATED TOPICS