After being weakened by security ops, PKK clings on to suicide attacks to spread terror 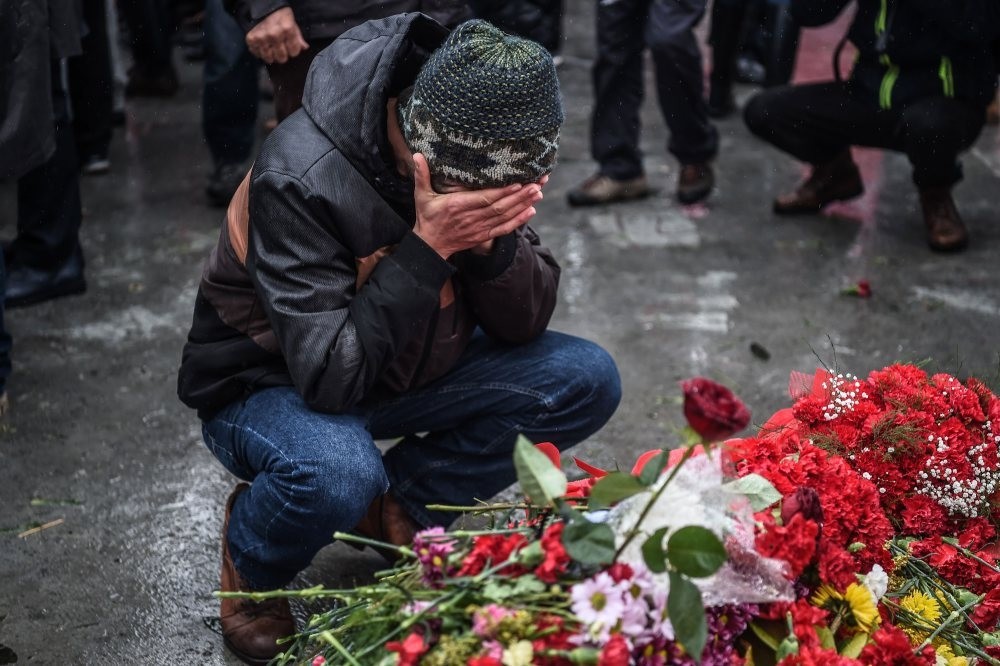 A man reacts at the site of an explosion where flowers where placed for the victims of the Dec. 10 blasts in Istanbul, claimed by the Tak.
by Mustafa Kırıkçıoğlu Dec 24, 2016 12:00 am

The PKK began to use its splinter group the TAK to carry out suicide attacks inside cities as a last resort, after its strategy to move the war into urban areas failed due to successful anti-terror operations and a lack of support from Kurdish people in the region

When Turkey's southwestern touristic Kuşadası and Marmaris districts were targeted by terrorist attacks in 2005 and 2006, respectively, most of the Turkish people heard for the first time the name of the Kurdistan Freedom Falcons (TAK), a splinter group of the PKK terrorist organization. In the course of time until February 2016, the TAK's name was involved in a few more terrorist attacks that mostly targeted civilians and tourists, however, the Turkish public became familiar with its name after their bomb attack in Ankara on Feb. 28, 2016, which killed 29 people and wounded 81 others.

Now, it's well-known that the TAK is nothing more than a splinter group managed by the PKK to acquit itself and the terrorist organization's Syrian offshoot the Democratic Union Party (PYD), from its suicide attacks and car bombs against civilians and tourists. The TAK see Abdullah Öcalan, the leader of the PKK terrorist group who is serving a life term at the İmralı Prison Island in northwestern Turkey, as its leader too.

The TAK's increased attacks have given hints about the PKK's new strategy, which is not to discriminate against civilians or military forces when determining their targets for attacks. The terrorist organization, whose attempts to bring the war to urban areas collapsed due to the successful counterterror operations and a lack of cooperation from the people in the southeastern region, is now using suicide bombers to spread terror. For a couple of months, the PKK also started to assassinate political figures, district heads of political parties - most of them Kurdish politicians - in southeastern Turkey, who refuse to adhere to their policies.

Recent suicide attacks have hit Istanbul and Kayseri, which in total claimed more than 50 lives, clear evidence of this strategy. The TAK carried out seven attacks in different cities in Turkey in 2016 and targeted a bus-stop, off-duty military personnel, civilians, tourists, a mosque and even forests by deliberately setting fires. The death tolls on these attacks have reached more than 150. The PKK's splinter group vows to continue its attacks and gear up its "bitter struggle" against the Turkish state in its declaration on Dec. 20.

PKK leader Murat Karayılan on Monday went one step further and threatened Turkish politicians with suicide bomb attacks while acknowledging the presence of a "battalion" established solely for this purpose. "The Battalion of Immortals is fedayeen [Arabic word meaning 'those who sacrifice themselves'] forces that are always active in the form of sleeper cells," he said to the PKK-affiliated Fırat News Agency (ANF).

"Turkey should take both intelligence and military measures in order to prevent such attacks. Not just domestic, but foreign intelligence is vital, since the PKK has a large movement area in the northern Syria and functioning under the guise of other organizations such as the Democratic Union Party (PYD)," said Murat Yeşiltaş, the director of Security Studies at Ankara's Foundation for Political, Economic and Social Research (SETA), to Daily Sabah.

He underscored that Turkey should define northern Syria as a "military fighting area," to prevent menacing threats coming to the country from the region. "The U.S. weapons given to the PKK's offshoot such as the PYD and the People's Protection Units (YPG) are being used on our soil. Turkey should spread its military campaign to northern Syria, and should seek political solutions to the issue on the other hand. Trump's government can be a new chance for a solution to the issue," he said.

Intelligence sources confirmed that both suspects of the suicide bombers of the Istanbul and Kayseri attacks entered Turkey from the PYD-controlled area in northern Syria, after being trained in the PKK camps there. This situation again revealed the danger that comes from the terror corridor established by the PKK in the region. The People's Protection Units (YPG), which is the military wing of the PYD, had previously threatened Turkey with terror attacks with a video released in February of this year where the group declared war on Turkey.

"Now, the PKK is not an organization only seeking to claim soil from Turkey for declaring independence by waging a war in the mountains, it has become a tool that is used in ongoing proxy wars on the whole region," told Abdullah Ağar, a retired military officer and security specialist, to Daily Sabah.

"As some of the Turkish politicians referred, Turkey is in a kind of 'war of independence'."

Ağar underscored that the powers who have been trying to shape the geography and carrying out non-linear war patronize the PKK. "This support of big powers encourages the terrorist organization in their actions," he concluded.
RELATED TOPICS