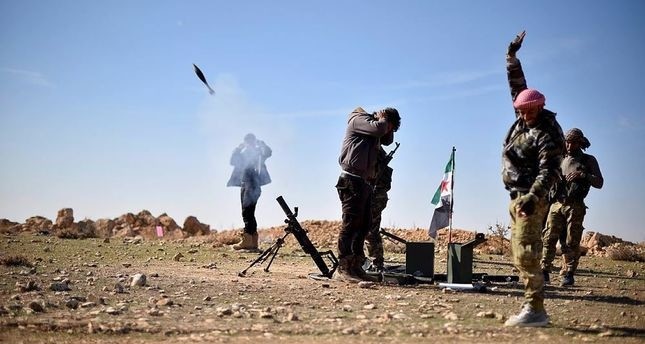 Free Syrian Army fighters are seen in the photo during an offensive around al-Bab. The opposition army, in cooperation with the Turkish military, is close to liberating the town from Daesh militants
by Daily Sabah Dec 26, 2016 12:00 am

As the Turkish-backed Free Syrian Army (FSA) closes in on the Daesh-held town of al-Bab in northern Syria, another key town, Manbij, currently controlled by the PKK's Syrian offshoot, the Democratic Union Party (PYD), has emerged as the advancing forces' next target. Turkish-backed FSA fighters have been knocking on al-Bab's doors for quite a while now. However, the liberation of the town was delayed by concerns for the civilians living there until finally last week, with the causes for concern resolved, the army launched an offensive to liberate al-Bab from Daesh terrorists.

The Turkish Armed Forces (TSK) yesterday said a total of 140 Daesh targets, including a military headquarters, were destroyed on Saturday as part of Operation Euphrates Shield. Saturday marked the 123rd day of the operation, which was launched on Aug. 24. With the FSA nearing a complete liberation of al-Bab with the help of the Turkish military, Ankara seems to have set its sights on the PYD-held Manbij. President Recep Tayyip Erdoğan on Saturday said the FSA fighters will march towards Manbij once the liberation of al-Bab has been secured. "Turkey will never allow the formation of a new state in northern Syria," reaffirmed Erdoğan, speaking at Turkey's Foreign Economic Relations Board (DEİK) in Istanbul.

In November, Erdoğan had hinted at the possibility of an offensive against the PYD's armed wing, the People's Protection Units (YPG), in Manbij. "It [the liberation of al-Bab] is not enough. We will march toward Manbij. Why? Because the YPG is there," Erdoğan said.

Since the launch of Operation Euphrates Shield, Turkish explosive ordnance disposal teams have destroyed 2,261 handmade explosives and 42 mines in areas liberated from Daesh.

Located 30 kilometers from the Turkish border, al-Bab used to be home to around 64,000 people, mainly Sunni Arabs, before the Syrian civil war erupted in 2011.

The terror-free corridor will ensure security for Turkey's southern border with Syria, while also providing a safe shelter for locals in the region, which would stop the mass influx of refugees coming into Turkey.

The operation is also meant to keep the town safe from Assad regime forces and PKK/PYD terrorists, who seek to create a "state" in northern Syria.

The PKK/PYD's failure to capture al-Bab means that it will not be able to connect Manbij, on the west banks of the Euphrates with Afrin near the Turkish border.

The PYD/PKK aimed to establish a self-declared autonomous canton from Syria's northwestern Afrin to Kobani and Jazeera cantons in the northeast, which moderate opposition groups have opposed because it threatens Syria's territorial integrity.

Ankara considers the YPG a terror group, as an offshoot of the outlawed PKK, which itself is listed as a terror organization by the U.S., Turkey and the EU.

Turkey has voiced its concerns over the YPG moving into Manbij, which has a predominantly Arab population. Turkey has also warned against the YPG's aim to create demographic changes in areas captured from Daesh.

Meanwhile, the YPG presence has become a matter of political friction between Ankara and Washington. Ankara argues that U.S. support of the Syrian Democratic Forces (SDF), predominantly led by the YPG, is eventually transferred to the PKK and ultimately used against Turkey.

Despite Ankara's repeated warnings to the YPG and its allies the U.S. that all YPG forces should withdraw from Manbij and move east of the Euphrates, the terrorist group has remained in the town and even marched westwards to al-Bab.
Last Update: Dec 26, 2016 12:21 pm
RELATED TOPICS