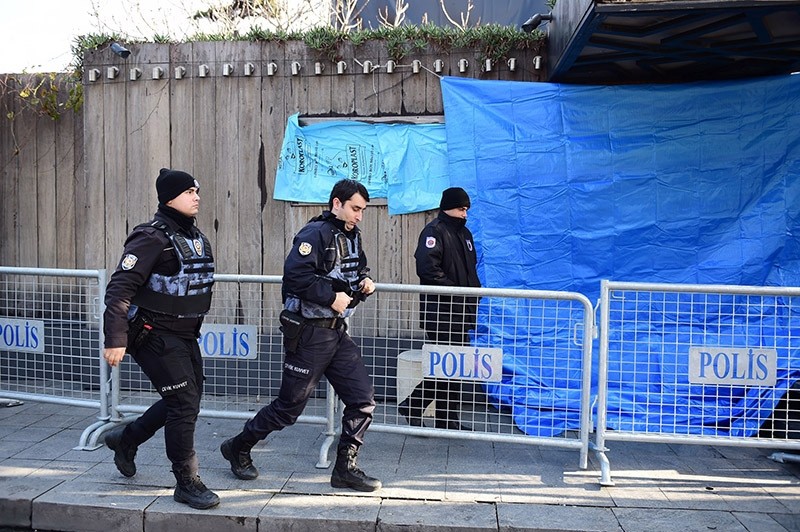 Turkish anti riot police officers stand guard near the Reina night club early on January 1, 2017 after at least one gunmen went on a shooting rampage in the nightclub during New Year's Eve celebrations. (AFP Photo)
by Daily Sabah with Wires Jan 01, 2017 12:00 am

Turkish police forces continue with the manhunt for the assailant who opened fire at a nightclub in Istanbul during New Year's celebrations on Sunday, killing 39 people and wounding 65 before escaping.

The attacker, armed with a long-barreled weapon, killed a policeman and a civilian outside Istanbul's popular Reina club at around 1:15 a.m. before entering and firing on people partying inside, Gov. Vasip Şahin said.

"Unfortunately (he) rained bullets in a very cruel and merciless way on innocent people who were there to celebrate New Year's and have fun," Şahin told reporters.

Interior Minister Süleyman Soylu said the attacker has not been identified and is still at large. "Our security forces have started the necessary operations. God willing he will be caught in a short period of time," he said.

'We know of an armed terrorist," Prime Minister Binali Yıldırım said on Sunday. The authorities are working non-stop to uncover the identity of the attacker with an extensive manhunt under way, he stated.

The attacker could have left his weapon in the club and mingled with the fleeing crowds to make his escape. All possibilities are being examined, Yıldırım added.

President Recep Tayyip Erdogan vehemently condemned "the terror attack in Istanbul's Ortaköy neighborhood in the first hours of 2017" and offered condolences for those who lost their lives, including "foreign guests."

There was no immediate claim of responsibility for the attack and authorities did not name any suspects. The bloodiest attacks that Turkey endured in 2016 were the work of Daesh or PKK.

Speaking on Sunday, Deputy Prime Minister Numan Kurtulmuş said that there are apparent evidences but it is too early to say that a particular terrorist group had carried out the attack.