Turkish military, FSA have killed over 1,000 Daesh terrorists including a senior figure since Aug. 24 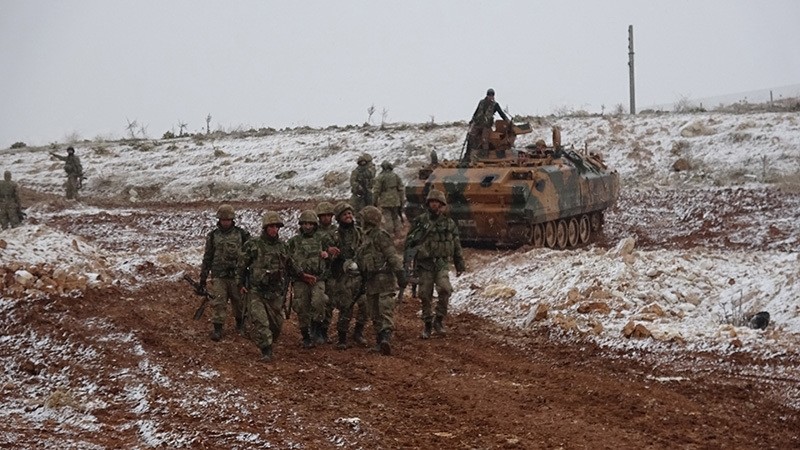 Defense Minister Fikri Işık told Parliament on Thursday that a nearly 2,000-square-kilometer area has been cleared of the Daesh terror group by the Turkish military and the Free Syrian Army (FSA) and over 1,000 terrorists have been killed in northern Syria since the launch of Operation Euphrates Shield. In Turkish counterterror operations in Syria, a high-ranking terrorist of the group, Abu Ansari was also killed.

Highlighting that Operation Euphrates Shield is moving forward in line with international law, Işık said: "The liberation of Jarablus, al-Rai, and Dabiq, which has a symbolic meaning for the group, is significant. An area of about 2,000-square-kilometers has been cleared off, and 225 urbanized areas have been liberated. As of today, 1,005 terrorists have been killed." Işık added that 29 mortars, 97 vehicles, 621 buildings and 61 defense positions belonging to the group have been destroyed so far.

Turkish army and the FSA have also killed 391 Daesh terrorists since the start of an offensive to liberate the significant northern Syrian town of al-Bab from the terrorist group.

The Turkish Armed Forces (TSK) informed that the military hit more than 2,700 Daesh targets in the al-Bab offensive, both on the ground and from the air. A senior Daesh terrorist figure, Abu Ansari was also killed by Turkish airstrikes in northern Syria, the military noted.

The military hit Daesh headquarters, depots, warehouses and defense positions in the operation. In addition, many suicide-bombing vehicles, 400 handmade explosives and three landmines were destroyed.

So far, 24 opposition fighters have been killed in clashes and 157 have been wounded.

Meanwhile, reports in Turkish media outlets claimed on Thursday that, for the first time, Russia targeted Daesh positions in Syria's al-Bab in airstrikes on Wednesday, as Turkey is carrying out Operation Euphrates Shield to clean terrorists out from the region.

According to reports, Russian jets hit Daesh targets located in southern al-Bab, while Turkey is focusing on the central region.

Operation Euphrates Shield was launched on Aug. 24 by the Turkish military and the FSA. The operation aims to create a terror-free zone in Syria, namely a 5,000-square-kilometer (1,930-square-mile) area. Following the liberation of al-Bab, Ankara wants to expand the operation towards Manbij, where the PKK's Syrian offshoot, the Democratic Union Party (PYD) is in control.