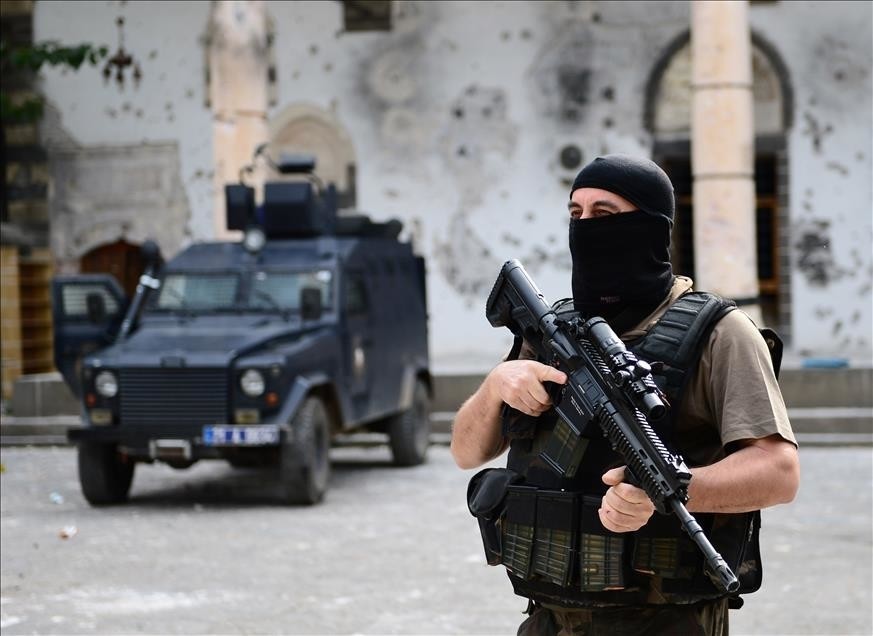 As Turkey tackled with several terror groups simultaneously in 2016, its new ‘offensive' counterterror strategy will aim to minimize PKK, Daesh and DHKP-C terror threats in the new year, both domestically and in its cross-border operations

As Turkey leaves behind a year with more than a dozen major terrorist attacks, most of which were carried out by the PKK terrorist organization, and its affiliate groups, as well as the Daesh terror group, its offensive counterterrorism strategy, which was more explicitly employed in 2016, is expected to continue in 2017 to target terrorist groups at their sources before they are able to carry out the attacks.

In 2016, Turkey fell victim to 18 major terror attacks, most of which were carried out by the PKK, its affiliate group, the Kurdistan Freedom Falcons (TAK), and Daesh. In addition to its fight against the PKK and Daesh, Turkey has also, simultaneously, put forward a strong fight against the Revolutionary People's Liberation Party-Front (DHKP-C), as well as the Gülenist Terror Group (FETÖ) which carried out the July 15 coup attempt.

In its fight against the PKK terror group and its affiliates, Ankara employed a distinct three-level strategy, which included zero tolerance for terrorism in the southeast, establishing and maintaining consultation with all the Kurds in the region, as well as targeting the group's bases in northern Iraq, including the Qandil Mountains where the PKK has set up its command-and-control camps.

The new phase of its anti-PKK strategy was hinted out by President Recep Tayyip Erdoğan during a visit to Turkey's southeastern Diyarbakır province following a PKK attack in the village of Dürümlü in Diyarbakır's Sur district on May 12, which left 16 dead, including 13 civilians and 23 others injured.

The zero tolerance to terrorism measure was particularly felt in operations launched against the PKK's aim to bring chaos into southeastern provinces through urban warfare.

PKK terrorists had employed a strategy to carry its war against the state from the mountains to the cities in the southeast, which was particularly felt in Diyarbakır's Sur and Silvan districts, Mardin's Nusaybin district, Şırnak province's Cizre and Silopi districts, as well Hakkari province's Yüksekova district.

However, through a successful and firm stance by the government and security forces, they have been eliminated from urban areas.

Moreover, the government's firm stance against terror was also supported by the people in the region, who turned down, for the most part, the group's call to rebel and rise against the state.

In addition, the government's new step to include a diverse group of Kurdish actors from the region in support of its fight against the PKK, was also welcomed by the people in the region.

Meanwhile, the Turkish military continued carrying out airstrikes, which aimed to eliminate the group's logistical and training facilities as well as militants in camps in northern Iraq.

In 2017, the government is expected to continue its offensive against the PKK locally and in its cross-border operations, which may include an expansion of cross-border operations into northern Iraq, to fight PKK targets, including the Qandil Mountains and Sinjar, in addition to the expansion of Operation Euphrates Shield into areas held by the PKK's Syrian offshoot, the PYD, in northern Syria.

In his recent speeches, Interior Minister Süleyman Soylu has particularly voiced that 2017 will be the worst year yet for the PKK.

"I say clearly that these are their good days. After April, they will be surprised to see what is happening to them, as their end will come soon. We will decisively continue our fight during the winter," Interior Minister Soylu said on Dec. 8, during his visit to the eastern Van province.

On Dec. 24, Soylu also said that the PKK leadership in Qandil will not be able to take shelter in the mountains anymore and will "look for a place to hide."

"I say to those in Qandil, 'You will not survive until the spring. You will not able to stay there and threaten Turkey.' Daesh did the same thing, they threatened our borders. But now, our military forces are making great efforts there [in al-Bab]. In the past, we first waited to be attacked to defend ourselves. There is no such option anymore. Now, we are on the offensive against all kinds of terrorism, as our president and prime minister instructed," Soylu stated.

According to sources, Ankara is also expected to enhance its use of advanced technology in its fight against the terrorist group, particularly the armed drones and other advanced weaponry. The recent measures taken against the individuals making terror propaganda on social media is also expected to continue in the new year as part of the zero-tolerance to terrorism measures.

While the PKK is recognized as a terror organization by Turkey, the U.S. and EU, ineffective policies against the terror group by European politicians have also added to the diplomatic tension between Turkey and some EU member states, which is expected to continue, unless the EU moves from a rhetorical-only position against the PKK to one that will be matched with actions and concrete measures against the group.

Ankara has long criticized EU member states for being tolerant to activities of PKK sympathizers across European cities.

On the other hand, Turkey's determined stance against the Daesh terror group is also expected to be one of the first priorities in Ankara's security agenda.

While Ankara's fight against the Daesh terror group led to the launch of the cross-border Operation Euphrates Shield on Aug. 24 into northern Syria, security forces also carried out countless anti-Daesh raids across the country, in addition to tightening security measures at its borders, arresting hundreds of suspected militants of the group.

According to official sources, through intelligence sharing with other countries, Turkey added more than 16,000 suspects to its no-entry list in 2016.

Meanwhile, nearly 4,000 foreign terrorist fighters have been deported from Turkey after the successful operations by the security forces.

According to Interior Ministry figures, in 2016, security forces detained 3,359 suspects, while 1,313 of them, including 679 foreign nationals, were arrested due to links to the terrorist group. The ministry has also said that between 2011 and 2016 a total of 7,015 people, including 2, 712 foreign nationals were arrested for their links to Daesh, with 2,304 taken into custody.

Although Turkey has long been taking security measures against Daesh domestically, the fight against the terrorist group in cross-border combat was found necessary, particularly as Daesh fired numerous rockets into Turkey's southern border province of Kilis at various times and after a Daesh suicide attack in Turkey's southern Gaziantep province on Aug. 20, which killed 54 people, and injured 95 others.

The launch of the cross-border operation was part of Turkey's new aim to eliminate terror threats posed to the country's national security before they are able to carry out the attacks.

As such, through successful operations, Turkey has managed to push away the Daesh threat from its southern border to a range which the terror group's missiles would not be able to reach the country.

In the new year, both Daesh and the PKK will be facing harsher responses from security forces due to Turkey's offensive strategy both domestically and in its cross-border operations.

Jan. 12 – Istanbul, Sultanahmet attack: A 28-year-old Daesh terrorist group member carried out a suicide attack in Istanbul's Sultanahmet Square, killing 13 German tourists and injuring 16 others, including 11 foreign nationals.
Jan. 14 – Diyarbakır, Çınar district attack: PKK terrorists attacked police department buildings, including residential buildings for the police, in a car bombing, which killed six people, including two babies, and injured 39 others.
Feb. 17 – Ankara attack: PKK-affiliated Kurdistan Freedom Falcons (TAK) terrorists attacked a Turkish Armed Forces (TSK) shuttle bus with a car bombing, in which 29 people were killed, including civilians, and 61 others were injured. Officials drew attention to the People's Protection Units (YPG) links in the attack.
March 13 – Ankara attack (Kızılay district): The PKK carried out a car bombing near Güvenpark in the district of Kızılay, killing 37 civilians and injuring 125 others.
March 19 – Istanbul, İstiklal Avenue: A Daesh terrorist detonated explosives on his body, injuring 36 and killing five.
May 1 – Gaziantep: A Daesh car bomb attack killed two police officers and injured 40 outside Gaziantep Police Headquarters.
May 10 – Diyarbakır: A PKK attack on a police bus left three people dead, while injuring 45 others in the Bağlar district of Diyarbakır.
May 12 – Diyarbakır, Dürümlü: Sixteen people were killed and 23 were injured after PKK terrorists detonated a truck loaded with 15 tons of explosives in the Dürümlü village of Sur district in Diyarbakır.
June 7 – Istanbul, Vezneciler: The PKK-affiliated TAK terrorists carried out a car bomb attack that left 11 people dead, including seven police officers, and injured 36 others.
June 8 – Mardin: PKK terrorists detonated a car bomb nearby police headquarters in Mardin's Midyat district, which killed five people, including two policewomen, one of whom was pregnant, and three civilians. Thirty-four others were wounded in the attack.
June 28 – Istanbul, Atatürk International Airport: Four Daesh terrorists carried out an attack at Istanbul's Atatürk International Airport, killing 35 and injuring more than 100 people. Two out of the four attackers were suicide bombers.
Aug. 20 – Gaziantep: A Daesh terrorist, who was reportedly a young boy suicide bomber between the ages of 12 and 14, targeted a wedding in the Gaziantep province, killing 54 people and injuring many others.
Aug. 26 – Cizre, Şırnak: The PKK carried out an attack against a police station in Şırnak's Cizre district, during which 13 people were killed, while 78 others were injured.
Oct. 9 – Şemdinli, Hakkari: PKK terrorists attacked a security forces' post in the southeastern Şemdinli district of Hakkari province, killing 18 people and injuring 26 others.
Dec. 10 – Maçka Park, Istanbul: PKK-affiliated TAK terrorists carried out a car bombing on a police shuttle bus, killing 44 people and wounding 155.
Dec. 17 – Kayseri: A suicide car bomb attack hit a public bus in the central Anatolian city of Kayseri, killing 14 soldiers and wounding 55 others.
Last Update: Jan 02, 2017 9:05 am
RELATED TOPICS