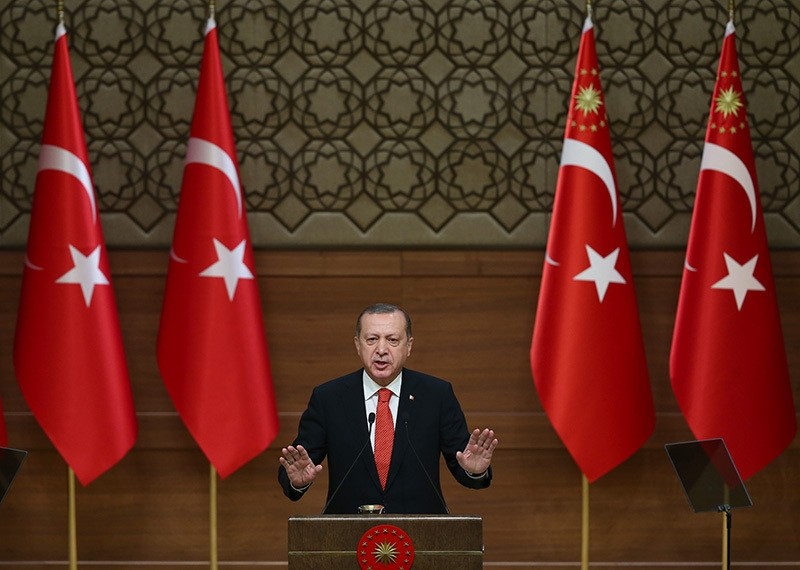 | AA Photo
by daily sabah Jan 04, 2017 12:00 am
Amid speculations in Western media outlets that the terrorist attack targeting a nightclub in Istanbul in the early hours of the new year actually targeted people's way of life, President Recep Tayyip Erdoğan said Wednesday that there is "No systematic threat to anyone's lifestyle in Turkey."

Speaking at the Presidential Compound in capital Ankara, President Erdoğan said that the Turkish state is aware of its responsibilities and ensured that there is no specific threat to people's lifestyles in the country.

Some Western media outlets have already contended that the way of life of Turkey's secular circles are under attack, pointing to the recent nightclub attack. President Erdoğan rebuked these claims, saying that those who put forward such contentions should prove their solvency: "It does nothing but confuse people's minds to make comments about people's lifestyles," he said.

In addition, some opposition circles in Turkey have claimed that the attack by the terrorist group was actually against the secular way of life, adding that the secular lifestyle is under threat. However, the public remains united in the face of the recent terrorist attack.

At least 39 people, including a police officer, died after an attacker opened fire on partygoers at the entertainment venue in Istanbul's Ortaköy area. Sixty-nine people were also injured, with a number of foreigners among the dead and injured.

Over the course of the attack the Daesh gunman changed six chargers and fired over 180 bullets, according to an investigation. The suspect went upstairs after entering Reina nightclub and started firing on revelers before going downstairs to continue shooting.

According to witnesses, he also shot people lying on the ground in the head. The attack reportedly lasted for seven minutes. The Daesh terror group claimed the attack on Monday.

President Erdoğan asserted that such speculations and claims regarding the lifestyles of people in Turkey aim to polarize society: "I know that there is no obligation for anyone in our country and the world to have the same lifestyle," he said, adding that respect for people's way of living is reciprocal.

According to information in the Turkish media, the three families traveled to İzmir from Anatolian Konya province.

Turkish authorities have identified the Istanbul nightclub attacker, Foreign Minister Mevlüt Çavuşoğlu said yesterday. Speaking on Anadolu Agency's (AA) Editor's Desk, Çavuşoğlu said that the identity of the terrorist has been discovered but did not name him or share more details.

The suspected assailant allegedly came to Istanbul with his wife and two children to avoid suspicion regarding his ties to terrorism. During her testimony after being detained, the wife had said that she was not even aware of her husband's "affinity" toward the Daesh terrorist group.
Last Update: Jan 05, 2017 9:57 am
RELATED TOPICS