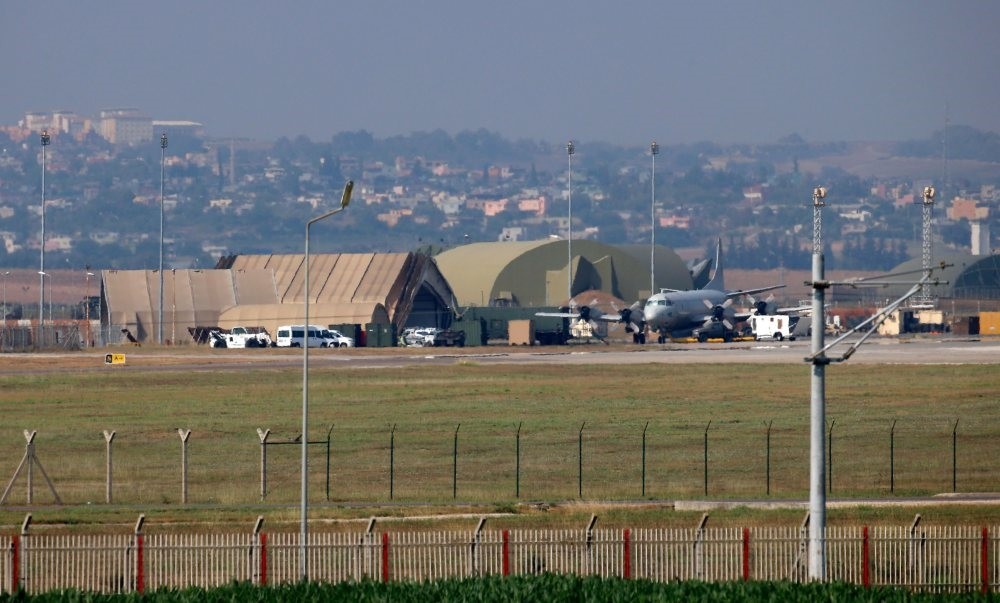 This file photo taken on July 28, 2015 shows a military aircraft on the runway at Incirlik Air Base, in the outskirts of the city of Adana, southeastern Turkey. (AFP Photo)
by daily sabah Jan 07, 2017 12:00 am

A recent National Defense Ministry report reveals links between the İncirlik airbase and putschist F-16 pilots, saying warplanes involved in the coup attempt, flew alongside tanker aircraft from İncirlik that was used for refueling the F-16s

According to the recently submitted report by National Defense Ministry to the Parliamentary Investigation Committee, the F-16 warplanes involved in the failed July 15 coup attempt flew together with the tanker aircraft that took off from İncirlik Air Base and may have been used for the refueling of the F-16s.

As the details included in the report were mentioned shortly after the coup attempt, the Parliamentary Investigation Committee was established following the failed July 15 coup attempt in efforts to further look into the incident and claims emerged after the attempt. On that note, the report provided by the Defense Ministry included the air traffic on the night of July 15 that affirmed the F-16s that bombarded the Presidential Palace, Parliament as well as that the Special Forces Command were in contact with the tanker aircraft that lifted off from İncirlik Air Base. The report signed by National Defense Minister Fikri Işık, further stated that the tanker aircraft detected at 9:53 p.m. on July 15 under the code name "Asena 01" was followed on the radar until 5:28 a.m. July 16. "The group of aircraft that are suspected to be the F-16s, flew close to tanker aircraft on July 16 during 3:10-3:27 [a.m.], 4:00-4:17 [a.m.] and 4:48-5:05 [a.m.] and continued to fly together with the tanker aircraft for nearly 16-17 minutes," report stated.

Furthermore, the tanker aircraft detected at 9:50 p.m. on the night of the coup attempt under the code name "Asena 02" was followed on the radar screen until 5:28 a.m. on July 16 and was detected flying together with the group of F-16 warplanes as well according to the ministry's report. According to the report underlining that another tanker aircraft from İncirlik Air Base with the code name "Asena 03," which was also flying along with the group of F-16 warplanes during the times of 5:24 a.m. and 5:33 a.m. July 16 further said, "though there is no definite evidence of refueling activity during the approach of tanker aircraft on July 16, it has been considered that a refueling activity was conducted in the air when the times of the tanker aircraft and F-16s together were taken into account.

"Despite the warnings made from the Joint Force Air Component (JFAC) Command's emergency call frequency to the ASENA tanker aircraft and the approaching aircraft traffic informing them 'military traffic that took off without JFAC's command, immediately RTB (return to base) to your takeoff positions otherwise you are to be engaged' the pilots continued their activities regardless of cautions," the National Defense Ministry report added.

Meanwhile, the information from the report on İncirlik Air Base activity was previously mentioned following the July 15 coup attempt as a senior official speaking on the condition of anonymity previously said the Turkish commander of the base was detained over complicity in the matter. Also Foreign Minister Mevlüt Çavuşoğlu said in July some troops at İncirlik Air Base were involved in the attempted coup. The air space around Incirlik was closed during the attempted coup over the above mentioned concerns regarding F-16s. The air space around the base quickly reopened in the days after the attempted coup so that U.S. warplanes involved in the fight against Daesh militants in Iraq and Syria could continue their operations.

Additionally to the National Defense Ministry's report on İncirlik's Air Base tanker aircraft's likely involvement in the coup attempt, Minister Işık speaking in a televised interview yesterday said, "İnclirlik Air Base is not something to be closed immediately as it is not a NATO air base as well." Having ignored Ankara's repeated warnings against its continuous support to the PKK's Syrian offshoot the Democratic Union Party (PYD) and its armed wing the People's Protection Units (YPG), Washington now faces the threat of the closing of İncirlik Air Base. Minister Işık said, "They are there with Turkey's permission and if Turkey perceives that its national interests are at stake then it will consider closing down the air base. However, we are in contact with our colleagues as we expect sincerity from the U.S. and other countries." While affirming that Turkey is to continue its discussions until the end regarding the İncirlik matter, Işık stressed that "Turkey has the last say."

Prior to Minister Işık speaking, Presidential spokesman İbrahim Kalın said on Thursday the current strategy of the U.S., which concentrates on the YPG in the fight against Daesh, is not right, asserting that "Turkey has the right to shut down İncirlik Air Base. We always have this right. However, as I said, first the conditions should be evaluated. We have the right of ownership as part of Turkey's sovereignty." In response to the Turkish officials' remarks, Pentagon spokesman John Dorrian said the İncirlik Air Base is priceless for the U.S. as Dorrian also said, "the U.S. and the U.S.-led coalition against Daesh are grateful for allowing the access to İncirlik and hoping for its continuation."
RELATED TOPICS