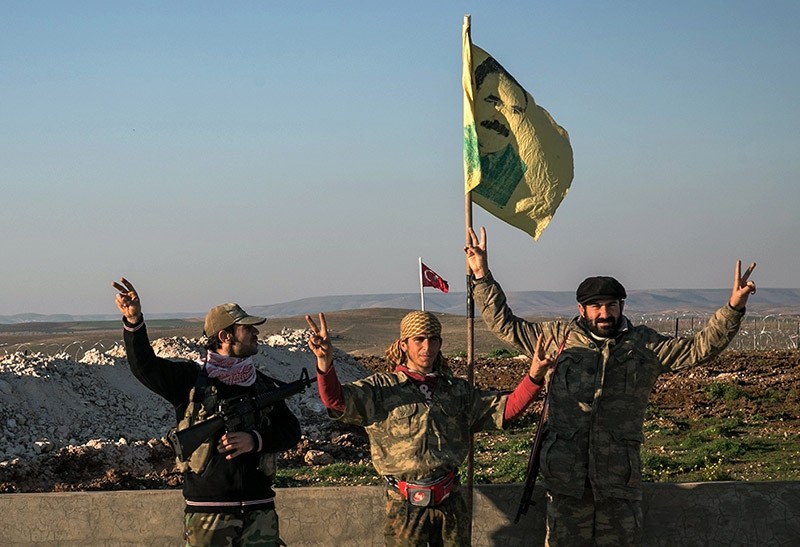 In this file photo, YPG members make a V-sign next to a drawing of Abdullah u00d6calan, jailed PKK leader, in Ashmeh village in Aleppo province, Syria. (AP Photo)
by Daily Sabah Jan 08, 2017 12:00 am

Terrorist PKK's Syrian offshoot, the People's Protection Units (YPG), is training recruits in northern Syria in the Marxist-Leninist inspired ideology of PKK with the support of the U.S.

The Arab recruits are allegedly prepared to be deployed against the Daesh terror group.

However, the U.S.-backed YPG terrorists set the conditions for all recruits to learn and embrace the PKK ideology prior to their integration to the ranks of the terrorist group.

Witnesses who take part in the ideological trainings of YPG terrorists report that recruits are educated into believing that state should not exist, and exist to serve as an instrument for ''oppressors.''

YPG enjoys strong U.S. support and has overrun large swathes of northern Syria over the last two years, even going far beyond the traditionally Kurdish-majority regions.

In an effort to counter the Turkish protestations, the U.S. military supplies weapons to YPG terrorists through an umbrella organization called the Syrian Democratic Forces (SDF), which is made up of and controlled mostly by YPG, but also integrating some moderate Arab groups from the Syrian opposition.

The Washington Post reports that U.S. military advisors, despite acknowledging that the YPG elements constitute more than three-quarters of the SDF, declined to comment on the PKK-inspired ideological trainings given by YPG to the new recruits.

"The military support has boosted the YPG's confidence to move beyond Kurdish populated areas and grow their ambitions even beyond Syria," Maria Fantappie of the International Crisis Group, who also highlighted that the YPG terrorists will start threatening the neighboring countries.

YPG terrorists explained several times their world view to foreign journalists visiting Syria, referring to it as ''democratic confederalism,'' which consists of abolishing the state and establishing self-governing communities in charge of their own affairs. They also highlighted that their ambitions go far beyond Syria or even the Middle East.

The U.S.-backed terrorist group is also decried as undemocratic by critics. YPG terrorists are known to be intolerant of dissent, and photographs of jailed PKK leader Abdullah Öcalan loom over town squares and other public places, similar to the cult of personality present in areas controlled by the Assad regime.

Syrian Kurds who support Kurdish parties that are opposed to the YPG have been jailed or driven into exile.

Turkish President Recep Tayyip Erdoğan and Prime Minister Binali Yıldırım have reiterated many times their concerns regarding the current Syrian policy of the Obama administration, warning that supporting a terrorist group [YPG] against another terrorist group [Daesh] is not the right method to fight terrorism.

Turkish officials called on U.S. President-elect Donald Trump, and the new U.S. administration to correct the pro-terrorist mistakes made by the Obama administration, and to be committed in the war on terror.