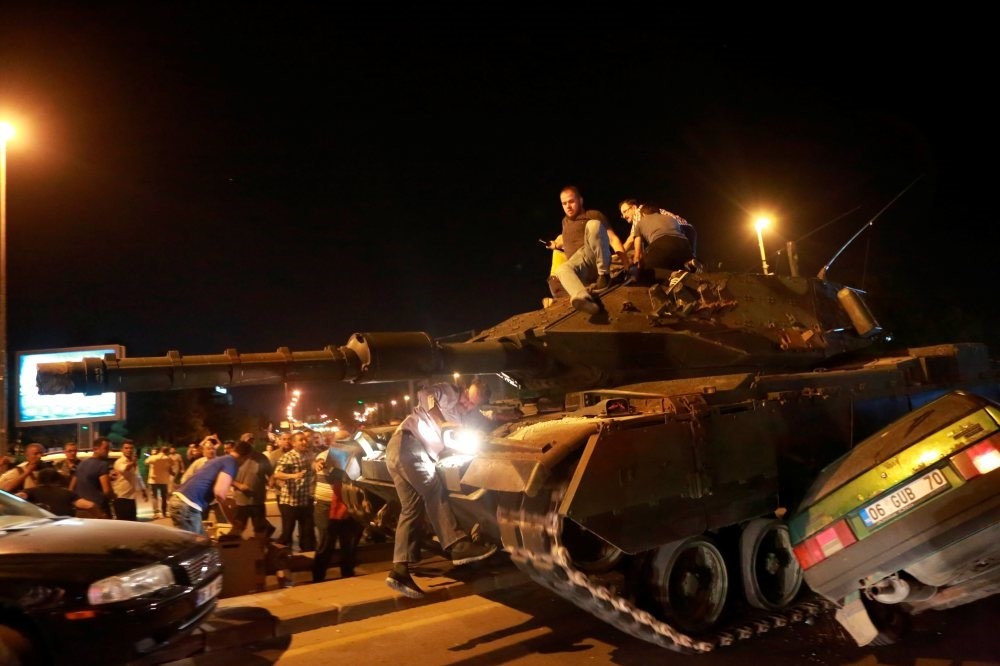 FETÖ notified its followers about the July 15 coup attempt months before officers linked to the terror cult tried to seize power, a secret witness in an investigation into the group claimed

In a veiled message otherwise comprehended by its members, the Gülenist Terror Group (FETÖ) urged its followers to be prepared for an upcoming coup, a secret witness in a criminal investigation claimed. FETÖ is being blamed for the July 15 coup attempt that was foiled in its eleventh hour by strong public resistance, efforts of police officers and anti-coup military officers.

The witness, code named "Ateş," testified that the terror cult used the encrypted messaging app Eagle to relay the information to members in May, Anadolu Agency reported.

The witness testified in an investigation on FETÖ in Kemalpaşa, a town in the western province of İzmir, where the group's leader Fetullah Gülen first came to prominence with his "sermons" in the 1960s.

Though the connection of "Ateş" to the cult has not been revealed, the witness is believed to be a former member of the terrorist group that has already been implicated in two other failed coups in 2013.

The testimony of the secret witness is part of an investigation into some 700 suspects with links to the terrorist group in the town and İzmir.

"Users of Eagle [in FETÖ] received two messages in May and June respectively. The first message read 'A huge earthquake will take place in Istanbul in July. Get dressed properly before you go to sleep.' The second one had links to two YouTube videos with one titled 'Veiled coup' and the other was about police officers arrested on Dec. 17-25," the secret witness said, referring to two coup attempts by FETÖ-linked police officers and judiciary in 2013 to implicate prominent figures close to the government in a graft probe.

The witness said FETÖ members acted carefully in order not to leave a trail of evidence behind them that could connect them to the group, used smartphone apps that blocked the detection of their location as well as phone signals and apps emitting signals from false locations.

The investigation in Kemalpaşa also focuses on threats made toward a senior bureaucrat. A FETÖ member is accused of telling the unnamed bureaucrat that he would not "stay in office too long" and "bright days are near" in a conversation that took place in May.

Although its members deny the cult planned and executed the coup, strong evidence emerging from the investigations showed they were actively involved in the coup plot.

Adil Öksüz, a senior figure of the terror cult, is accused of masterminding the coup with FETÖ followers in the Turkish Armed Forces. Öksüz and other key figures remain at large while the cult leader, Fetullah Gülen, refuses to return to Turkey from the United States, where he has resided since the early 2000s.

Several military officers captured after the putsch was quelled have confessed their ties to the terror cult. These include high-ranking officers who first joined the cult while they were cadets and then rose through the ranks quickly thanks to fellow cult members in the army helping their promotion.

The secret witness' statements are not the only evidence of Gülenists "foretelling" the coup. Osman Özsoy, a professor linked to FETÖ, has suggested a month before the coup attempt that "a divine hand would fix everything that is wrong in Turkey" and "not a single citizen would take the streets to protect democracy."

"The situation in Turkey cannot continue this way, but I will not say that the future of this country is dark. In fact, Turkey's future is unbelievably bright. The current period will soon come to an end," Özsoy said in a TV show, adding that he wished he had become a colonel instead of a professor so that he could "contribute [to the process]."

The testimonies from Gülenists in the bureaucracy who were detained after the July 15 putsch attempt points to a prevalent use of encrypted apps among FETÖ members.

Prosecutors say ByLock was popular among Gülenists for secret communications between 2013 and 2015, and after 2015, the terror cult turned to Eagle IM, which offers "256-bit end-to-end AES encryption" for its users, according to the app's description on the Google Play Store.

The app's developers also promise protection from "Man in the Middle" attacks or hacks into chats between two people that enable message altering by one of the two parties.

Similarly, ByLock offered an eight-digit password for users and highly secure encryption. Thousands of Gülenists using ByLock were detained or arrested following the coup attempt. The Turkish daily Milliyet reported Thursday that the National Intelligence Organization (MİT), which decoded the ByLock messages and prepared reports on its prevalence among FETÖ members, presented a new list of ByLock users to prosecutors. The list contains names of some 129,000 ByLock users active in the terror cult.

Some 50,000 civil servants among ByLock users are already being investigated for links to FETÖ and all names in the new list are from the public sector according to the Milliyet newspaper. The list also shows contacts of ByLock users tied to the terror cult.
Last Update: Jan 13, 2017 1:06 am