'Gülenopoly': Shady cult's crimes summarized in form of board game

'Gülenopoly' explains Fetullah Gülen's crimes, in possibly the most creative way. Calling the fugitive preacher the "Mula Mullah," the fictional board game also details the irregularities of FBI-probed charter schools run by the terror cult. The game also has a downfall for Gülen: his extradition

Denny Rehberg, the former Lieutenant Governor of Montana and U.S. Representative penned an article for U.S. daily The Hill regarding the Gülenist terror cult (FETÖ) and its effects on Turkish-American diplomatic relations. In the piece published on Friday, the Republican urged the U.S. government to extradite the fugitive preacher Fetullah Gülen to Turkey.

In the article, an unusual infographic was also featured. "Gulenopoly", apparently a parody of the famous board game Monopoly, was used to inform readers about the crimes and the July 15 coup attempt perpetrated by the shady cult. 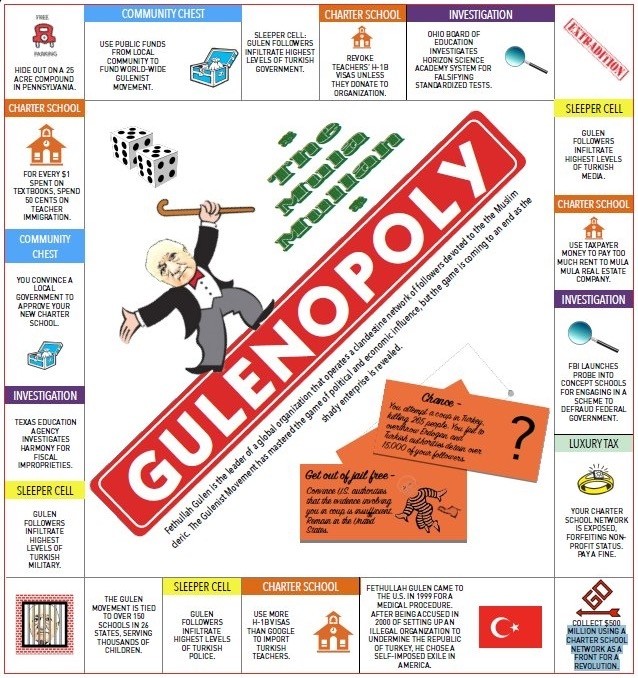 In the middle of the board game these words can be seen: "Fetullah Gülen is the leader of a global organization that operates a clandestine network of followers devoted to the Muslim cleric. The Gülenist Movement has mastered the game of political and economic influence, but the game is coming to an end as the shady enterprise is revealed."

The game also touches upon the cult's extensive use of charter schools in the U.S. The "Luxury Tax" space on the board reads: "Your charter school network is exposed. Forfeiting non-profit status. Pay a fine," explaining the possible outcome the cult will face should the U.S. government take concrete steps against his charter schools.

Investigations carried out against Gülen-linked schools can also be seen on the board. One of the "Investigation" spaces say "The Ohio Board of Education investigates Gülen-linked Horizon Science Academy for falsifying standardized tests" while another reads: "The Texas Education Agency investigates Harmony for fiscal improprieties". The Federal Bureau of Investigation's (FBI) probe was also included in the game via an "Investigation" space. "FBI launches probe into Concept Schools for engaging in a scheme to defraud federal government," the space reads.

Gülenopoly also details the FETÖ leader's past and his cult's infiltration activities and other crimes. "Fetullah Gülen came to the U.S. in 1999 for a medical procedure. After being accused in 2000 of setting up an illegal organisation to undermine the Republic of Turkey, he chose a self-imposed exile in America," the 'start' space says. The "GO" space - same as the one in the original Monopoly game - says "Collect 500 million dollars using a charter school network as a front for a revolution."

There are two cards depicted in the game, which refer to the Chance and Community Chest cards in the original game. The Chance card says: "You attempt a coup in Turkey - killing 248 people. You fail to overthrow Erdoğan, and Turkish authorities detain over 15.000 of your followers."

The game also includes the "Get out of jail free" card which says "Convince U.S authorities that the evidence involving you in coup is insufficient. Remain in the United States," implying that Gülen may get away with all of his crimes if he succeeds to persuade U.S. authorities that he is "innocent."

Gülenist terrorists embedded in the ranks of Turkish army tried to overthrow President Recep Tayyip Erdoğan's democratically elected government on July 15 coup attempt in 2016. As a result of the botched coup, 248 civilians were killed, and tens of thousands of Gülenist militants embedded in Turkish state's key institutions were either removed from their posts or jailed.