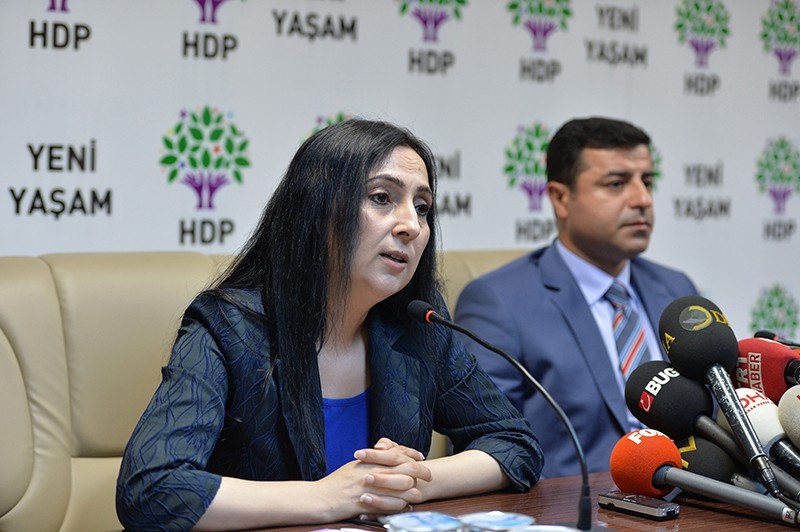 Diyarbakır Prosecutor's Office in charge of the terror probe involving co-chairs of the pro-PKK Peoples' Democratic Party (HDP) Selahattin Demirtaş and Figen Yüksekdağ, has demanded up to 142 and 83 years' prison sentences for the co-chairs respectively, reports said on Tuesday.

The prosecutor is seeking 43 to 142 years in prison for Demirtaş and 30 to 83 years for Yüksekdağ, who were arrested in November when they failed to bear testimony as part of the ongoing terror investigation, Anadolu Agency said.

The HDP has come under fire for its close links to the PKK terrorist organization. Members of the party have so far declined to call the PKK a "terrorist group," and attended the PKK militants' funerals, two of whom were the suicide bombers that killed tens of civilians in multiple bombings in Ankara.

Demirtaş has called for uprisings in the southeastern areas of Turkey many times. In an attempt to make Kurdish people in the region riot against the Turkish state in the face of terror operations against the PKK, Demirtaş attempted to call people to the streets. His calls have found little support.

Yüksekdağ has also drawn heavy criticism for her alleged pro-PKK stance with her remarks for a long time. "We lean our backs on the YPJ [Women's Protection Units], YPG [People's Protection Units] and the PYD [Democratic Union Party], and we do not see any harm in mentioning and defending it," she said in July 2015.

The PYD and its armed wing YPG are affiliated with the PKK. In addition, the two are reportedly commanded by PKK leaders. The capital city of Ankara was recently hit by a suicide bombing attack carried out by Abdülbaki Sömer, who fought in the YPG's ranks in Syria.

She praised the PKK and described it as "a national liberation movement and also an organization that stands for democracy and equality." A parliamentarian labeling an organization that targets security forces and civilians democratic and an advocate for equality drew ire in the public.