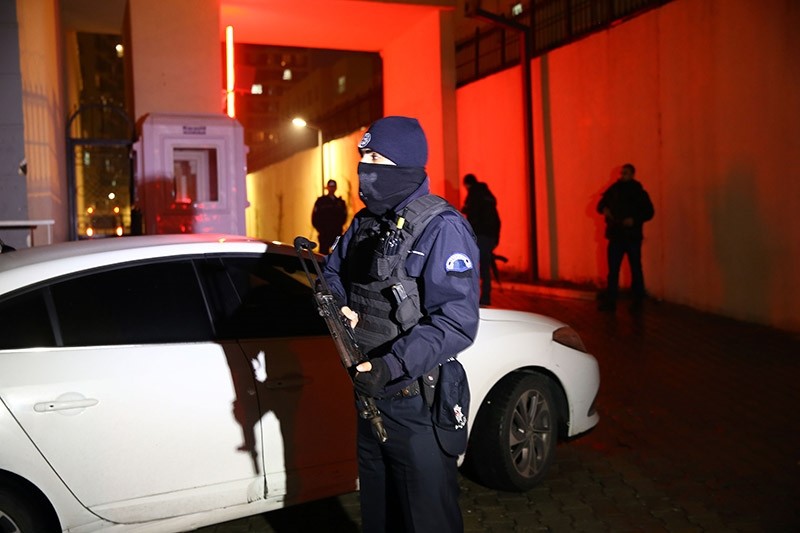 Police officers stand guard outside the site where Reina assaulter was hunted down, while other officers are investing inside. (AA Photo)
by Daily Sabah Jan 17, 2017 12:00 am

Details of the three-day operation carried out by the police to catch the Daesh-linked terrorist Abdulgadir Masharipov, who massacred 39 people in Istanbul's Reina nightclub on Jan. 1 at New Year's celebrations, surfaced on Tuesday.

The terrorist, known by his nom de guerre Abu Muhammed Khorasani, had been confirmed to have travelled from the Central Anatolian Turkish city of Konya to Istanbul on Dec. 16 by land, before carrying out the massacre at Reina nightclub early on Jan. 1.

After Turkish police officers, helped by the intelligence services, determined the route the terrorist used to get to Istanbul, a total of 152 houses were raided across Istanbul, Izmir and Konya.

168 suspected foreign terrorist fighters, and 50 Turkish citizens had been detained in these operations by the police since the Jan. 1 Reina shooting.

20 terror cells have been detected in the process. The police have received a total of 2,142 reports by citizens.

Police officers viewed over 7,200 hours of camera footage in the process of hunting the terrorist. More than 2,000 police officers took part in the operation.

Finally on Jan. 13, after the arrest of two suspects, police received hundreds of report calls.

Masharipov's communication with Daesh elements in Syria was determined and traces of the terrorists were found in Istanbul's Esenyurt district.

Subsequently, police units blockaded Esenyurt at several points before determining the house in which he was residing. Security forces followed Masharipov closely before launching the operation that caught him late on Monday, in an effort to identify his connections.

Three women and one male Iraqi citizen were arrested during the police raid which nabbed Masharipov.