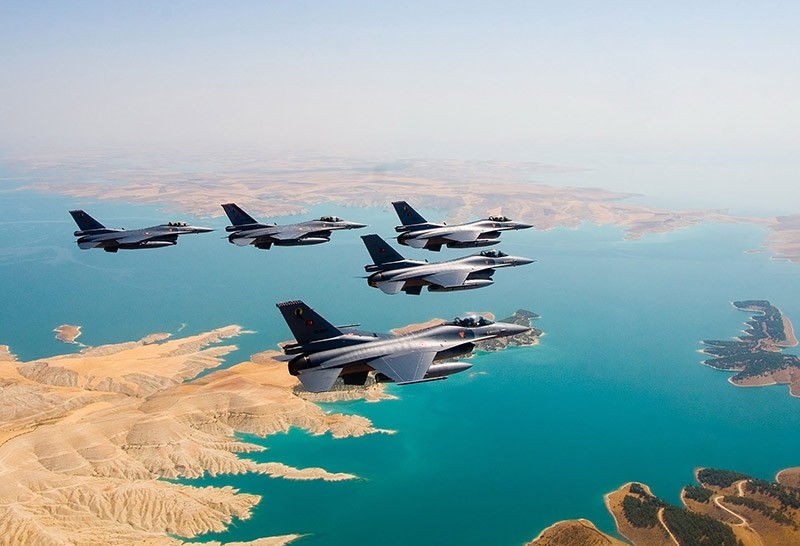 The Turkish military released a statement on Thursday about Operation Euphrates Shield, an ongoing operation in northern Syria to fight Daesh terrorists, providing up-to-date information on the military developments that took place between Jan. 18, 7 a.m. to Jan. 19, 7 a.m. local time.

"[A total of] 164 Daesh terror targets, including hideouts, defensive positions, command control facilities, weapons and vehicles were hit during the day," the statement also said, referring to the bombardments carried out by land and air.

The U.S.-led coalition was provided with the coordinates of three Daesh targets in Bzagah and Qabr al-Muqri identified by Turkish forces, which were later struck during the day.

The statement also highlighted the details of the Turkish-Russian joint operations which took place Wednesday in al-Bab.

Twenty-five Improvised Explosive Devices (IEDs) were destroyed by explosive ordnance teams over the span of 24 hours, adding up to a total of 2,975 since the beginning of the operation, while 43 mines were detonated.

On Aug. 24, 2016, Turkey declared that is was exercising its rights of self-defense codified under the U.N. Charter Article 51, and launched Operation Euphrates Shield. A National Security Council press release (Nov. 30, 2016) stated that the operation's objectives were to maintain border security and confront Daesh terrorism within the framework of the U.N. charter; it also emphasized that the PKK terrorist organization, as well as its affiliates the Democratic Union Party (PYD) and People's Protection Units (YPG), will not be allowed to establish a corridor of terror on Turkey's doorstep.

The campaign, especially in its initial stages, captured its operational targets rapidly starting from Jarablus. Operation Euphrates Shield cleared an area of 1,100 square kilometers within its first 50 days, and subsequently, secured an area of 2,000 square kilometers at the time of writing. In October-November 2016, capture of the territories to the east of Azaz-Mare, and Dabiq-a center of resistance for Daesh's morale and motivation - has played an important part in paving the way toward Al-Bab. Gaining this depth has been very important for Turkey's defense in preventing Daesh's rocket attacks, and for overcoming the Daesh terror threat posed by rockets launched by mobile platforms.

The al-Bab campaign will primarily consist of two main combat phases, and a subsequent "holding the town" phase. The first combat phase refers to the current situation in which Daesh is aggressively resisting in immediate areas surrounding al-Bab, whereas the second combat phase would begin after this resistance is broken. Most probably, the second combat phase will consist of clashes through which the terrorist organization aims to increase the costs of the campaign by using disruptive means such as improvised explosive devices (IED) and tunnels, and attempts to provoke the local populace.