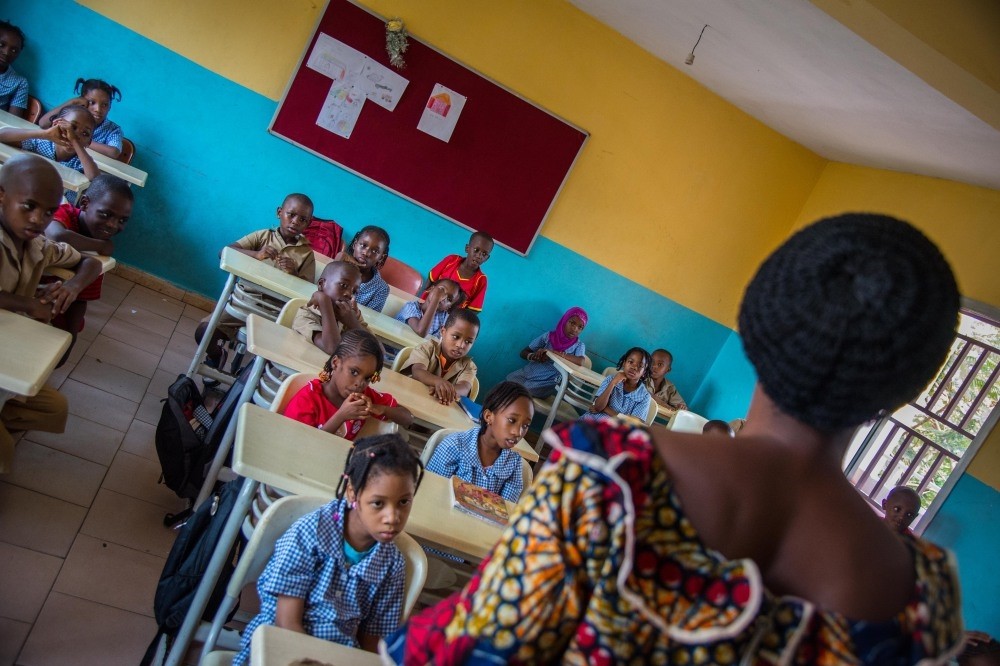 After three months, the Turkish Maarif Foundation has taken over FETÖ-affiliated schools in Guinea's capital Conakry. The institution has put things on track and started to run more than 10 schools at different levels throughout the capital

LIttle Adama Havva Balde Diallo was crying. The four-and-a-half-year-old girl's eyes turned red due to her constant crying through the night. She loved going to school, but her school was shut down. Adama's mother, Aissatu Lamarana Diallo, was speechless that night. Her little daughter could not grasp what the Gülenist Terror Group (FETÖ) meant and why its schools were closed down. In early October 2016, the Guinean government canceled the license of La Citadelle, a school chain in Guinea linked with FETÖ. The Maarif (Education) Foundation, authorized by the Turkish state, arrived in Guinea to take over FETÖ-affiliated schools. Maarif launched preparations to run the schools. 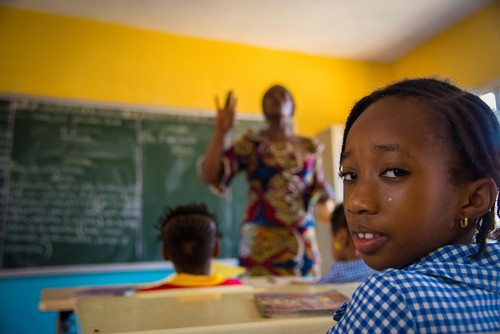 It was the start of the semester and hundreds of families were left in the dark and with question marks on their minds. What would happen now? Would the families have to enroll their children in other schools? Suare Bintanabe, 36, recalls those "difficult" times. "I had to enroll my children at a French school. We did so even though we did not want to," Binatabe said. 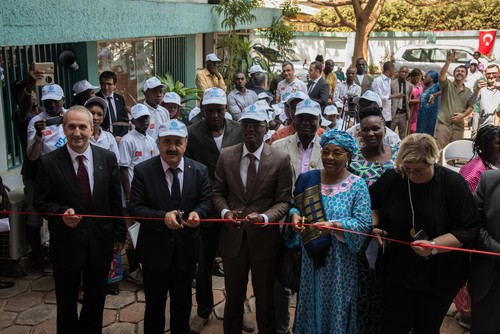 Adama shared the same fate as Binatabe's children. She was sent to another private school where she had to endure horrible treatment. "I learned that she was beaten at that school. She had nightmares and could not sleep for a long time," her mother remembered.

While parents and the students suddenly found themselves in a shocking turmoil, Maarif reacted fast. Three weeks after the Guinean government canceled the license of FETÖ, the schools re-opened under the name of Maarif Schools [Les Ecoles Maarif]. Having experienced one of the most distressing times of their lives, the families turned to the Maarif Schools. 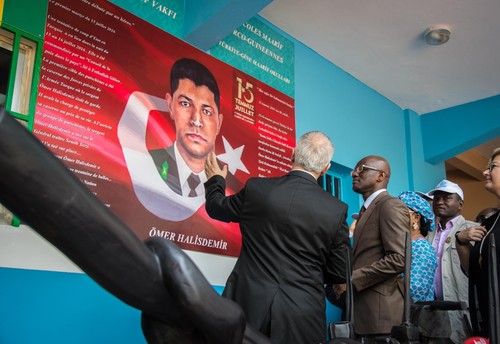 "I enrolled my Adama at the Maarif Schools without any doubt once I heard that they opened the schools," Diallo said. When asked about why she had no doubt, she pointed to the guarantee that the Turkish state provides.

Bintanabe has two sons in the 10th and 11th grades. Upon hearing the news, she turned to the Maarif Schools. "The Maarif Schools did not victimize us financially. They provided us a refund. Plus, they pay us more attention," she said. Binatabe and Diallo speak of "one truth." The Maarif Schools are disciplined and work in order, they told me. 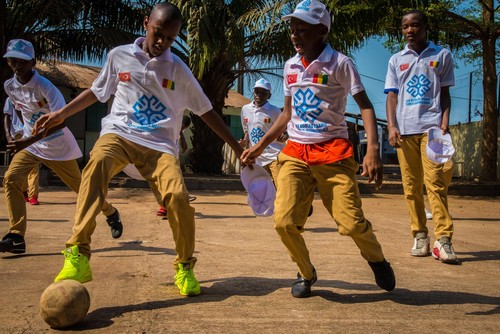 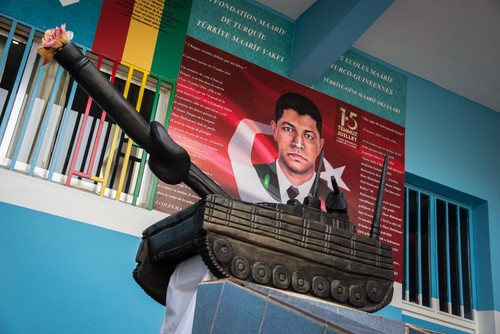 The foundation named the high school after Ömer Halisdemir, who was shot dead by Gülenist coup soldiers at the night of the coup attempt on July 15, 2016. Also, a placard welcomes students on the wall of the main building that tells the story of Halisdemir. Abdoullaye Fantasek confided in Maarif as well. His son did not study at one of the FETÖ's schools in the past, however, he enrolled his child at the Maarif Schools. "There is always attention paid to us and our children by Maarif. It's good," he said. 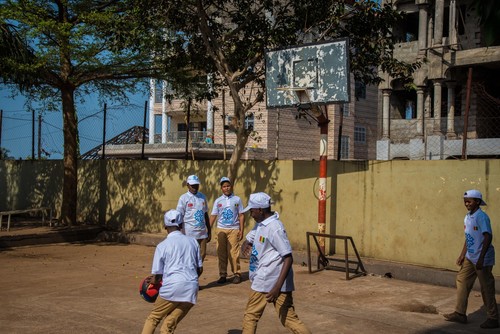 Apart from local teachers working at the Maarif Schools, the foundation also employs Turkish teachers. Recep Görmez, 31, an English teacher who is the director of a primary school in Conakry, is one of them. He had no ties to Maarif when he was offered the job two months ago. He was single and living in Istanbul at the time.

Maarif told Görmez that he would be assigned in Guinea, but there was a problem. Görmez needed to consult his family and he had a girlfriend for the past six years. "She agreed to come with me right away," Görmez said, adding that they tied the knot in a couple of days.Görmez has no regrets. "I did it for our cause. I would do it again. Teaching children something here is the most sacred feeling," he said passionately. Having left his homeland to offer something from him, Görmez eyes a more promising and successful career with his wife, who loves him so much to decide to marry him in a couple days and move to Guinea. Children I spoke to during the inaugural ceremony expressed their happiness with their schools, particularly with the new foundation. Doubtful minds and concerns the parents had seem to have quickly faded away, especially after Maarif reopened the schools in a very short period of time. 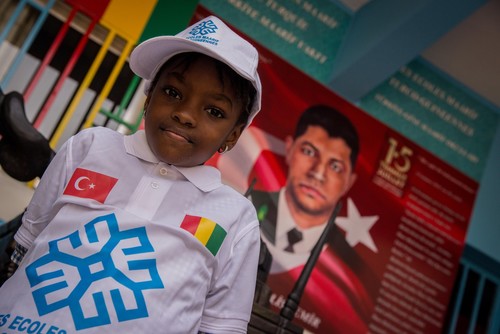 Turkish doctors traveled to Guinea with us as well. Attending the inaugural ceremony of the Maarif Schools, the doctors performed a routine health check on Guinean students. They attended to those in pain or with illnesses in particular.

Following the July 15 coup attempt in Turkey, the Turkish government sharpened its determination to eradicate FETÖ worldwide. In an attempt to wipe out FETÖ-linked schools abroad, the Maarif Foundation was authorized to take over the schools and run them.

President Recep Tayyip Erdoğan's special attention dedicated to Africa makes it a challenge for the Maarif Foundation to take over FETÖ schools in every corner of the continent in a short time. Guinea was the first country to hand over FETÖ schools, but not the last.

Judging by the comments of the parents and satisfaction of the students with their schools, Guinea will not be missing FETÖ. Fully supporting the Ankara-backed Maarif Foundation, the Guinean government seems to have closed all doors to the terrorist cult.
Last Update: Feb 02, 2017 9:43 pm
RELATED TOPICS