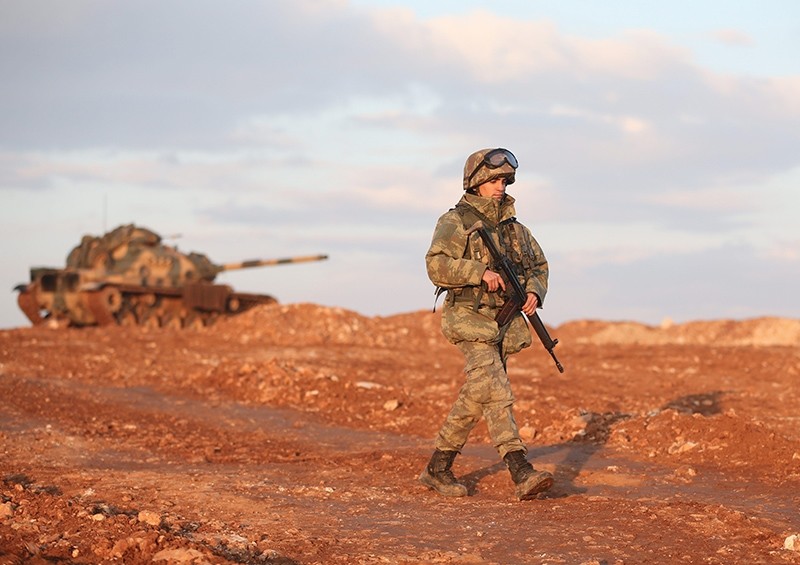 While fierce clashes between Daesh and the Turkish-backed FSA continue in the outskirts of al-Bab, the terrorist organization took a major blow on Sunday when the so-called al-Bab governor was killed in an anti-terror operation

Abu Khalid al-Urduni, the supposed Daesh-appointed governor of al-Bab, was killed on Saturday, Feb. 4, in counterterrorism operations, according to a written statement released by the Turkish military the following day.

News of Al-Urduni's death surfaced after Turkish military sources obtained the congratulatory address sent by Daesh's supposed Raqqa governor to the newly appointed governor of al-Bab. In his letter, the terrorist congratulates the newly appointed al-Bab governor, by wishing him all the best in his new position, and in the war against ''apostates,'' and the ''allies of the West.''

On the other hand, the so-called Raqqa governor asks the newly-appointed al-Bab governor to find a specific traitor in Raqqa and punish him, while he also noted that the traitor in question was the main person responsible for the heavy Daesh losses over the past week.

Meanwhile, another 33 Daesh terrorists were killed and four wounded by shelling and airstrikes carried out on the 166th day of Operation Euphrates Shield in northern Syria.

A total of 220 targets belonging to the terrorists have been strikes destroying hideouts, defense positions, command centers, weapons and vehicles. Thirty-nine targets have been hit by airstrikes, destroying 32 buildings, three headquarters, an ammunition depot, and two bomb-laden vehicles.

Gen. Hulusi Akar, the Turkish military chief of staff, visited army troops stationed in the southeastern provinces of Kilis and Gaziantep, bordering war-torn Syria, the military announced in a statement on Sunday.

The statement said Gen. Akar, accompanied by chiefs of air staff and commanders of the army, visited and inspected Turkish troops garrisoned in Kilis and Gaziantep.

Akar also visited the operations command centers from where the ongoing Operation Euphrates Shield and counterterror operations are led and coordinated.

The statement also added that Akar's visit in the region is ongoing.

The previous Barack Obama administration's plan to take Raqqa from Daesh by arming the PKK's Syrian offshoot, the Democratic Union Party (PYD) and its armed wing, the People's Protection Units (YPG), has allegedly been put aside by the new Donald Trump administration, the Washington Post reported in an article on Feb.2.

The article suggests that implementation of the plan prepared by Obama's foreign policy advisers, which foresaw arming the YPG for the Raqqa assault with armored vehicles, anti-tank weapons, Russian-made machine guns and mine-clearing equipment, was stalled because "there was no provision for coordinating operations with Russia and no clear political strategy for mollifying the Turks." Despite the newspaper's claim, recent reports suggested that the U.S. is continuing to send arms to the YPG. Also, President Trump's decision to keep Obama's special envoy for the Global Coalition to Counter Daesh, Brett McGurk, has been seen as continuation of the U.S.'s current position on the YPG.

Turkish officials have previously expressed their desire to see a shift in the newly-elected Trump administration's view on the YPG, reiterating that a terror group cannot be eliminated by using another terror group. Ankara has urged that the U.S. should stop arming and cooperating with the PYD and YPG.

An article published on Saturday in Rumiyah, Daesh's propaganda magazine, suggested that Turkey's anti-Daesh fight in northern Syria and the safe-zone plan that was expressed by Donald Trump aims to prevent the establishment of a Kurdish state in the northern Syria, the PYD-linked Aranews reported. "The taghut [tyrant] Erdoğan and members of his apostate government ramped up talk about the 'Safe Zone,' calling it a means of preventing the establishing of the Kurdish state," the Daesh magazine wrote.

The thoughts expressed by Daesh have also been uttered by the PKK's Syrian offshoot, the Democratic Union Party (PYD), which often complains about Turkey's Operation Euphrates Shield, a military operation launched by Turkey and Free Syrian Army (FSA) on Aug. 24 to clear Daesh terrorists from the Turkish-Syrian border.

The Daesh magazine not only provoked Kurdish people in northern Syria against Turkey by adopting the same tune as the PYD, it further asserted that Ankara has also tried to weaken the Syrian government.

"This is because the Turkish army's assertion of control over some part of Sham will be a means of great pressure on the Nusayri regime in the future," the Rumiyah magazine said.
Last Update: Feb 05, 2017 10:22 pm
RELATED TOPICS