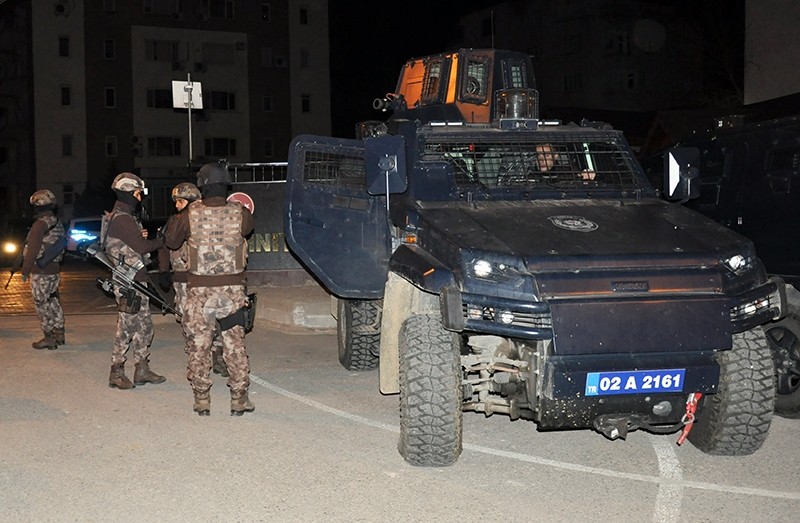 As part of one of the biggest countrywide crackdown operations against Daesh, hundreds of people linked to the terrorist group were detained yesterday as anti-terror police stormed places where suspects were staying

Turkey has launched what may be the biggest nationwide operations against the terrorist group. More than 400 people linked to the Daesh group, including ones planning attacks in Turkish cities, were detained on Sunday in nationwide operations that came amid Turkey's operations in Syria to "neutralize" the terrorist group. The number of detainees was expected to increase even as Daily Sabah went to print with report of a new operation coming almost every hour throughout Sunday.

Daesh is behind a string of attacks in Turkey and the most recent one occurred during New Year's Eve at a popular Istanbul night club, where a lone gunman gunned down 39 revelers. Sunday's raids targeting the terrorist group come a few weeks after that gunman, identified as Uzbek-born Abdulgadir Masharipov, was captured. He was part of the terrorist group's sleeper cells in the country and media outlets speculated that the nationwide operations might be the result of his testimony.

Indeed, nine Syrian Daesh suspects captured in the western city of İzmir were reportedly planning an attack in the city, which has been a popular hub for Syrian migrants to illegally cross into Europe by sea. In the early hours of Sunday, anti-terror police stormed residences, warehouses and other places where suspects were staying. Armed to the teeth and behind bulletproof shields, officers used battering rams to break into buildings. The suspects detained in the operations did not offer any resistance against the officers.

The first operations were in the capital Ankara where some 60 suspects, mostly foreigners whose nationalities have not been revealed, were rounded up in Sincan, Çubuk, Yenimahalle and Mamak, all working-class districts and suburbs.

In Istanbul and its neighboring Kocaeli, 18 suspects were captured in operations spanning from the working-class Sultanbeyli district to Beyoğlu, where Taksim Square and other popular locations are located.

Fourteen foreigners, including ten underage suspects, were also captured in the operations and have been scheduled for deportation back to their home countries. Again, their nationalities were not disclosed.

Anti-terror police discovered documents and "digital material" in possession of suspects that contained Daesh propaganda and information about the activities of the terrorist group.In the southeastern city of Şanlıurfa, which is located on the Turkish-Syrian border, 150 people were detained in operations that targeted houses and hotels where Syrian nationals were staying. The raids were a culmination of a surveillance operation, according to local media reports. More detentions are expected as the operations in the city were still underway when Daily Sabah went to print.

In Gaziantep, another city bordering with Syria, police raided 51 houses and detained 47 suspects. Police also confiscated computers and documents found on location. Gaziantep was targeted by the terrorist group in the past where a street wedding was attacked by a suicide bomber who killed 57 people on Aug. 20, 2016.

The city is known for its proximity to the border with Syria, where the terrorist group reigned over several towns by exploiting instability stemming from the civil war. Police raided several sleeper cells in the city last year, and one Daesh militant blow himself up during one of the raids.

In Bursa, an industrial hub south of Istanbul, 46 Daesh suspects were detained in the operations.

More than 30 others were detained in the central city of Konya and over 40 others are being sought by police for detention. Suspects are accused of giving "logistics support" to Daesh and accused of sneaking into Syria to fight for the terrorist group. Konya was the city where Masharipov stayed after he arrived in Turkey and media reports said the detainees might have links to the suspect.

In the southern city of Adana, 25 suspects were detained in the Kiremithane and Yeşilbağlar neighborhoods of Yüreğir district. Some 500 police officers raided homes in the operations. Detainees are accused of planning "astonishing" attacks.

Nine suspects captured in the western city of İzmir are accused of planning attacks. The suspects, all Syrians, traveled at times to Syria to fight for Daesh, media outlets reported.

Elsewhere, police captured ten suspects in operations in Adıyaman, a southeastern city where several Daesh suspects involved in the past attacks by the terrorist group in Turkey originated. Police raided 52 locations across the city to capture the suspects.

The terrorist group has frequently threatened Turkey and one of the most recent threats was a video showing a hooded man with a backpack passing by police cars and popular landmarks of Istanbul where the group carried out its first major attack in January 2016, killing a group of German tourists near the famous Blue Mosque.