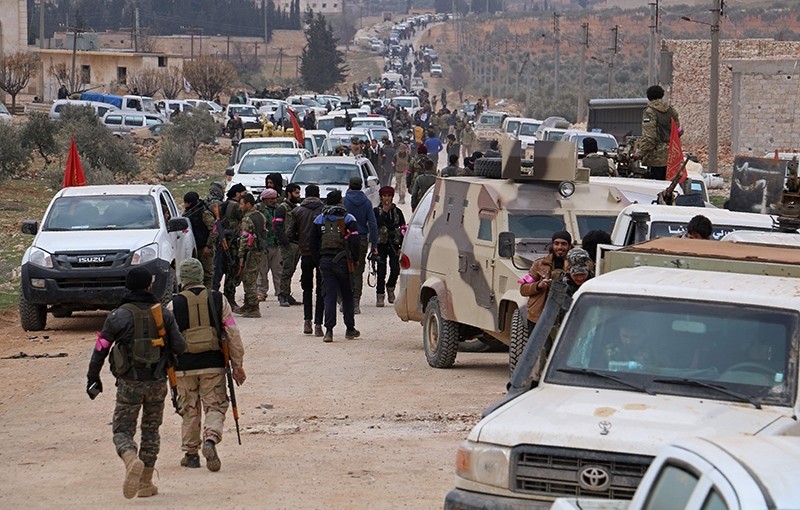 Turkey-backed-opposition fighters regroup as they advance on the western outskirts of the northern Syrian city of al-Bab (AFP Photo)
by Daily Sabah with Agencies Feb 11, 2017 12:00 am

Turkey-backed Syrian opposition forces say they have advanced inside the Daesh-held town of al-Bab, in northern Syria, the Associated Press reported on Saturday

The opposition forces announced Saturday on Twitter that they had taken the city's silos and sports complex in its southwestern districts. The coalition's operations room released a video on social media showing its fighters at the gates of the Hikma hospital. Britain-based Syrian Observatory for Human Rights monitoring group also reported the hospital's capture.

AFP also cited a statement by the Britain-based Syrian Observatory for Human Rights: "Turkish forces and allied rebels in the Euphrates Shield campaign entered the western edge of the town and took control of a number of areas."

Meanwhile, the Turkish General Staff released a statement later in the day, saying that one Turkish soldier was killed and another was injured during clashes between Turkish troops and the Daesh terrorist organization amid the ongoing Operation Euphrates Shield in northern Syria's Al-Bab.

Al-Bab is 40 kilometers (25 miles) south of the Turkish border.

Another statement released by the military early in the day said that a total of 43 Daesh terrorists had been killed in northern Syria on the 172nd day of the Turkish-backed operation.