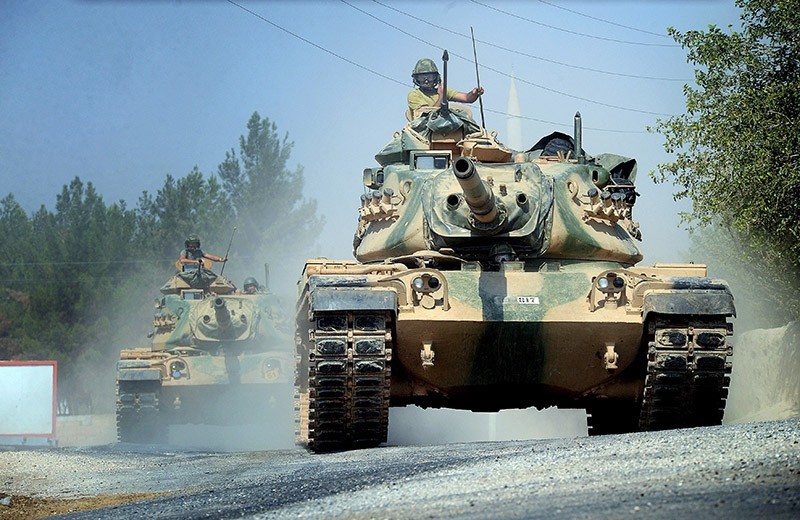 Turkish tanks enter Syria. (File Photo)
by Daily Sabah with Agencies Feb 15, 2017 12:00 am
Turkish airstrikes and artillery shelling have killed 17 Daesh terrorists as part of the operation to liberate the northern Syrian town of al-Bab from terrorists, the military said Wednesday.

The statement issued by the Turkish military provided up-to-date information on the developments that took place between Feb. 14, 7 a.m. (GMT 4 a.m.) to Feb. 15, 7 a.m. local time.

A total of seven Free Syrian Army (FSA) soldiers died in a Daesh attack targeting a provisional army base settled in the south of al-Bab, as a group of terrorists, believed to number between eight and 10, opened fire and detonated a car bomb near FSA fighters. The statement also noted that eight terrorists were killed during the clashes.

The release also said that three Turkish soldiers have been wounded after their Kirpi-type, mine-resistant armored carrier rolled over. The wounded soldiers do not run any serious health risk, and have been taken to the military hospital.

The Turkish army is supporting FSA fighters in liberating al-Bab, a strategic city for Daesh, from the terrorist group. Tuesday marks the 176th day since the city was surrounded in order to liberate it.